Now that we had figured out where all the power was being used in our house, we started trying to reduce our consumption. We are not Luddites. So a key requirement was that we not lose any functionality—at least not any functionality that we actually use.

As mentioned above, a major way to save power in the home is to replace incandescent light-bulbs with CFL and LED bulbs. While these lead to major savings, there can be some caveats. If you are into home-automation (like we are), “smart” lightbulbs that connect to your Ethernet either through WiFi or Bluetooth to a hub are a must have. But, this functionality may mean that your bulbs are using power 24/7. For Phillips hue bulbs, we measure this to be about 0.3 watts. Other brands may use significantly more.

One of the first things we did was to put our power-hungry digital video recorder on a timer. This is a homebrew home theater PC that we could safely shut down using a Linux task scheduler before cutting the power with the timer. There was no need for the device to be on from midnight until 9 am and other times when we are not home and are not interested in recording any TV shows. Since this device uses about 40 watts when on (and close to 4 watts when off but still plugged into a live outlet), cutting down the time when it receives power leads to big savings. 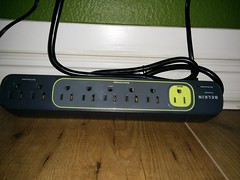 Belkin smart power strip. The green outlet is where one plugs in the control device. 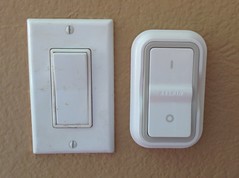 We added another product from the Conserve line, the smart power strip, to our media center setup. What is “smart” about this strip, and other strips like it, is that you can cut the power entirely from peripheral devices when a control device is turned off. In our case, we use the TV as the control device. When the TV is turned on, our subwoofer, Wii, and a couple other peripheral devices are powered on. When the TV is turned off, all power is cut from these devices. It works great and is no less convenient than before. In this way, we pay only the 24/7 standby power costs of the TV and the strip itself (which is approximately 0.3 watts) instead of the standby power of all of these devices (which for the subwoofer, in particular, is quite high). Similarly, in our office, we added a power strip with an on-off remote control that is capable of cutting and restoring power to our computer, printer, and other peripheral devices. The remote can be mounted on the wall and actually makes turning on the computer more convenient.

In some areas of our house, we had GFI outlets in places where we never intended to plug anything in. For these cases, we now save power by simply turning off the breaker on the circuit containing the GFI. This can also be done for the furnace breaker in the summer, when we have no intention of turning on the heat. This alone saves 8 watts of power usage for most of the year. Other devices, like the cable subscription amplifier, we discovered could be simply unplugged without negative effects (since we don’t have cable). In addition, we replaced our lighted doorbell button with an unlighted button.

Saving a few watts here and there may seem trivial, but savings of 1 watt over the course of the year amount to about 8.8 kWh hours of energy use. For us, even at the lowest tiered rate, that is about $1.50. And if you are going above the first tier, the rate is much higher.

With these optimizations, we can practically reduce our 24/7 standby power draw (including devices like the modem and router intentionally left on 24/7) to about 60 watts. It would be difficult to further reduce usage without taking significant hits to functionality and usability, or making a major investment in new appliances (like a new microwave that doesn’t constantly consume 6 watts of power!). Adding a switch to the microwave would be problematic, because the microwave can draw over 15 amps and because the flashing clock face would be annoying and would need to be reset after losing power. At the end of the day, by replacing our lightbulbs and making the other changes discussed above, we’ve reduced our power bill by approximately two-thirds.

Is it crazy to determine to a fraction of a watt where all the power in your home is being used? Sure it is. But if you are data nerds like we are, it empowers you to really control your home. And for us, that’s the difference between owning a home and just living there.

(Previously in Part 1: Measure Where All Your Power Is Being Used Part 1
and Part 2: Using Your Smart Meter and Circuit Breaker to Measure Everything Else)

Measure Where All Your Power Is Being Used, Part 2

Using Your Smart Meter and Circuit Breaker to Measure Everything Else