A version of this article appears in the Summer 2017 issue of Home Energy Magazine.
SHARE
Click here to read more articles about Archive

Much of our industry’s knowledge base and best practices cannot be found in textbooks. Our craft is largely disseminated through conferences, specialized training, magazine articles, word of mouth, and, increasingly, the Internet. It was obvious to me a long time ago that the industry needed an online forum to facilitate knowledge sharing among fellow pros. No one individual has all the answers, but the collective wisdom of industry practitioners is immeasurable.

David Butler has practiced as a building systems engineer since 1985.

In 2009 I approached Home Energy Editor Jim Gunshinan about sponsoring a pro-to-pro forum for home performance professionals. Gunshinan liked the idea and agreed to pursue it with his board. In the meantime, he suggested that I check out a new home performance group on LinkedIn. Being averse to Facebook and social media sites, I reluctantly signed up for LinkedIn and joined the RESNET BPI - Energy Audit and Home Performance group. (Despite its name, the LinkedIn group was never affiliated with RESNET or BPI, though many of its members have ties with one or both organizations.)

At the time, the group had fewer than 100 members and not much was going on. While my initial impression of the LinkedIn Groups platform was not good, it didn’t take long for me to get sucked into this small but growing community in a big way. Turns out I was the only mechanical designer in the room at the time, and people were posting all sorts of nonsense related to HVAC.

I discovered that helping out fellow home performance pros with HVAC design advice was addictive.

I soon found myself assisting group founder Claire Rutiser to moderate the group—a job that she eventually handed over to me. During the first couple of years, my moderation style was decidedly low key—most members didn’t even realize we had a moderator. That necessarily changed as membership grew into the thousands. 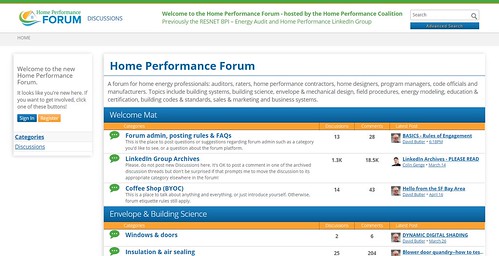 In recent years, LinkedIn has watered down or eliminated features such as e-mail notifications in an effort to reduce the time and cost of supporting over 2 million groups. Many of these changes have been detrimental to technical topic-oriented discussion groups. Even at its best, the LinkedIn platform was a compromise for groups like ours, rich in content.

By far the most important motivation for relocating the group was to make the content more accessible to the membership by organizing discussions into topical categories and providing a much better search engine. A wealth of knowledge is hidden in the group’s historical record. I’ve been involved in residential energy efficiency in one way or another for more than three decades, and rarely a week goes by that I don’t learn something new.

Once the decision was made to move the group, I began collecting the archives, with the help of some of our most active contributors. We ended up porting approximately 1,600 topics with 22,000 comments to the new forum.

The next challenge was to find a new host. Although I could have stood up the forum on my own, I thought it was important to partner with an organization (preferably a nonprofit) in order to ensure the forum’s long-term viability.

Visit the Home Performance Forum and join the discussion.

Learn more about the author.

The obvious choice would have been for one of the group's namesakes to host the new forum; however, partnering with either BPI or RESNET would potentially alienate a significant portion of the membership. That made no sense. HPC is the ideal host, since it is well known to industry practitioners and has never been a wedge issue in group discussions. “At HPC, we are mindful that collaboration is at the heart of everything we do. I can’t think of any endeavor more appropriate to this philosophy than serving as host to our industry’s preeminent online community,” says Brian T. Castelli, HPC’s president and CEO.

Although the forum remains strictly pro to pro, unlike the LinkedIn group, its content is publicly accessible via Google and other search engines. This will help drive membership growth as well as expose a much wider audience to home performance and building science concepts.

Macie Melendez contributed to this article.