A version of this article appears in the Winter 2018 issue of Home Energy Magazine.
SHARE
Click here to read more articles about Editorials

California just approved legislation requiring all new garage door openers to have battery backups, so that doors would open even when electricity service is interrupted. The legislation—SB 969—sailed through with almost no opposition. Curiously, the only group to oppose the bill was the industry responsible for garage doors, the people most likely to benefit from it. What’s going on here, and what does this have to do with climate change and home energy? More than you might imagine.

The origin of the requirement for battery backup of garage doors is easy to explain. Last year’s tragic fires in Northern California trapped residents in their garages after power failures prevented them from opening the doors and driving away from the fast-moving flames. Several people died because they couldn’t open the doors manually. Hence the new law. This year’s fires are even worse, and some California utilities now shut off power in certain areas as a precautionary measure to prevent their lines from sparking during high-wind events.

The climate change connection is almost as easy to explain. The entire western United States (and Canada and Mexico) is becoming drier. The fire season, which traditionally ended in October, now extends into December. Climate change has also changed the character of the fires: A firestorm now better describes their size, speed, and ferocity. Whole communities can be reduced to ashes in minutes (as this year’s fires demonstrated).

What is the home energy connection? Those batteries need constant recharging, which adds another continuous load in each new home, perhaps as much as 5 watts (50 kWh per year). That’s about a 0.5% increase in an average home’s electricity use and moving us in the opposite direction from our net zero goals, but perhaps still justified for the safety benefits it affords the occupants of a new home.

It’s the batteries that deserve scrutiny. These batteries—typically 12V lead acid—need replacement every two years. At about $30 each, they cost more than the increased electricity, introduce a maintenance headache, and create a new waste stream. The garage door industry opposed the backup battery requirement because its products are not designed to provide emergency egress and it fears it will be liable when a battery fails to deliver during an emergency. Surely there is a better way to provide a safety service without all these attendant problems. 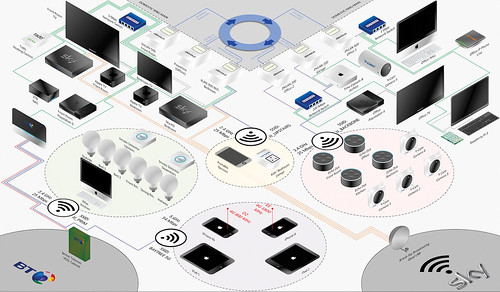 The better way might be a direct current (DC) network operating in the home. More and more appliances need backup power in case of power outages. The most important ones involve communications: a modem, a router, and chargers for cellular phones. Service providers of voice over IP (VOIP) phone connections are already required to make available a battery that can sustain telephone operation for several hours. Everybody keeps flashlights around in case of an outage, but a few emergency lights strategically placed around the home would be even better. Laptops operate very nicely on DC, too. A single larger battery offers many economies, as well as ease of management. A DC network could include a small dedicated PV collector to operate mostly grid-free. Poorer households and apartment dwellers might find this approach to be a sensible first step into renewables.

It’s easy to think of climate change as something monolithic and all-encompassing the impacts of which are difficult to grasp. In fact, the impacts of climate change will first appear as extreme weather events with very specific consequences. The humble garage door opener is an unlikely early flashpoint of these extremes, but it won’t be the last. With some creativity, though, we can find solutions that make us more resilient while saving energy.