BY HESHMAT A. AGLAN
WEB ONLY

This online-only article is a supplement to the September/October 2014 print edition of Home Energy Magazine.
SHARE
Click here to read more articles about Healthy Homes

Tuskegee University (TU)’s previous flood damage resistance work was described in three earlier articles (“After the Flood—There’s Hope,” HE Sept/Oct ’04, p. 18; “Flood Testing Gets a Reality Check,” HE July/Aug ’06, p. 18; and “Impact of Oil-Contaminated Floodwater on Building Materials,” HE July/August ’14, p. 26). This article describes our more recent testing of common building materials exposed to floodwater, and the development of mold on these materials. It also describes the impact of accelerated, mechanically induced drying, and the results of our mold remediation effort.

In 2010–12, as part of a project sponsored by the Southeast Region Research Initiative (SERRI) TU, along with Mississippi State University (MSU) and the Savannah River National Laboratory (SRNL), examined the development of mold on plywood sheathing, wood studs, gypsum drywall, and fiberglass batt insulation. Our goals were 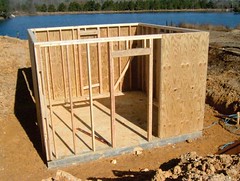 Tuskegee flood test unit under construction. The floodwater came from the lake in the background. 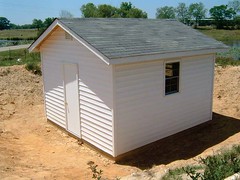 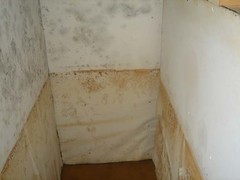 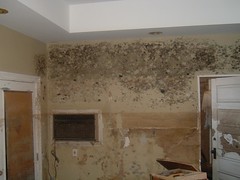 A New Orleans home after Katrina. 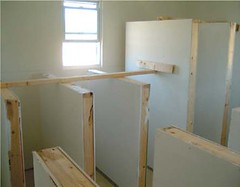 Interior photo shows the additional sample walls that would be exposed to flooding. 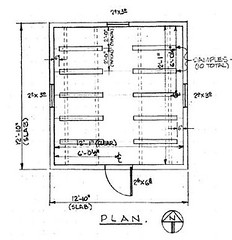 Flood test unit floor plan shows the additional sample walls that would be exposed to flooding. 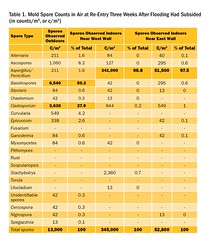 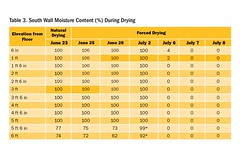 We constructed a 12-foot × 12-foot × 8-foot test unit on a concrete slab. The walls, from outside to inside, consisted of vinyl siding, house wrap, plywood sheathing, wood studs, fiberglass insulation, and gypsum drywall painted with latex paint. Photos show the flood test unit under construction, and completed ready for testing. Inside the test unit we placed an array of 10 sample walls that were also exposed to flooding, to allow for additional tests and analyses (see Figure 1). The interior wall samples consisted of 2 ×4 studs, drywall both sides, open cavity.

We located the test unit near a pond, where a pump could transfer the pond water to a diked area surrounding the unit. The water then flooded the unit. This water remained for a period of three weeks. We then drained the water, and left the unit untouched for another three weeks.

Before flooding the test unit, we embedded sensors into the walls to measure moisture content. The wiring from these sensors went through the vents on the north and south walls of the unit to a control room located nearby. We also monitored interior temperature and relative humidity throughout the testing.

After opening the test unit, we attempted to remove the moisture, first, by natural drying for a period of 12 days(June 21–July 2, 2010).This involved opening the windows and door to allow natural movement of the air through the unit. This approach had worked successfully on our short-term flood tests accomplished in the early 2000s that was described in the Home Energy articles mentioned above. It was also the norm for houses exposed to Katrina flooding in New Orleans. However, after 12 days of natural drying, our monitoring showed that all the materials were still fully saturated, and we decided to continue with forced drying.

For the forced drying, we used a dehumidifier and an air conditioner; the latter was used to control the interior temperature of the test unit. During both the natural and the forced-drying procedures, we measured the moisture content of the gypsum boards of the interior walls. Measurements were taken at 6-inch intervals vertically along each wall.

The south wall of the test unit dried the fastest. Our measurements show the effect of natural drying versus forced drying (see Table 1). Solar gain on the south wall had begun to reduce the moisture content such that dehumidification returned the materials to pre-flood moisture levels in about four days.

Detection and Evaluation of Mold

We used an Air-O-Cell cassette, which draws air across a substrate where particulates deposit, to identify and count the mold spores. We collected these spores, first, from the outside air before we opened the test unit, and second, from the indoor air in the test unit just after we opened it. We took a second set of readings after the drying period but before remediation, then a third set after remediation. All the samples were sent to EMSL Analytical, Incorporated, for analysis.

We also implemented a biological sampling plan to determine the extent, nature, and type of mold present on flood-impacted surfaces to go along with the three sets of air sampling tests. We took surface tape samples to microscopically examine building components where mold growth was suspected, and we took surface swab samples to determine the particular species of mold present on building components where mold was evident.

The molds identified in our sampling match very closely the molds identified in post-Hurricane Katrina studies (see Table 1). The paper vapor barrier on the batt insulation showed the greatest concentration of mold, followed by the paper faces of the drywall and then the plywood sheathing. The solid wood studs, vinyl siding, and house wrap all supported very low concentrations of mold.

After the flood test unit had dried for approximately seven months, but before remediation, we performed the second set of tests. The species and concentrations of mold found above and below the floodwater line changed drastically (see Table 2). Drying also decreased the total spore count found in the air samples inside the test unit by 95% near the west wall, and by 66% near the east wall. After remediation, we performed the third set of tests; total spore counts had decreased by 98% and 85% respectively.

TU led the task of testing mold remediation strategies, with MSU support. We cleaned and refinished the exterior and interior walls in accordance with cleaning and restoration industry recommended practices for mold (see “Protocol for Mold Remediation”. In three walls out of four, we replaced the gypsum drywall and batt insulation, because the paper faces of the drywall had delaminated. We used Sporicidin to wash the walls of the test unit and the test samples. When the gypsum drywall was dry, we painted it with Kilz primer. Where the drywall had sufficient integrity, we did not replace it, or the batt insulation. Instead, we washed the wall with Sporicidin, let it dry, and primed it with Kilz.

The swabs of the remediated exterior wall that was cleaned and painted, but not replaced showed medium to high levels of spores on the paper vapor barrier of the batt insulation and non-exposed sides of the gypsum board. The swabs of studs showed rare to low levels of spores. Swabs from the walls that had been replaced did not show a significant level of spores—that is, anything above the natural outdoor spore level.

Our flood test unit provided a good model for examining the molds that result during flooding such as occurred in New Orleans after Hurricane Katrina. The mold spore concentrations and species observed in the air and on the materials are consistent with those expected for a flooded building. The changes in the mold spore count following drying and remediation indicated the effectiveness of these procedures in producing an indoor environment that is at least comparable to the outdoors as far as spore counts are concerned.

Our experiments confirmed many things that we know about flooding and the resulting development of mold on building mat.

The following protocol, from SERVPRO, was used during the project:

The spores dropped from 52,800–345,000 range upon opening the test unit after flooding to 17,700 after drying the test unit to pre-flood moisture levels. Our use of forced drying expedited this process. This in turn would make it possible to implement remediation, restoration, and re-occupancy much sooner.

Unfortunately, many flooded residences lose access to electricity. This makes the use of mechanical drying equipment challenging. Professional restoration services could be used to dry out these houses, but these services are expensive. They are usually used only on high-value commercial and institutional structures.

Our earlier tests of short-term floods (three days of flooding, five days before the start of drying) were described in the HE articles cited earlier. These tests indicated that natural drying returned the unit to pre-flood moisture levels with only light to moderate mold development. On the other hand, the test of long-term floods described in this article(three weeks of flooding, three weeks before the start of drying) indicated that natural drying was ineffective, and that a delayed return to pre-flood moisture levels resulted in significantly greater mold development.

We feel that at least part of the reason why natural drying was ineffective was that the test unit included ten additional wall samples inside. This increased the ratio of amount of wetted material to interior air volume. The samples retain extra moisture during flooding; they are analogous to household furnishings that hold water, such as wood cabinets, curtains, beds, overstuffed furniture, and so on. Standard flood recovery practice recommends removal of these items as soon as possible after a flood. Our tests support that recommendation.

Once these moisture-retaining items are removed, natural drying can help to limit mold development. Low exterior humidity and air movement will provide drying if there are enough open doors and windows. Interior rooms like closets and bathrooms would benefit from forced or mechanical drying if power is available. Fans work well with natural drying. Dehumidifiers work best in enclosed spaces.

We found that the use of building materials that hold moisture and provide “food” for mold spores, if left untreated, can support long-term mold growth. The paper vapor barrier on fiberglass insulation and the unexposed paper facing of the adjacent gypsum drywall showed mold growth two years after remediation had occurred. These materials should be replaced when a flood-damaged home is restored.

My recent attendance at a Building Science Fundamentals seminar given by Joe Lstiburek and John Straube has motivated me to tell the story of my own basement. I am an architect, a professed defender of ...