BY CHRIS BAKER
WEB ONLY

Anyone who has been in the building science industry for more than a month probably knows what room pressure tests are, and why we would bother to run them.

Back in early 2012, when I taught at the Southwest Building Science Training Center in Phoenix, Arizona, I had no problem explaining the concept of room pressure issues, and the negative impact they have on a home, HVAC equipment, and human comfort. I could use my digital manometer, smoke stick, and infrared camera to demonstrate and measure the problems we see in a home with a centralized return duct system and interior doors. And if you have ever performed a combustion appliance zone (CAZ) test, you know an even more important reason why we measure such things.

One question I had no answer for, and always got from my students, was “How much?” Invariably, at least one student in every group would ask me to quantify energy savings, or comfort improvement. Of course that wasn’t a question that I could answer blindly with an average number per pascal. And I was frustrated because, no matter whom I asked, or where I searched, I couldn’t find an accurate way to answer the question. Strangely enough, contractors are continuously installing passive returns through low-income weatherization and home performance programs. Jump ducts (one particular version of a passive-return system) are now so common in Arizona that they have become standard equipment in almost all new construction. If you ask the builders why they install them, you will hear something about comfort. If you ask the HVAC installers, they will say they get fewer callbacks because of comfort. If you ask the energy auditors, they will mention comfort, energy savings, and indoor air quality. But none of them can tell you “how much” of any of these benefits jump ducts provide—and with good reason. Every house performs differently. 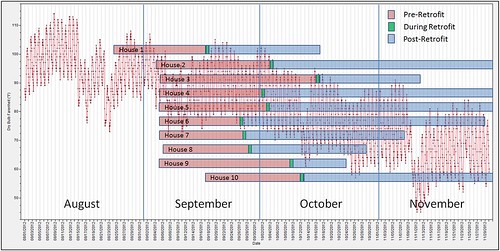 Figure 1. The outdoor temperatures for each day of the study and the time of day that data was logged for each home during the months of August through November. 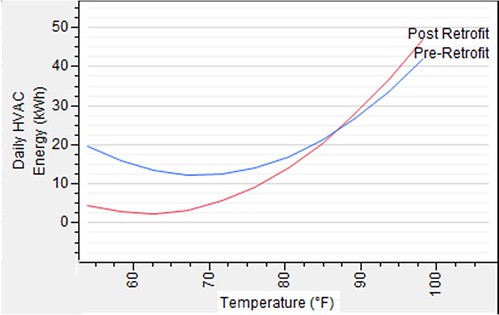 Figure 2. The model interaction in this temperature regime suggests HVAC energy use may increase due to passive return installation.

At the time, I was working closely with the Arizona state energy office, and I found out that they had a few extra research dollars and an existing open contract with Advanced Energy, both of which were due to expire shortly. So I did what any building science nerd with a question and no answer would do. I suggested that the state help us try to quantify a particular measure we have been installing for years in the weatherization and home performance programs, but with no quantitative way to measure its impact. My pitch was pretty simple. Everyone is installing some form of passive-return system, and we all know why based on the science behind the measure, but we don’t count it when we calculate our savings-investment ratio, and there are no utility rebates attached to the measure. What we need is a way to quantify these benefits so that we can make installing a passive-return system a stand-alone measure, like duct sealing or insulation.

I was able to facilitate an agreement between the state energy office and Advanced Energy to perform a study that would answer these questions. Unfortunately, however, the state had only $80,000 and a few months to spend on this study. For this reason, the study became more of a proof-of-concept project than a full-blown research project. No problem, I thought; let’s collect as much data as we can, see what the data show, and maybe we can provide at least enough evidence to justify a larger study in the future. With limited time and an even more limited budget I quickly went to work with Advanced Energy. Working with Charlie Gohman, the manager of Arizona Home Performance with Energy Star, and with John Tooley, senior building science consultant with Advanced Energy, and Keith Aldridge, vice president of corporate services for Advanced Energy, I got to work on developing a plan. Several sections of this article are taken directly from the final report.

Our budget limited us to ten homes. To limit variability, the characteristics of these homes were as follows:

Once the homes were chosen, we conducted basic home performance diagnostics and occupant surveys to set the benchmark. The site data that we collected were as follows:

Each home was equipped with 11 Wi-Fi-enabled OmniSense data-logging instrumentation products. These consisted of 7 temperature and RH sensors, and 4 power draw sensors for the HVAC systems. All of these instruments were installed in the same places in each home.

The sensors communicated to us via the cloud through a matching Wi-Fi router. We collected data on temperature and RH from all over the home every five minutes and on power consumption of the air handlers and compressors in the HVAC equipment every minute. All of these data were accessible at any time via a secure web portal. All of these data were compared to outdoor temperature as measured by the Phoenix Sky Harbor Airport.

Once we had collected these data on all ten homes, we surveyed the homeowners with over 60 questions. Some of these questions were designed to determine lifestyle habits. Others were general questions about comfort, and about how the owners felt their homes performed.

To give the homeowners an incentive to participate, we offered a free passive-return system valued at over $1,400 at the midpoint of the study and a $100 gift card once they completed the final survey. All they were asked to do was to complete two surveys, one before and one after the study; to try not to mess with their thermostats; and to leave all bedroom doors closed except when entering or leaving a bedroom for the entire duration of the study, which for most homes, ran from the beginning of September through the end of November.

The concept on which the study was based was simple. For approximately three weeks, there were room pressure problems. Then a crew installed a high-quality jump duct system to reduce all room pressures to below +/- 3 Pa. The doors were to remain closed until we returned to retrieve all our data loggers and to conduct the final survey.

Figure 1 shows the outdoor temperatures for each day of the study, and the time during which data were being logged for each home.

Regression of the data collected regarding residential HVAC energy use data with ambient temperature data for the Phoenix area yielded a result that suggests that passive-return retrofit is a significant factor in determining home HVAC energy use. The modeling effort undertaken here suggests that passive-return retrofit status interacts with outdoor temperature in such a way that the presence of passive returns during times of moderate outdoor temperature appears to reduce HVAC energy use compared to traditional construction. However, this apparent energy reduction is reduced and potentially reversed during periods of high temperature. Due to the limited time during which the present study was conducted, it did not address the year-round effect of passive returns. However, it appears that installing a passive return during periods of moderate temperature may produce a modest energy benefit.

Figure 2 shows the interaction between the retrofit status and the outdoor temperature. The short answer is that we saw a 9% savings in HVAC energy reduction over the period of the study. Another way to look at it would be to say that we saw a projected average annual reduction of 818 KWh. There are some pretty heavy caveats with this number, however. The data suggested that when the outdoor temperature exceeded 90°F, HVAC use increased with the use of a passive-return system. While that may not be much of an issue where most people live, in Phoenix outdoor temperature exceeds 90°F for 22% of the year, which could negate the positive effects we did observe. We are not sure why energy use would increase during very high temperatures; this calls for more research. During the period when this study was conducted, outdoor temperatures ranged mostly between 65°F and 90°F.

Given these provisos, homeowner satisfaction results from this retrofit measure are encouraging. The consistent scoring improvements and anecdotal comments from the homeowners suggest that this retrofit measure tends to be beneficial. Before the retrofit, homeowners reported discomfort and generally poor cooling distribution throughout the home. After the retrofit, some homeowners said they were more satisfied with the distribution of cooled air, some adjusted their thermostats several degrees up, and some did not use their cooling system at all, due to cooler outdoor temperatures.

One issue that neither the study nor the surveys addressed was the question of whether people consistently keep their doors closed. Failure to address this issue was a flaw in the study. We asked the ten households to keep their bedroom doors closed at all times for the entire study, and we could see when a door was left open, because this caused a noticeable drop in the RH level in the bedroom. But we never asked the homeowners if they normally left their doors closed. A future study might consider monitoring door positions without influencing the occupant’s behavior with respect to doors. While this study was centered on assigning a monetary value to the use of a passive-return system. I found it interesting to note that bedrooms had significantly higher RH levels preretrofit than they had postretrofit. Several bedrooms reached RH levels in the mid- to high 60% range when occupied, while outdoor RH averages only 20% at this time of year.

At the start of this project, both the Southwest Building Science Training Center and Advanced Energy realized that contributing in-kind services to gather additional data for future research projects would benefit the industry. We recommend these topics for further research:

At the end of the study, everyone who worked on it agreed that the results provided a good proof of concept, but were not conclusive. We simply did not have the budget to support a more-definitive result. If I had my way, I would look at hundreds of homes over a two-year period in several climate zones and with a greater emphasis on air quality. We do believe that this small study provides enough evidence to justify a larger, more-comprehensive project that could tell us how much energy a passive-return system saves in each climate annually.

On a personal note, listening to, and reading the comments from, these patient volunteers before and after the passive-return systems were installed has convinced me to convince my family to keep their bedroom doors ajar since 2012.