BY SETH FAWCETT
WEB ONLY

In the summer of 2005, shortly after buying what he thought would be his dream house, Ron Notes realized he had a problem. The house, as it turned out, was more of a nightmare than a dream. The downstairs was frigid in the winter and the upstairs was stifling in the summer. Utility bills in both seasons were exorbitant. And although the rural western Maryland location provided stunning views of the nearby forests and farmlands, it also left the house vulnerable to power outages due to falling trees. Notes knew that in order to keep the dream alive, something needed to be done.

Unfortunately, at the time Notes did not know what that “something” was. He correlated the high bills in the winter and summer with the discomfort he felt throughout the house. But that just left him with more questions. Did he need a newer or higher-capacity HVAC system? Should he add more insulation to his attic or crawl space? Could it be something else entirely? 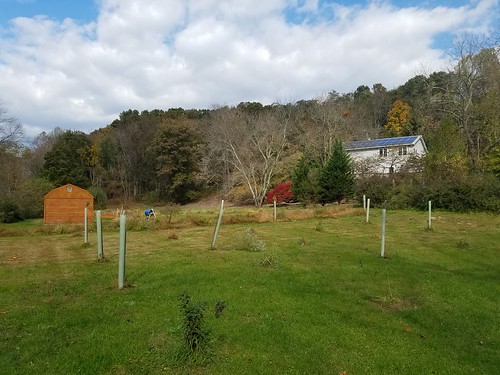 The Notes' backyard sustainable organic garden, with the solar array visible on the roof. 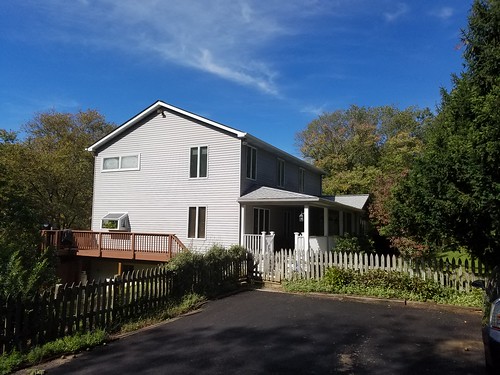 The Notes home in Marriottsville, Maryland.

It Must Be the HVAC

With no guidance, he did what many homeowners do in this situation: He went with his gut instinct. The HVAC systems were older, after all, so replacing them had to solve the problems plaguing the house. A year and two system replacements later, Notes found out the hard way that his gut instinct was incorrect.

So what now? Thousands of dollars had already been spent, and the only thing he had learned was that the HVAC systems were not to blame for his discomfort and his high utility bills. He figured adding insulation was the next logical step, but was hesitant to go climbing through the attic or crawl space. Even if he wanted to, what would that tell him? He had little experience in construction and even less experience in efficient building practice.

Ron Notes’s story is all too familiar. As an energy auditor, I have encountered dozens of people who have tried to solve their home performance problems with nothing to show for it except more gray hairs on their head and less money in their pockets. But luckily for those dozens of people—and thousands of others—the frustration Notes felt rubbed off on his son, Josh. 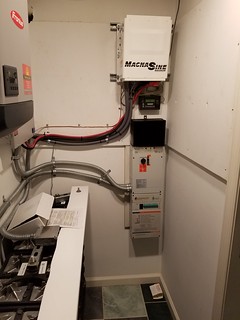 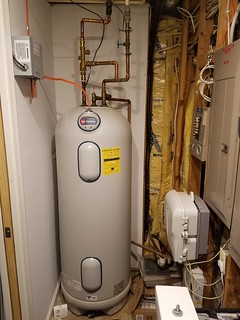 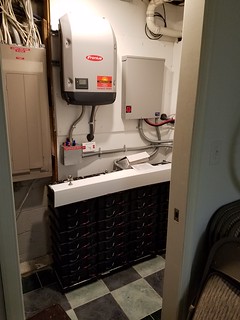 The control center for the microgrid gives the Notes’ the ability to separate themselves from the grid and operate critical systems in the house using energy stored in the salt water batteries.

Around 2007, as his father was struggling with the problems surrounding his house, Josh began to take interest in energy efficiency, particularly in residential spaces. The younger Notes recalls driving through the city of Baltimore, and with each dilapidated row house he passed, he saw enormous potential. Each property had an intrinsic value that could be realized only if the house was operating as efficiently as possible.

Josh enlisted two childhood friends, Jason Jannati and Matej Harangozo, and together they committed themselves to that ideal. They knew that by investing in energy-efficient practice, they could renew residential properties and unlock the inherent value that existed in every home. This focus on green renewal became the inspiration for the new company’s name: greeNEWit. The first project? Figuring out what was going on in the Noteses’ family home once and for all and finally ending the nightmare of discomfort and inefficiency.

The findings from that initial energy audit were surprising, but also enlightening. Disconnected ductwork, insufficient insulation, and inadequate air sealing were the most glaring problems. Frustratingly, each issue had been conveniently overlooked by the HVAC professionals who had installed new systems to the Noteses’ home in recent years.

This story is not meant to disparage the many reputable contractors that do excellent work throughout the country. Rather, it serves to highlight the unfortunate reality that some building contractors will ignore relevant home performance factors in order to push their specific product. In the Noteses’ home, switching out the HVAC systems may indeed have been warranted, but that solution was far from comprehensive. If the installers had fully diagnosed the problem from the beginning, it would have been apparent that system replacement was just a piece of the energy efficiency puzzle.

Such an oversight shifted greeNEWit’s interest in sustainability from strictly business to very personal. The three founders now knew firsthand the feeling shared by countless homeowners who had devoted time and resources to their homes without any positive results. With that understanding, Josh, Jason, and Matej resolved to treat every customer like family. Instead of advocating a single product or service, greeNEWit would focus on accurate problem diagnosis and comprehensive, customized solutions.

For his father’s house, the solutions were wide ranging. Ductwork was reconnected, insulation was added to the attic and crawl, and air sealing was implemented throughout. This allowed the new HVAC systems to operate as intended, instead of struggling against deficient ducts or leaks in the building shell. The comfort immediately improved both upstairs and downstairs, and the utility bills plummeted.

But that was just the beginning of the Noteses’ journey to sustainability. With his newly efficient house, father Ron was able to accrue enough savings to have solar panels installed on his roof. What had been a wasteful uncomfortable country cottage had been transformed into an efficient, sustainable, comfortable dwelling in less than a decade.

Yet with every silver lining comes a touch of gray. And while Ron Notes had transformed the house he lived in, he could not transform the environment around it. Beautiful as it was, the Maryland countryside came with some drawbacks. Thunderstorms would cause the towering maples to sway perilously close to nearby power lines, and snowstorms would make the rural roads leading to the house virtually impossible to navigate. After investing so much, Notes felt obligated to protect the house that he and his son) had spent years trying to fix.

Aware of the threats facing his rejuvenated home, Notes set out to safeguard that which he had spent so much to restore. And while it is impossible to prevent downed power lines and heavy snows, it is possible to protect oneself when they occur. Doing so requires the ability to provide reliable energy to a house when escape is not an option (e.g., during a blizzard) and normal grid operation has been disrupted (e.g., during power outages). Understanding these necessities, and equipped with greeNEWit’s expertise, Ron Notes began the second project on his home—a project that may once again prove to be transformative. He installed a microgrid.

A microgrid can be loosely defined as a local energy grid with control capability, which means it can disconnect from the traditional grid and operate autonomously. The key is the autonomous operation that allows homes with a microgrid to maintain electricity even when the power is out. In the Noteses’ home, salt water batteries tied to the solar panels store energy that can either be sent to the grid, or in times of need, be used to supply power to the house and its systems. So if a storm knocks out electricity to the Noteses’ neighborhood (or the entire Eastern Seaboard, for that matter), Ron and his family won’t be left in the dark.

Taking recent history into account, the need for microgrid installations like Ron’s may be growing more urgent as the data suggest that weather is becoming more extreme. With every cataclysmic weather event comes the possibility of grid disruption, affecting not only residential spaces, but hospitals, government offices, and military complexes as well. In this way, microgrids become much more than measures of convenience; they can literally mean the difference between life and death.

The Noteses’ microgrid is still in its infancy, but it serves as a crucial step in the long journey toward resilient sustainability. From the very beginning, greeNEWit has striven to facilitate this journey for people like Ron Notes who have the motivation to solve their energy problems, but lack the guidance or resources to do so.

Seth Fawcett is the home performance project manager at greeNEWit.