BY DANNY PARKER and KAREN SUTHERLAND
WEB ONLY

Smart thermostats (sometime called “connected thermostats”) regulate the home temperature by self-programming, using heuristic evaluation of user habits and occupancy. The Phased Deep Retrofit (PDR) project, conducted by the Florida Solar Energy Center from 2012 – 2015, was designed to evaluate shallow and deeper retrofit in a large sample of intensively metered homes. In the second phase of this project, 25 Nest thermostats and 2 Lyric thermostats were installed in participating homes. A full year of sub-metered hourly temperature and heating-and-cooling system energy data was available prior to the installation of Nest thermostats, allowing detailed evaluation of interior temperature-related changes as well as energy related savings. Overall measured heating-and-cooling energy savings averaged 9.5% or about 500 kWh a year.

Smart thermostats are devices that control the home heating and cooling system. They are typically connected to the internet using a combination of data on occupancy, weather, and thermostat-setting preference to help consumers with automated setback and setup schedules. Some devices, such as the Nest thermostat, can automatically learn when the house is likely to be occupied allowing for temperature set-back or set-up to optimize energy savings and comfort. 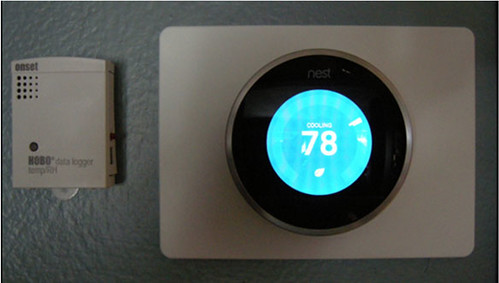 The Nest learning thermostat at a PDR site next to a portable logger recording temperature and relative humidity.

The PDR project installed a series of energy efficiency improvements in 56 Florida homes over a three-year period to estimate the individual and combined impacts of various technologies on measured electricity use in occupied homes. Study sites for Nest smart thermostats were chosen based on homeowner preference, and acceptance of the devices. We experienced difficultly with consumer acceptance of the Lyric devices and the remainder of this article is confined to the evaluation of the Nest thermostats.

In conducting the analysis, we carefully minimized confounding influences by eliminating sites with factors that would bias results. The evaluation time periods for three sites were limited to 18-month periods because the air-conditioning equipment on those sites was changed out. Such changes very visible within the submetered data. Also, a subset of three Nests were installed in 2015 in homes with supplemental mini-split heat pumps operating and were not considered part of the main sample.

The preretrofit evaluation periods ran from July 2013 through the installation date at each site, and the postretrofit periods ran from the installation date at each site through December 2015. No specific instruction or programming was provided to occupants, who were free to alter the thermostats as they pleased and to use the information provided by the thermostat manufacturers. For each home, a full one to two years of preinstallation data were available, including condenser and air handler power as well as indoor temperatures and relative humidity. This aspect of the study is unique, since most monitored data on connected thermostats include only the detailed temperature data after the changeout. In our case, we had both long pre and post period data. Within our evaluation, the plotted long-term data revealed an outdoor temperature balance point between heating and cooling for each building.

In evaluating the smart thermostat sites, often with two years of data before installation, we were careful to look for changes to the air-conditioning system over the pre- or postretrofit period. Specifically, we looked for cases where the air-conditioning equipment was replaced, since replacements could severely bias the results. However, in doing the evaluation with regression models tied to outdoor weather, we found that performance of the cooling system at many sites seemed to be worse in the year before the Nest was installed than it was two years before installation.

Although a systematic evaluation is needed to confirm this theory, our evaluation suggests that cooling-related air-conditioning performance falls an average of 1–4% per year. Therefore we limited preretrofit evaluation periods to one year to avoid the introduction of additional bias. Degradation of cooling performance may be caused by many factors—fouling of indoor and outdoor coils, failure to change filters, loss of refrigerant charge, and so on—but for whatever reason, the data suggest that the phenomenon is real. We further found that mechanical cooling system performance degradation over time can be measured by tracking system response to weather-related influences. Figure 1 shows apparent degradation at Site 22 for the full cooling seasons in the years 2013 and 2014. 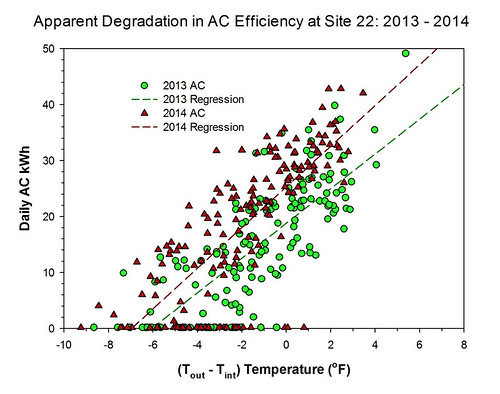 Figure 1. Change in cooling performance seen at Site 22 from 2013–2014 plotted against outdoor to indoor temperature difference. The indoor and outdoor units of this system were manufactured in 2001.

We saw this not only at Site 22 but at most of the sites where cooling degradation could be examined. There was a trend of increasing consumption from one year to the next, even controlling for weather and interior temperature preferences. Accordingly, we decided to use one year of pre data and one year of post data, no matter how many years of data were available.

We evaluated a total of 22 Nest sites. The data for the two Lyrics, and for the three Nests installed after supplemental mini-split heat pumps were added, cannot be accurately evaluated within the experimental sequence used in this study. These five sites are excluded from the following summary.

The average savings for cooling (2.1 kWh per day at an outdoor daily temperature of 80°F) was 9.3%, but with a very high degree of variation. Indeed, the analysis showed that 7 out of 22 sites experienced negative savings. This appeared to be an artifact of the occupants’ preretrofit thermostat habits. These 7 sites included homes where the existing programmable thermostat was properly set up (a distinct minority) and homes with manual controls that had been aggressively managed. In an aggregate distribution, for the sites that had positive savings, those savings were greater than the negative savings for the homes that had negative savings. Not surprisingly, analysis of pre- and postretrofit interior temperatures versus outdoor temperatures found that sites without savings often maintained lower indoor temperatures in the postretrofit period.

To compute the Nest savings, the regressions developed in the foregoing analysis for each site were applied to the weather data from the typical meteorological year (TMY3) observations for the identified representative Florida locations. The results were then weighted by utility customer weights for those regions to estimate a final savings for Nest- related cooling and heating in the overall PDR sample.

The results indicate an average 9.6% or 498 kWh per year cooling energy savings, although median savings were somewhat lower. There were large differences between mean (18.5%) and median (9.5%) heating energy savings. However, the absolute savings numbers are quite small, given Florida’s limited heating season (39 and 35 kWh per year for mean and median, respectively).

Given the large level of absolute cooling in Florida (~5,500 kWh/year for single family occupancy), total monetary savings would be about $60 per year, at $0.12/kWh. Simple payback for the Nest installation in this example would be about four year, with an annual rate of return of 24%—excellent for a low-cost retrofit measure. In light of these results, we would advocate installing smart thermostats as part of the simple but effective utility retrofit measures.

Nest evaluations in other parts of the United States, albeit with lower levels of cooling intensity, showed annual air conditioning savings of 11–15%. The 9.6% savings that we found in this study of Florida single-family homes is somewhat lower. We speculate that there may be multiple reasons for this difference:

That said, attached homes and rental homes in Florida have much higher vacancy rates (13.2%) than other single-family homes (3.8%). This is at least partly due to older Florida residents who migrate seasonally—the so-called snowbirds. These residents inflate the winter population by nearly 800,000 people, or about 4%, but are largely gone during the air-conditioning-intensive summer season. Snowbirds may experience higher savings levels from smart thermostats, though the evaluation did not address this point. In the single-family analysis, the data showed that the Nest thermostat achieved the greatest savings during the vacant period. See an example in Figure 2.

Download the full study described in this article, including references to previous studies and more details about the methodology we used. 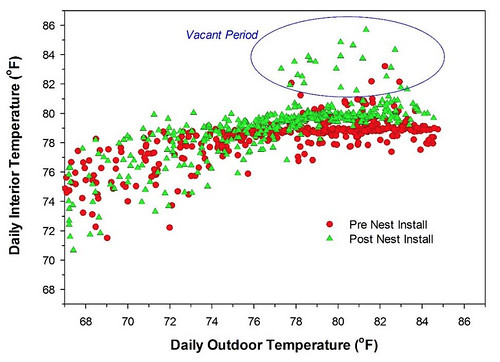 Finally, it is important to note that Florida Power & Light Company recently reported on its own internal evaluation of the smart thermostats in a separate monitoring project. The results showed estimated annual cooling energy savings of 450 kWh per year, which would be considered statistically indistinguishable from the results shown here.

Danny Parker and Karen Sutherland are researchers at the Florida Solar Energy Center. Dave Chasar, a researcher at FSEC, also contributed to this article.