Effective Strategies for Dealing with Ducts in Unconditioned Spaces

A version of this article appears in the May/June 2014 issue of Home Energy Magazine.
SHARE
Click here to read more articles about HVAC 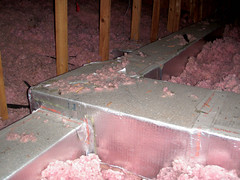 Figure 2. Categorization of buried duct insulation levels in dry climates (above) and humid climates (below). 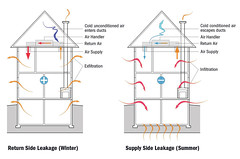 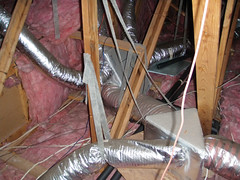 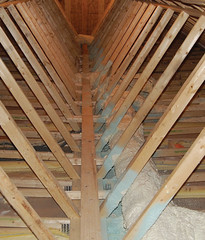 Encapsulated duct before it was buried in insulation. (SWA) 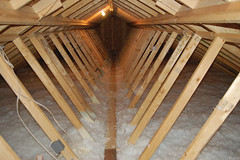 Encapsulated duct after it was
buried in insulation. (SWA)

There are three primary methods to reduce thermal losses associated with ductwork in unconditioned spaces. These methods have various cost, performance, safety, and practical trade-offs that must be considered before implementation, but each can greatly improve heating and cooling system efficiencies.

The building industry has struggled to address ductwork thermal losses in new and existing homes. As building codes strengthen requirements for duct air sealing and insulation, additional compliance options are needed to address energy efficiency goals. (See “Code-Compliant Tried-and-True Solutions.”) While ductwork within the thermal envelope has been promoted as the ultimate solution for addressing ductwork thermal losses, the BEDs approach can meet—and sometimes exceed—the performance of ductwork located within the thermal envelope.

The Consortium for Advanced Residential Buildings (CARB), a research team led by SWA and sponsored by DOE’s Building America program, has conducted significant research on this topic and has written several reports, including Measure Guideline: Buried and/or Encapsulated Ducts (Shapiro, Zoeller, and Mantha, 2013), which covers the technical aspects of BEDs as well as the advantages, disadvantages, and risks of BEDs compared to alternative strategies. This report synthesizes previously published research on BEDs and provides practical information to builders, contractors, homeowners, policy analysts, building professionals, and building scientists on how to install BEDs.

Conventional HVAC design manuals dictate that space-conditioning air in cooling-dominated climates be discharged from ceiling or high-wall registers (ACCA 1992). As a result, most houses in hot climates with ducted space-conditioning systems have ductwork, and in some cases air-handling units, in unconditioned attics. Energy losses from duct leakage to the outside can range from 3% to much more than 20%. These losses are exacerbated by large temperature differentials between the conditioned air inside the duct and the air in the unconditioned attic. During the cooling season, 55°F conditioned supply air can be separated from 140°F ambient attic air by duct insulation with a rated thermal resistance as low as R-4.2. During the heating season, this temperature differential can be even higher, with 110°F conditioned supply air passing through attics with 20°F ambient attic air.

The BEDs approach can provide simple and cost-effective methods for reducing thermal losses from ductwork installed in unconditioned attics. There are three possible combinations under this approach: (1) buried ducts, (2) encapsulated ducts (with ccSPF), and (3) buried-and-encapsulated ducts. The best solution depends on the climate, the age of the house, and the configuration of the HVAC system and attic. The buried-duct approach is acceptable in dry climates only. Ducts that are encapsulated without burial are not recommended for new construction, because additional burial requires only minor increases in planning and cost over encapsulation alone. Thus buried-and-encapsulated ducts yield significantly higher performance with minimal additional effort. In moist and marine climates, ducts must be encapsulated prior to burial in loose-fill insulation to avoid the risk of condensation forming on the surface of the ductwork.

The three most common duct materials are sheet metal, fiberglass duct board, and flexible duct. A duct distribution system may use a combination of these materials, such as sheet-metal trunks off the air handler and flex duct branches to supply the individual registers.

Flexible duct. Flex duct is relatively inexpensive and comes preinsulated. It is composed of three materials: (1) an interior polymer tube with diameters ranging from 4 inches to 24 inches, supported by a spiral metal coil; (2) fiberglass insulation with thicknesses ranging from 1 inch to 3 inches; and (3) an outer polymer liner, which usually incorporates a low-e foil facing that provides a radiant and vapor barrier. Flex duct can be run long distances—with several bends and turns—without additional fittings or connections. However, this practice can create a higher flow resistance than the other two, especially if the flex duct is not installed taut, as per manufacturer’s instructions. With fewer transitions and fittings, flex duct can be very airtight, but as with other duct materials, leakage can still occur at connections.

Fiberglass duct board. Duct board is a rigid, dense, fiberglass sheet product that typically comes with a fiber-reinforced foil facing that acts as a vapor barrier. Duct board is usually sold in large sheets (e.g., 4 feet × 10 feet) in thicknesses ranging from 0.75 inch to 2 inches. The fiberglass provides thermal insulation and sound attenuation.

Duct board is typically cut, folded, and shaped in the field into rectangular sections of duct, plenums, trunks, and junction boxes. Smaller branch ducts can be sheet metal or, more commonly, insulated flex duct. The most common areas for leakage are at the collars, transitions, and connections to other materials.

Sheet metal. Galvanized steel metal is a widely used duct material and is required in some jurisdictions. Round and rectangular shapes are the most common, but ovals and other shapes are sometimes used. There is also a wide array of sheet-metal fittings that connect sections of duct, such as elbows, transitions, takeoffs, and reducers.

Screws are typically used to connect straight round ducts to collars, elbows, Ts, Ys, reductions, boots, and other fittings. The Sheet Metal and Air Conditioning Contractors National Association recommends using at least three #8 sheet-metal screws spaced equidistant (SMACNA 1998). If seams, gaps, and connections are not sealed before insulation, substantial leakage can result. Ducts should be sealed at all junctures with mastic, fiber mesh tape-reinforced mastic, or UL-181-approved metal tape.

The encapsulated-only approach involves spraying ductwork with closed-cell spray polyurethane foam (ccSPF) to boost the R-value of the duct insulation and reduce air leakage. Although ccSPF may be applied directly to the exterior of uninsulated ductwork, insulating the ductwork with fiberglass duct wrap prior to encapsulation is a less expensive way to increase R-value. Ducts should be sealed to reasonable tightness, and the ccSPF will act as an additional air barrier. In order to be code compliant, the ccSPF used must be approved for exposed attic installations.

BEDs have been the subject of building science research for more than a decade, particularly through the Building America program. As a result of Building America research, BEDs have been incorporated into several energy conservation codes and standards. For example, buried ducts are compliant, when properly installed, with Title 24 of the California Code of Regulations (CEC 2007, 2008), which governs construction of buildings throughout the state of California and stipulates minimum energy conservation levels (CBSC 2010). The 2009 International Residential Code (IRC) prescriptively allows spray foam-encapsulated ducts. As an alternative to interior duct installations, DOE’s Challenge Home National Program Requirements allows ductwork in attics that is (1) encapsulated with at least 1.5 inch of ccSPF and (2) buried under a minimum of 2 inches of loose-fill insulation (DOE 2012).

While there are no significant obstacles to ensuring that buried duct installations are code compliant, installations involving ccSPF must be carefully considered. In general, the 2009 IRC requires that spray foam insulation applied to the exterior of ductwork (Sections M1601.3 and M1601.4) in attics (Section R316.5.3) meet several requirements:

The 2009 IRC allows exposed installations of ccSPF in attics, but the spray foam used must be specifically approved for installation without an ignition barrier (Section R316.6). Approval is determined on the basis of specific fire-related test procedures. Not all ccSPF materials meet the requirements of Section R316.6.

If the spray foam used is not approved for exposed attic installations, encapsulated ducts must also be buried in loose-fill insulation such that an ignition barrier covers the ccSPF. For BEDs, 1.5 inch of fiberglass, which is considered mineral fiber insulation (ASTM C554-11), meets the minimum requirements for ignition barriers. BEDs using a ccSPF material specifically approved under Section R316.6 may be buried under cellulose. All other BED installations require 1.5 inch of fiberglass or mineral wool insulation coverage.

The energy savings associated with BEDs depend heavily on the space-conditioning system installed in the house. Counter intuitively, BEDs may reduce space-conditioning energy use by a larger percentage when a multispeed or right-sized A/C system is installed. These systems operate at lower capacities for longer periods of time than conventional systems, and thermal losses from ductwork therefore account for a larger percentage of the total load. For example, a recent study found that switching from an attic duct system to an indoor duct system reduced cooling energy use by 17.3% for a multispeed 21-SEER system, but reduced cooling energy use by only 11.2% for a single-speed 13-SEER system. The experiment was conducted by alternating the use of these systems in a 1,600 ft2 laboratory test house in Florida.

Ducts installed in unconditioned attics can also cause comfort problems for the occupants. When the space-conditioning system is not running, the air inside the ductwork can be heated or cooled substantially, depending on the season. When the system begins operation, this hot or cold air is pushed into the conditioned space, increasing the space-conditioning load and causing comfort problems for the occupants. By increasing the R-value of the ductwork and reducing air losses, BEDs can dramatically reduce these effects.

Furthermore, leakage from the duct system can depressurize or pressurize the conditioned space. This increases envelope air infiltration, which in turn may cause moisture problems. Return-side leakage in the attic can create positive pressure in the home and result in unconditioned air and pollutants being pulled into the airstream (see Figure 3, p. 21). Positive pressure can cause moisture problems during winter months in cold climates if relatively moist interior air is pushed into the wall assembly and condenses. Similarly, attic supply-side leakage can create negative pressure in the home and result in conditioned air being lost to the outdoors. If there are atmospheric combustion appliances in the home, negative pressures can interfere with proper drafting, which can cause exhaust gases to build up within the home. In hot-humid climates, depressurization can also lead to high indoor relative humidity levels as outdoor air infiltration is exacerbated. Encapsulating ducts can reduce leakage; in addition to saving substantial energy, lower duct leakage can alleviate moisture, comfort, and safety problems.

While each combination of building construction, ductwork installation, and space-conditioning system poses unique challenges to reducing ductwork thermal losses, there is fortunately a wide array of solutions that may meet the challenges posed by each building.

This article was adapted from a DOE Building America program report.