A version of this article appears in the May/June 2015 issue of Home Energy Magazine.
SHARE
Click here to read more articles about Renewable Energy

We live in the most extraordinary of times, with unprecedented access to ideas, people, and stuff. This new flood of resources, as I see it, springs from a convergence of several factors: new communication tools, a more open sharing of information by governments, widespread wealth, and a mixing of social strata, among other influences. And though we could discuss this evolution on several levels, this article addresses the sharing of information on the business and technology of high-performance construction as it’s being developed on both sides of the Atlantic.

The 2014 International Energy Efficiency Scorecard, produced by the American Council for an Energy-Efficient Economy (ACEEE), rates the overall efficiency practices of 16 of the world’s largest economies in each of four categories: National Efforts, Industry, Transportation, and Buildings. (See Figure 1, p. 26.) When it comes to buildings, North Americans could learn a few things from their international counterparts: out of a possible total score of 25 for buildings, the U.S. receives a score of only 13, with Canada scarcely higher at 15. It’s a disappointing showing for two countries that have often been known for innovation in building science and practical application.

The good news is that the achievements needed to meet the benchmarks set by ACEEE are completely achievable. In ACEEE's words, “The conditions required for a perfect score are currently achievable and in practice somewhere on the globe. For every metric, at least one country (and often several) received full points.” 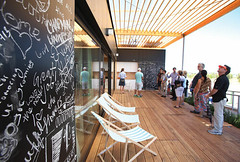 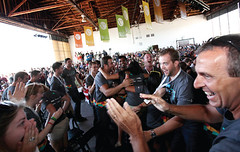 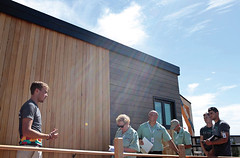 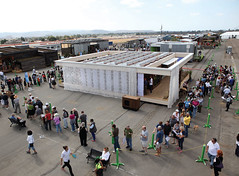 Visitors line up to tour the Team Austria house, built by students from Vienna University of Technology, after it came in first place overall at the U.S. Department of Energy Solar Decathlon. (Stefano Paltera)

I think that everyone involved with the various sectors of the construction industry would benefit from better communication among the parallel channels of commerce, technology, and science. With modern communications, there is no point in re-inventing the wheel, and during those few points in history when we do need to invent something, the process goes a lot faster if we have the help of knowledgeable collaborators everywhere.

We can all benefit from the sharing of knowledge across the construction industries and among countries. Like children sent away on a foreign exchange program, our ideas are often much richer when they return home. What do we gain from this type of exchange?

International cooperation is not a new concept. But the difference, at this point in history, is that we now have the means and motivation to build powerful new collaborations among individuals and small organizations, giving us the potential to bypass the big, slow-moving entities that have usually been our international emissaries. There are plenty of times when this has happened recently, and several areas where it’s about to happen in the housing industry.

History tells us that we often develop technologies in North America and Europe on parallel but separate paths. In most cases, someone eventually looks at the work performed by their international colleagues and decides that it’s worth sharing, borrowing, or stealing. We have plenty of examples of this cross-pollination among separate-but-related technical camps.

The current housing industry is ripe for such international collaboration. I think that individuals and organizations that learn how to identify and leverage specific market blind spots will gain advantages over their stay-at-home competitors. Though it may seem daunting to embark upon the industry-shifting initiatives outlined here, there are immediate and simple opportunities embedded within each one that any of us can implement right away.

How to Build Your Own Professional Bridges

Each of these challenges will require the involvement of committed individuals who understand the power of modern collaborative tools. I offer here some ideas to help you expand your ability to work with others.

Contact the author by e-mail or on the web.

Start your own language exchange.

Translate text to a foreign language.

Read and download the 2014 ACEEE International Energy Efficiency Scorecard (the source of the information included in Table 1).

We’re all part of the new globalization, whether we actively choose to participate or not. I view this flow of ideas, materials, and people as simply another stream of raw materials to be utilized to great advantage for everyone. For each of us, it’ll take some time to learn how to work with these global resources, to sort the wheat from the chaff, and to integrate the new knowledge into our organizations. But the opportunity is huge, and the future will include big options for those who learn how to reach out, connect with allied professionals in smart and responsive ways, and manage this new flood of opportunity.