BY JEFF FARLOW
WEB ONLY

This online-only article is a supplement to the May/June 2016 print edition of Home Energy Magazine.
SHARE
Click here to read more articles about Water

One of the first homes Mike McFarland evaluated was his own. McFarland, owner of Energy Docs Home Performance in Redding, California, was curious about why his energy use spiked in December and January. It didn’t take long to discover his pool pump’s freeze protection mode. He had a ¾ hp pump that would kick on for 12–14 hours per day, drawing 3 kW, whenever the air temperature dropped.

The first change he made was to adjust the pump’s timer settings. Then he upgraded to a variable-speed pump, which pulls 120 watts for 16–18 hours, meeting the freeze protection need while using far less energy.

In homes with pools, the pool pump is one of the three things that consume the most power; the other two are the home’s water heater and HVAC.

In 2008, the Natural Resources Defense Council (NRDC) reported that the then 4.5 million inground residential pools in the United States consumed between $1.1 and $1.6 billion in energy costs per year. In 2013 EPA added pool pumps to the list of products that can receive certification from Energy Star. And EPA soon after published a specification describing how pool pumps should respond to the utility’s demand response signals in smart-grid situations.

Further, DOE has taken steps toward federally regulating minimum-efficiency requirements for pool pumps. While the voluntary Energy Star standard recognizes the most efficient products available, and has been a good tool for increasing awareness that not all pool pumps are created equal, a minimum-efficiency regulation will make it illegal to sell or import products below a specified minimum efficiency. 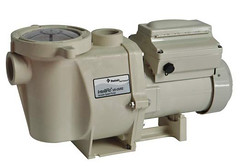 Older pool pumps typically draw about 1,500–2,500 watts. If the pump runs only 4½–6 hours each day, that can add up to 10.5 kWh per day, or about 3,800 kWh per year. If the pump runs all day, as is common practice in many parts of the country, those numbers are significantly higher.

Many pools also have cleaners with booster pumps that can add another 1,200–1,500 watts. If the cleaner runs about 3½ hours per day, the total combined consumption for these two pumps could exceed 5,300 kWh per year. Rates differ around the country, but if electricity costs 12¢/kWh, those 5,300 kWh would cost more than $600 per year. Loads like that can have a dramatic impact on both the electrical grid and the pool owner’s wallet. n addition, pools typically run during electric utility peak-load times, further straining the electrical grid.

If a pool uses a single-speed pump, it may cost $900 per year to run that pump. (Numbers will vary by region.) After five years, the owners will have spent $4,500 running that pump. Meanwhile, if you have a well-designed system with a variable-speed pump, the comparable operational costs may be as little as $200 per year. In that scenario, at the end of five years, the owners will have spent about $1,000 running the pump, less than one-quarter what they would have spent had they continued running the single-speed pump. Further, the cost savings continue to multiply throughout the lifetime of the newer pump. More importantly, the initial cost of the variable-speed pump will be recouped in year two.

Let’s say a variable-speed pump costs $300–500 more than a new single-speed pump. (Again, actual numbers will vary by region, but this is a good estimate.) Your customer may be deciding between a $600 pump and a $1,000 pump. But the cost to operate the less-expensive pump may be more than quadruple the cost to operate the more-expensive pump. In this scenario, the pool owner will see the return on the investment in year one.

The amount of energy that can be saved depends on how often the pump runs; what it is used for (water features, circulation, running a pool cleaner, and so on); and the overall hydraulic design of the pool.

“Going to a variable-speed pump and programming it correctly gives homeowners one of the better paybacks of all the things we can do,” says McFarland, adding that the payback is most dramatic for customers used to paying higher rates in tiered-rate areas.

Regional variations in pool pump use patterns are less significant than one might think. That is, there’s just as much opportunity for savings in New England and the Midwest as there is in warmer climates. That’s because in the shorter swim season regions, equipment typically runs 24/7. Four months of that will use as much energy as running a pump only eight hours a day year-round, which is common practice in warmer climates.

It’s also important to note that, particularly in cooler climates, pool use tends to coincide with seasonal A/C. And in my experience, people are quicker to associate summer energy bill increases with A/C than with pool pumps.

Upgrading to an energy-efficient pump can translate to a reduction of 20% or more of a homeowner’s total monthly electric bill.

Spencer Rosen, CEO and president of Energy Integrity in San Diego, California, recalls a home in Carlsbad that had a top-of-the-line variable-speed pump, yet the owner was paying $550 per month in energy bills. The pump was running at full speed for 6 hours per day. Rosen’s evaluation and explanation of the affinity law (which states that cutting a motor’s speed in half reduces energy demand to one-eighth) led to running the pump at one-third speed for 14 hours a day. “That single change saved $250 on their monthly bill,” he says.

Historically, pool pumps with induction motors that run at only one or two speeds have drawn far more energy than is required to do the pump’s primary job, which is to circulate pool water through the filter (and heater, if applicable). If a pump can run at only one speed, that speed must be powerful enough to do the pump’s most demanding job (for example, vacuuming the pool or backwashing a filter). However, it takes far less power simply to circulate water for filtration, a difference single-speed pumps cannot address.

Most variable-speed pumps can be programmed to operate at set speeds to deliver the correct flow for each task they perform, such as operating waterfalls, spa jets, or a suction side pool vacuum. Some pumps have built-in constant-flow software, which maximizes the advantages of variable-speed technology; constant-flow pumps automatically adjust their speed and deliver the required flow for each programmed task.

Another important distinction among variable-speed pumps is the motor type. Totally enclosed fan-cooled (TEFC) motors enhance performance, efficiency, and reliability. As the term TEFC suggests, these motors are completely enclosed, with no openings for dust, insects, or moisture—enemies of other motor types—to get in. The built-in fan on TEFC motors keeps them running cool, which greatly improves durability and efficiency. They also run very quietly and reduce wear not only on the pump itself but also on filters, heaters, chlorinators, and other equipment.

No matter what kind of pump is being used, slower pump speeds save energy. A variable-speed pump running at a low speed will draw between 120 and 400 watts and consume about 2 kWh per day. By comparison, a single-speed (high-only) pool pump consumes around 10–12 kWh per day. A variable-speed pump uses very little energy for low-speed/low-flow tasks like filtration. Therefore, it is possible, depending on energy rates, to spend 10¢ filtering a particular amount of water, while it would cost a full dollar to filter the same amount of water with a standard pump.

It’s no wonder, then, that pool pumps have been added to the Standard for Home Performance-Related Data Transfer (HPXML) database at the heart of many home performance software packages. Much effort has gone into refining the savings predictions of the various home performance software packages. The HPXML database provides a standardized set of fields that make data transfer easier. Now that pool pumps are included in this standardized database, many software developers are quickly adding pool pump savings capability to their offerings, so pool pump savings can be reported seamlessly among a home’s other energy-saving opportunities.

The NRDC lists the following steps toward reducing the energy consumption of a swimming pool, in order of importance:

Here are some other ways you can add an energy-efficient and effective pool pump to your list of efficiency upgrades:

Automation. Digital automation systems do for pools what programmable home thermostats do inside. You can schedule cleaning and filtration cycles so equipment will not be left on inadvertently or run at a higher flow rate than necessary. You can take advantage of off-peak or seasonal utility rates. Some systems track usage history and inform you of ways to reduce energy consumption. Plus, with some systems, home owners and service professionals can monitor and adjust equipment settings from their laptops, tablets, phones, in-home remote controls, special LCD touch screens, and so on.

Heaters. Gas pool heaters must meet the 82% minimum-energy requirement established by DOE, and some building codes also prohibit continuously burning pilot lights. Heat pumps, geothermal heat exchangers, and solar-heating systems are also environmentally friendly heating options. Research the options thoroughly before you recommend solar heating. This can be a very attractive option, because heat from the sun is free. However, it is important to consider the additional cost of running a pump to operate the solar-heating system. Combining gas (the most effective heater type for quick temperature rises) with solar may reduce a pool’s overall energy consumption.

Covers. Pool covers are critical for conserving heat and water that is lost through evaporation. Evaporation accounts for 70% of a pool’s heat loss, and a simple vapor barrier will eliminate that loss. have A smaller percentage of heat is lost through convective transfer at the pool’s surface, so an insulating cover helps only slightly.

Rules and rebates. Another compelling reason to upgrade to more-energy- efficient pool equipment comes in the form of rebates from utility companies. More of these are being offered all the time; over 90 are offered nationwide for pool pumps alone. Across the country, utilities have determined that offering upgrades to energy-efficient pool equipment is one of the best ways to achieve their energy conservation goals. Dollar amounts vary among utility companies, but many rebates help offset the higher cost of variable-speed pumps.

With all of these advantages, it’s easy to see why homeowners should consider a pool pump upgrade right along with their other home energy improvements.

Seeing the Possibilities with the Water-Energy Nexus

As building performance professionals, we see the world differently than most people. We see the interconnections between west-facing glass and occupant comfort, hidden airflow and insulation performance. Thanks to that ability to see things differently, ...

Thoughtful Design Is the Key to Reducing Home Water Use

Product selection and home design can have a dramatic impact on residential water use at minimal cost and effort. In California, for example, no matter what El Niño brings, water conservation will continue ...