Why Proof Will Be the New Normal // Part 3: Getting It All on Screen

This is part 3 of a series of articles on Corbett Lunsford and Grace McPhillips Lunsford’s PROOF is POSSIBLE tiny-house tour.

While the Lunsfords have engaged consumers directly on the PROOF is POSSIBLE tour, they’ve waged a parallel campaign to impress the virtues of building science on them through mass media with Home Diagnosis. But navigating the ephemeral world of reality television production has many pitfalls. From Property Brothers to Holmes on Homes, the couple are aware that they’re competing for entry to a crowded field driven by personality. The process of even getting producers to entertain a novel idea can be maddening.

“You get a network executive to want to see you as a couple on-screen because they think you're quirky or weird or otherwise compelling,” Corbett writes on his blog. “You work with a production company and pay out of your own pocket to shoot a 'sizzle reel' that shows off the personality of the hosts. You remind yourself and everyone else that your show is about SCIENCE, not about relationship drama and being quirky or weird. They remind you that no one cares about the topic in reality TV. You feel frustrated, and you throw the whole idea in the garbage because you don't want to play their stupid game.” 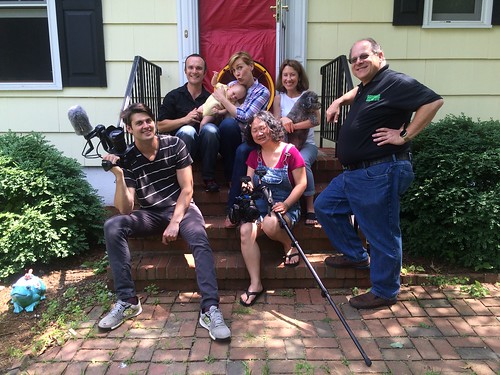 The cast and crew of Home Diagnosis takes a break from filming on location in Princeton, New Jersey with local contractor SG Heating and Air Conditioning, LLC. 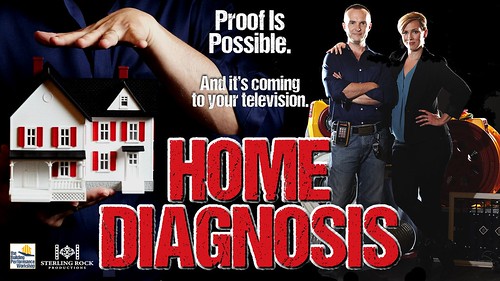 A promotional graphic for the show, which the Lunsfords describe as This Old House meets CSI.

Before conceiving Home Diagnosis, the Lunsfords pitched two similar programs to television networks. The first, Our Green Company, presented to the Discovery Green network in 2009, focused on the Green Dream Group, the couple’s energy-auditing firm. However, the network decided that the green fad was over and declined to pick the show up.

Still, the experience helped them to hone their niche. “We thought we were doing sustainability consulting, and then we thought we were doing energy auditing,” Corbett says. “Then after a little while we realized . . . audit is a bad word and energy is not really what most people care about, so we figured out that what our clients really wanted us to do is to solve problems in their homes.”

After rebranding themselves as the Building Performance Workshop, they pitched Prescription Home Performance to the networks in 2014. At a reality television producers’ conference that year, the Lunsfords entered into talks with the Science Channel. That conversation escalated to senior executives, who liked the concept, but ultimately decided that they didn’t want to compete for home improvement viewers with HGTV.

Rather than solicit a third round of television networks for Home Diagnosis, the Lunsfords went around them altogether this time, appealing directly to the industry they sought to represent. The response from contributors, including BPI, revealed a strong demand to see home performance done justice on-screen, and they were able to raise the cash for an independent six-episode run.

Corbett acknowledges that his ardent self-promotion has drawn skepticism from some quarters of the building science community, which is understandably wary of hype. But he insists that he and Grace felt a duty to galvanize a movement that needed a champion. Their primary goal is not to cultivate and defend a proprietary brand—another stance that put them at odds with profit-driven television networks—but to nudge more home improvement shows to incorporate diagnostic testing, and, in turn, encourage their viewers to demand scientific proof of quality from their own local contractors.

“In my dream world, every contractor tests something,” Corbett says. “So the more copycats, the better.”

The sentiment echoes the altruism of the open-source movement, the worldwide network of engineers that cooperatively creates free high-quality software, and Tesla CEO Elon Musk, who invoked the same philosophy when he released the automaker’s patents to the public in 2014, describing them as “intellectual property land mines” that unnecessarily inhibit peers working in good faith toward common goals in sustainability.

Bent on accelerating the advent of sustainable homes, Corbett explains why Home Diagnosis had to be different from other shows.

“Any network that bought this would want for us to say at every turn, ‘We are the world experts’ so you tune into our show,” he says. “Our goal was exactly the opposite. We wanted to show that there are contractors in your backyard all over the country who know how to test their work and can prove that they're doing superior work.”

Corbett and Grace have their work cut out for them. In a decade that has seen employment in the solar-energy sector surge to over 260,000 jobs, home performance enterprises have struggled to find similar traction. SolarCity ...