A version of this article appears in the Spring 2019 issue of Home Energy Magazine.
SHARE
Click here to read more articles about

Whiskey is for drinking, water is for fighting over.
—Mark Twain

When anything is very inexpensive and not at the forefront in our minds, it can go undervalued and be misunderstood. Water falls into this dark hole. It’s not that we are running out of water; we are not. The problem is that the water isn’t always where we need it. The United Nations Environment Program reports that 97.5% of all water on earth is saltwater and 2.5% is freshwater. Of the 2.5% of freshwater, 0.3% is in lakes and rivers, and 30.8% is groundwater, including soil moisture, swamp water, and permafrost. A robust 68.9% of the 2.5% is in glaciers and permanent snow cover.

Oh, don’t forget; some of that water is in you and your dog. Stephen Leahy says that a good way to visualize these numbers is that if the world’s water filled a 5-gallon water cooler bottle, the available freshwater would be equivalent to only 3 teaspoons of drinkable water (see Figure 1). 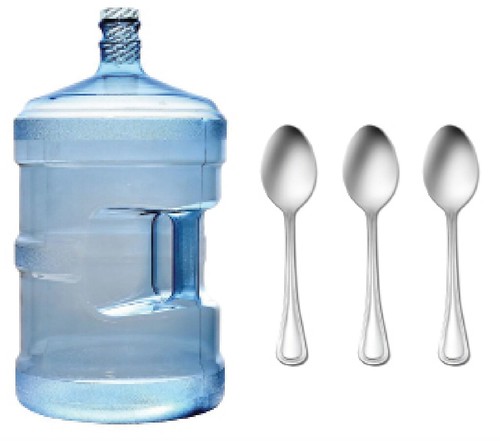 Figure 1. If the world’s water filled a 5-gallon water-cooler bottle, the available freshwater would be equivalent to only 3 teaspoons of drinkable water.

“If we’re starting with the wrong questions,” says Simon Sinek, “if we don’t understand the cause, then even the right answers will always steer us wrong . . . eventually. The truth, you see, is always revealed . . . eventually.” So let’s focus on just a few “whys” for what we do.

Freshwater resources are fundamental for maintaining human health, agricultural production, economic activity, and power production, as well as critical ecosystem functions. Population growth, urbanization, and climate change add new stress to our access to water. The availability—or unavailability—of water is illustrated in the nation’s drought footprint maps, published by the New York Times from 1899 to 2010. These maps plainly show that sooner or later, no matter where we live, drought will visit us. Benjamin Franklin was right in 1746 when he said, “When the well’s dry, we know the worth of water.”

It’s like the story of the frog in the pan of boiling water. When a negative change occurs slowly enough, we are not conscious of it and most of the time, it doesn’t trigger any reaction. This is exactly what is happening in much of our nation regarding running out of water.

Our withdrawal and use of water have increased dramatically over the last 50 years. The result of this increase has given us numerous reasons to reduce our water use. Following Simon Sinek’s lead, let’s start with why reducing water use is so important, and why what we do is more valuable than we may have thought. We in home performance need to add water efficiency to the valuable things we do. We often say that we do what we do in order to make homes healthy and safe, durable, comfortable, energy (and water) efficient, and environmentally responsible. I think it’s important to point out that we are helping to reduce water use by the work that we do.

The demand for water is humongous, the technical word for colossal. First, there’s irrigation—farming is the thirstiest user of our precious water supplies—but power production and other sectors are competing for our freshwater as well (see Figure 2).

Figure 2. Direct household water use (for bathing, laundry, washing cars, watering lawns, and so on) is way less than water use to produce household electricity.

There is a major difference between use and withdrawal. Water use is defined as use that permanently withdraws water from its source. This water is no longer available, because it has evaporated; been transpired by plants, incorporated into products or crops, or consumed by people or livestock; or has otherwise been removed from the immediate water environment. The steam that pours out of the cooling towers of thermal electric power plants is water that has been used. Agriculture accounts for 84% of water use. Water withdrawal is defined as diversion of water from surface water or a groundwater source. Thermoelectric power plants withdraw the most water at 42%, and irrigation is not far behind at 37%.

Thermoelectric power plants are the largest users of water withdrawn from surface water or a groundwater source. This could be seen as an engineering challenge. Why not capture the steam, cool it enough to condense it, and inject the water into the ground or a cooling pond? Then reuse that water, so the need for cooling water is minimized? Also, greenhouse growing cuts water use by about half when compared to open farming. There is a lot we could do to use water more efficiently. Looking forward, it could make sense to phase out thermoelectric power plants and replace them, primarily with efficiency, and then with PV and hydroelectric. 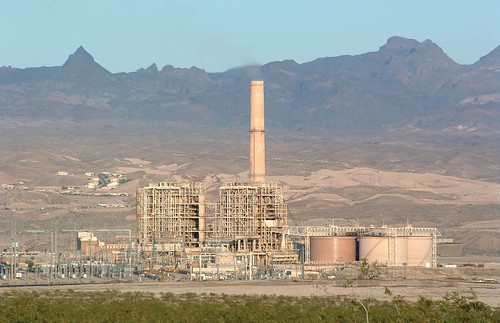 Looking forward, it could make sense to phase out thermoelectric power plants and replace them, primarily with efficiency, and then with PV and hydroelectric.

Our work in home performance can reduce both water use and withdrawal by thermoelectric power plants. There is a movement afoot for electrification of all homes. I agree with this movement to drastically reduce our dependence on oil. We are learning more about how to air seal and insulate homes. “Airtight, insulate right, and ventilated” is taking root.

We need to recognize the full value of what we do and then help those who work with us to see how useful the work we do is. The National Renewable Energy Laboratory (NREL) reports that direct household water use is way less than water use to produce household electricity (see Figure 2). This is where we come in. The national average water used to produce 1 kWh of electricity at thermoelectric power plants is 50 gallons of cooling water (see Figure 3). (By comparison, a study conducted in 2003 by NREL determined that the national-level water consumption for hydropower in the United States is 18.2 gal/kWh. That study aggregated the water evaporation from individual reservoirs using yearly averaged pan evaporation data.)

Think about that. A home performance company that achieves a reduction of 30% household electricity for a family of four could reduce the need for 16,740 gallons of cooling water a month needed to produce that electricity. This equals 200,880 gallons per year. The fact that energy efficiency in homes reduces water use is a great public relations message for our companies and utilities. 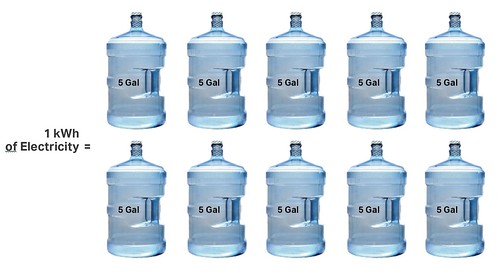 What More Can We Do to Reduce Our Personal Water Use?

Assuming that we have our house in order, there are a few other things we might consider. We may never completely do either of the following two things, but even a small change can make a big difference.

If we look at transportation’s thirst for ethanol, we see that producing 1 gallon of ethanol takes, on average, about 100 gallons of water. In some regions, however, ethanol production can take 3 or more times that amount—mostly depending on the amount of rain and the need for irrigation. Then there is the production of biofuels, which has increased sharply in recent years, with a significant impact on water demand. Between 264 and 1,068 gallons of water are needed to produce a single gallon of biofuel. We often gauge our work by its payback. We might want to consider some of Cornell University’s research. According to Cornell University ecologist David Pimentel, growing corn and processing it into 1 gallon of ethanol requires 131,000 Btu of energy, but the resulting ethanol contains only 77,000 Btu. And since fossil-fuel-powered equipment is used to plant, harvest, and process the corn and distribute the ethanol, the numbers only get worse. There are several suppliers of ethanol-free gas in your area. Mr. Google can help you locate them.

See the statistic about the water used to make 1 liter of ethanol.

Get the statistic about how much water we “eat."

The Water We Eat

We need energy to power our daily lives. The energy water–nexus and food are unavoidably connected. Absolute numbers of people don’t influence water demand as much as does our diet. The total amount of water embedded in the food we eat is beyond humongous. We eat no less than 924 gallons a day. But this number greatly varies depending on what we eat.

Consider meat. The animals we eat may live years before being slaughtered for our consumption. The feed they eat was grown, watered, and harvested. All this takes water. The meat from those animals was transported to market, transported home, refrigerated, and then prepared for us to eat. That takes more water.

Meat is the most water-intensive thing we eat. It takes 15,400 gallons of water to produce a pound of beef. It takes 643 gallons to produce one cheeseburger. Two pounds of pork chops, 1,582 gallons. Two pounds of chicken, 1,136 gallons. We could really reduce our water intake by avoiding meat one day a week. Meatless Monday is an informative site to consider. The less meat we eat, the less water we are eating.

Table 1. Water Use by Diet

Clean energy is often defined as energy produced with low amounts of carbon. Clean energy is the value proposition that we have attached to our energy efficiency work. We can provide that value by reducing water use as well as energy use. I thank each and every one of you in this industry for your commitment to such a transcendent purpose.

John Tooley recently retired from Advanced Energy and now owns and operates John Tooley, LLC, where he consults, coaches, and does trainings on business and building science.