Does doing it right make us money?

A version of this article appears in the March/April 2015 issue of Home Energy Magazine.
SHARE
Click here to read more articles about Business Best Practices

In 2013, Energy Trust of Oregon decided to explore a fundamental shift in its quality management of existing-homes contractors. Based on the program’s specifications for measures installed, the goal was to develop more cost-effective, contractor-centric quality control strategies to reduce the need for on-site verifications by the program, as well as corrective actions for the contractor. CLEAResult (the company I work for) and Advanced Energy, a North Carolina consulting firm, teamed up to conduct the eight-month consultation for eight contractors—six of which are home performance contractors. The lessons learned from that effort can help our home performance business overcome challenges to implementing quality tools and build greater efficiencies into our operation.

Essentially, my role was to understand the contractor’s perspective as we introduced the quality control strategies. For one of my first field visits, I documented the attic installation for a participating contractor. The crew had just finished prescriptive air sealing and was transitioning to baffle the can lights, at which time everything stopped. They did not have the baffling material in the truck to complete the preparation. A crew member called the project manager, who then relayed the message to the warehouse. The crew waited for almost an hour for the project manager to deliver the proper material on-site so the crew could complete the attic preparation for cellulose insulation (see attic preparation photos). 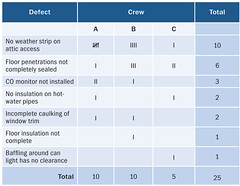 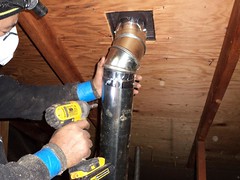 Attic Preparation: The bath fan was exhausting directly into the attic. To remedy this, the crew member replaced the fan ducting so it could terminate to the outside. (Kevin Berg) 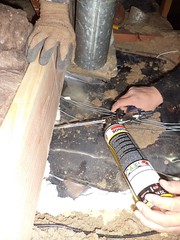 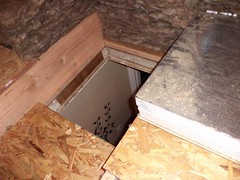 Attic Hatch: Weather-stripping an attic hatch requires few materials and takes only a few minutes. However, a return trip to install it can cost the contractor hundreds of dollars. (Kevin Berg) 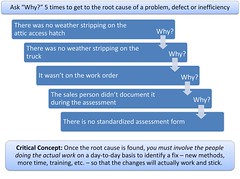 Figure 1. Finding the root cause of a problem can be done by asking the question “Why?” five times. (Co-Developed With Advanced Energy) 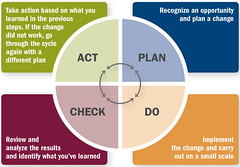 Figure 2. A method for testing possible solutions to a companywide problem. (Advanced Energy)

Now fast forward to an office meeting with both management and field crew present where we were working through the cost of poor quality for extra material runs. First, we introduced a blame-free agreement so the crew felt that they could provide honest feedback. Then I relayed what I had witnessed on-site and asked the manager how often this happened. He said that it happened forty percent of the time. I looked over to the crew, who were shaking their heads. “Fifty percent?” I asked. “Sixty? Seventy? How about eighty percent?” The crew nodded their heads. The manager was stunned. This exchange illustrates a moment where management’s perception of the operation changed when the field crew provided direct feedback. Very few managers know what poor quality and inefficiency costs. The answer we get is, a lot. We have learned that it is hard to get conformance to requirements and standards where there is no data-based knowledge of what noncompliance costs.

Challenge: To apply quality tools, we need to shift from opinion to data.

Other contractors in the consultation did not necessarily have one overriding quality issue to address. This then begged the question: How do we prioritize quality issues and wasteful activities that cause the contractor headaches and expense? To compile the necessary data to identify trends, we asked each contractor to assign one person to document all defects (that is, anything that needed to be reworked), and inefficiencies (for example, extra material runs) for one month. Many of the contractors balked, saying that they were too busy fighting fires on a day-to-day basis. We responded by suggesting that this method would help them to identify which of the fires were recurring and would help to prevent them from repeating. Furthermore, they would obtain their best data during the busiest times, because admin and crews were stretched, and breakdowns in the workflow would be more apparent.

We had them document the defects in a simple event journal that then fed into a tally sheet (see Table 1). As we see from this example, two of the defects logged during the month of March comprised 60% of all defects. What’s more, the two defects were logged for all three crews, which pointed to a potential information breakdown. Applying the Pareto principle, or 80/20 rule, solving the underlying cause for just those two defects would give the contractor maximum return for his or her investment in time. The goal is not to eliminate all defects at once, but rather to focus on the most expensive and frequently occurring defects.

Because owners and upper management make key decisions based on dollars, it was important to calculate a dollar figure for each defect or inefficiency, in order to gauge its impact on the bottom line. Returning to our first example, we walked the contractor through the step-by-step consequences of an extra material run: the phone call, coordination, travel time, truck mileage, and lost production. When we applied the owner’s dollar figures to each of these consequences and multiplied them by the number of times each extra material run occurred, we calculated that the extra material runs cost the company approximately $60,000 per year. Given a 10% profit margin, it would take $600,000 in extra sales to cover this cost.

Challenge: To get to the root cause of a quality issue, we will need to shift blame from the employee to the process.

Once a quality defect is clearly identified—for example, no weather strip on the attic hatch—it’s time to look for a solution (see attic hatch photo). However, we found that, rather than looking for solutions, management had a propensity to blame the field crew. This stemmed from the fact that many of the contractors had no standardized training program and would train new hires informally by having them shadow an experienced installer. This, in effect, made the field crew responsible for any installation defects. Inevitably, this approach disenfranchises the employees and seeks to only fix the symptom, rather than looking for, and correcting, the root cause of the problem.

We introduced a common method of finding the root cause; we call it the Five Whys analysis (see Figure 1). It’s simple, and we don’t have to ask exactly five why questions. The goal is to work methodically through the why questions until you reach a satisfying answer. In the example shown in Figure 1, the analysis worked upstream to place the root cause of the problem on the lack of a standardized assessment form. We learned that this information exchange between sales personnel and installers was a common cause of problems for all eight contractors. Instead of laying blame on the crew or sales team, we focused in this case on the assessment form.

Before implementing a solution companywide, it is best to test that solution. The method that we use is called Plan-Do-Check-Act (see Figure 2). In this case, first, plan to draft a standardized assessment form to include all essential items, including the attic hatch weather strip. A checklist can be an excellent standardization tool. For example, Energy Trust provides checklists for key measures, such as attic insulation, to help the contractor keep track of the work scope, and the details of installation. Second, do implement the solution with only one salesperson, to test it out. Third, check to see if the crews installing projects for that salesperson notice a marked reduction in the targeted defect. If not, note what problems are still being missed by the time they reach the crew, add those problems to the assessment form, and continue to monitor. Fourth, once you have successfully developed a standardized assessment form, act on the solution by distributing the form to all sales staff.

Challenge: Change is difficult—you’re going against established inertia in your operation.

Once we decide to standardize, we need to set clear expectations for implementation, holding employees accountable. To implement a specific process change, we learned that the contractors needed to identify a champion to help push through the inertia of the old process and establish the new one. For instance, one of the contractors decided to change his end-of-day check-in process for the work trucks. Under the new process, they would check into the warehouse before they parked their trucks—something they had not done during the old process. The contractor had a champion—the operations manager, who decided that he would closely monitor the follow-through.

Once the change was communicated to the crews, the operations manager would sit in his truck every evening and watch as the trucks returned for the day. Out of habit, many of the crews went to park their trucks right away, so they could head home. Before they could park, however, the operations manager would guide them over to the warehouse, where they needed to check in inventory, clean the truck, and submit paperwork. At first, the crews were not thrilled with the change, but slowly they began to see the benefits the following morning, when they showed up for work ready to get on the job. By the end of the fourth week, they were lining up without prompting and checking in their trucks.

To connect the idea of improving the process to the actions of the contractors, we pointed to their recurring safety meetings. The contractors had established these meetings as part of the process used to standardize work practices and reduce accidents. This focus on prevention enabled us to introduce new quality control systems and reinforce commitment to improvement. We identified a champion for each of the eight contractors to implement these new solutions and to help document them in a quality improvement plan.

Each of the eight contractors completed a quality plan. In it they described their standardized processes and affirmed their commitment to continual improvement. They documented the methods they employed to implement quality improvement, such as event journaling, the Five Whys analysis, and calculating the cost of poor quality. This gave some of the contractors more confidence in their ability to deliver quality to the customer, and they began to express this increased confidence in their sales presentations. Two of the contractors initiated a rewards system for their employees if they collectively reached a reduced-defect threshold. Neil Kelly Home Performance won the prestigious Housing Innovation award (presented by Home Performance with Energy Star) in part because of the improvement work this contractor accomplished during the eight-month consultation.

Get more information about quality management.

As home performance contractors, we are experts at identifying the weak points in the house as a system. Now let’s use this same analysis and see our business as a similar system. Think of CFM reduction as a metaphor for areas where we are wasting money, or voids in the insulation as an inefficiency that needs improvement. If you are ready to deal with the weak points in your business, use the lessons learned from this consultation to help you develop a plan for remediation. Identify your champion, and then quantify the pain in dollars or number of occurrences so you can prioritize your time. With consistent improvement you will develop a high-performing business with greater cost savings and an enriching environment for employee input and contribution.

When we want to motivate people, the most common thing we do is dangle a carrot in front of them to get more of what we want, and use a stick when we want less ...