Measure Where All Your Power Is Being Used, Part 1

Just over a year ago, we moved into a new house (new for us, at least). Our excitement waned a bit when we saw our first power bill. We weren’t too happy about the thought of paying over $100 a month for electricity in our small space—1,500 square feet, two floors, and two permanent occupants, excluding somewhat frequent guests. In addition, we had always thought of ourselves as conservationists. But having our usage rated several tiers higher than the minimum by our provider, PG&E, made us feel like we should be doing more. The way our (and we think most other peoples’) power bill works is that when your usage exceeds a utility-defined lowest tier, any additional energy you use is charged at a higher rate. Typically, there are several tiers, and the rates increase substantially as you pass from one to the next. Because of this, you can sometimes cut your power bill significantly by cutting only the power you use that falls in the top tier. For example, it is often possible to cut your bill in half by cutting your usage by a lot less than half. 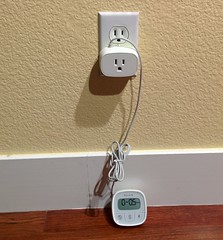 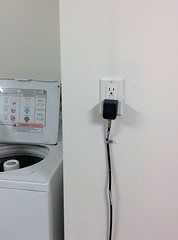 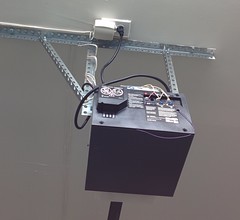 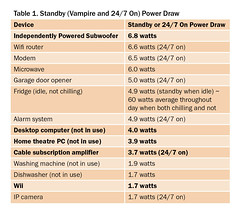 We therefore embarked on a mission to get our power usage within the lowest tier, as defined by our power company. To this end, we made some immediate changes that have been discussed many times by many other people, such as replacing all our incandescent lightbulbs with CFLs or LEDs. This approach made a major difference in our total monthly consumption, but we wanted to know more about where our electricity was going.

We ended up using mostly two tools, The Belkin Conserve Insight energy use monitor and the smart meter the power-company installed outside our house.

The Belkin Conserve Insight is a very simple device that you plug into your wall and into which you plug an appliance whose power usage you want to monitor. It resembles the famous Kill A Watt, but it is more precise. The Conserve tells you the power being drawn by your appliance to the nearest 0.1 watt, whereas the Kill A Watt (our model at least) is precise only to the nearest watt.

The Conserve is a generally fantastic product, but it does have a few limitations. One of these is that it will not tell you the exact power usage value for any device that uses less than 0.5 watts. To get around this limitation, you measure power usage differences, instead of measuring absolute values directly. For example, you can plug a power strip into the Conserve and plug a control device (something with a near constant power draw) into one of the outlets on the strip. Then plug the device whose power you want to measure into another outlet on the strip and note the difference in power usage the Conserve reports. This allows you to measure the power draw of devices like smartphone USB-power bricks, whose 24/7 standby power draw we found average between 0.1 and 0.3 watts. Measuring value differences is a more robust experimental procedure anyway, as it corrects offsets in the zero point value of any measurement apparatus.

Lightbulbs have gotten a lot of attention in terms of potential power savings for homes. This is for good reason; you can save a lot of money replacing an incandescent bulb with an LED or CFL bulb. It is easy to figure out how much power any lightbulb in your home draws. It is usually written on the box or on the bulb itself. You can verify these values by plugging the lightbulb into a lamp and the lamp into the Conserve. For the most part, this exercise is a waste of time, because bulbs are labeled very accurately. We found at most a couple tenths of a watt of difference between the rated power use for a CFL bulb and the measured value. However, many homes have dimmer switches that allow you to dim bulbs in fixtures. We have a few LED bulbs in such fixtures that we leave on 24/7 or nearly 24/7. To estimate the power use of this situation, you can use the Conserve in conjunction with a lamp and an external dimmer switch. You plug the dimmer switch into the Conserve, and plug your lamp into the switch, and dim the switch to measure the power used at various brightness levels.

While not every device in your home that uses power can be plugged into the Conserve, a surprising number of your devices can be. And a surprising number of these devices use power 24/7, when plugged in, even when you might consider them to be in an off state. Examples include your microwave and your garage door opener. This is what is commonly known as a standby, or “vampire” power draw. Other devices, such as the modem and wireless router, we leave on and operating 24/7, and so they draw power continuously.

While it is important to minimize standby power usage, that isn’t the whole story. After we made the changes described below (“How We Minimized Standby Usage”), standby usage accounted for about one-quarter of the total power usage at our house. For devices like our TV and fridge, active power usage (power draw when the device is on, or active) accounts for most of the total power draw. We discovered this by leaving these devices plugged into the Conserve for several weeks to get our average power usage. For example, we determined that our fridge consumes on average 60 watts based on our usage patterns, whereas the idle power draw was only 4.9 watts. In general, our fridge and our electric clothes dryer are the two biggest consumers of power at our house (each using 40–50 kWh per month, depending on exact use and climate).

The Conserve also has a useful power over time feature. This feature shows your total and average power usage over the period of time a device is plugged into it (which could be weeks if desired). By using this feature, you can discover other interesting drains of power as well. For example, our gas stove still draws an average of 400 watts of electricity when it is in use (presumably to operate the fan and ignition). You can also use the power over time feature to see the effect of lowering your TV backlight during average viewing for example.

(Coming up in Part 2: Using Your Smart Meter and Circuit Breaker to Measure Everything Else and Part 3: How We Minimized Standby Usage)