BY INDIGO RUTH-DAVIS
WEB ONLY

This online-only article is a supplement to the July/August 2015 print edition of Home Energy Magazine.
SHARE
Click here to read more articles about Passive House Approach

Two recent Passive House (PH) consultations of mine have made clear the difficulty of making the PH standard more widely adopted in this country. Both consultations were for small, single-family homes. Neither house was more “green” than the other, but one was able to meet the PH standard and one wasn't—even with R-values over 100. I'll explain in this article how two seemingly minor differences, the shading conditions and the area-volume (A-V) ratio, had a huge impact on the energy demands of these otherwise very similar projects.

Getting to a level of efficiency anywhere close to the PH standard is exceedingly difficult here in Vermont. While a PH uses 4.75 kBtu per square foot per year (kBtu/ ft2/yr), a typical new house in my area might use 40–60 kBtu/ ft2/yr. My house, for instance, a 2 x 4 construction from the 1950s, uses 65 kBtu/ ft2/yr. I've found that really good windows, double the typical insulation levels, and good airtightness will get you in the 15 kBtu/ ft2/yr range. It makes sense in just about every situation to try to get into this ballpark. The final 10 kBtu, from 15 kBtu to the PH standard, are usually increasingly painful to shave off. Minor details, such as how the windows are installed, could make or break meeting the standard. Increasing levels of insulation make less and less of a difference. Cutting heating costs by 65–75% isn't easy but always makes sense in my book. Cutting costs by 90–95% is always an admirable goal, but it isn't always possible. 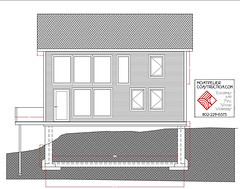 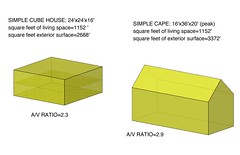 Figure 3. The A-V ratio of a design should be carefully considered in PH design, as small differences can have surprising effects on the energy balance.

Figure 4. This graph shows the effects of the solar gain potential on the energy demand of both projects.

Figure 5. This graph compares the progression from a code-built home to PH levels of insulation and airtightness for both projects.

The two house designs have a remarkable number of similarities in key features that typically affect the energy balance. Both are located in the harsh, near 8,000 heating degree-day, climate of central Vermont. They both use 12-inch vertical truss joists filled with dense-pack cellulose to the exterior of an insulated structural wall. They both use PH triple-pane windows that cover about 6% of the thermal envelope. The only two features that set them apart are the ratio between the exterior surface area of the envelope to square feet of livable space, or A-V ratio, and the shading conditions of the building site. These factors alone were enough to more than double the energy demand per square foot in Chittenden.

The Windsor design has a more efficient A-V ratio, at 2:9, than the Chittenden. The Chittenden will have a heated but unfinished basement, which brings its A-V ratio up to 3:4. In general, the larger and simpler a building's geometry, the lower and more favorable the A-V ratio. This is most obvious when you compare, for example, a skyscraper to a ranch. A skyscraper will have many floors where there are only four exterior surfaces, while a ranch has six exterior surfaces per floor. Even when comparing a modest two-level cube to a Cape with the same livable space, the results are noticeable and need to be considered in PH planning (see Figure 3). Because the PH certification criterion is based on heating demand per square foot of living space, PHs are highly susceptible to changes in this ratio.

The other key difference between the two projects was the difference in solar gain potential (see Figure 4). Without solar gain, it would not be possible to build a PH in the far north. The Chittenden exemplifies this point. The site is located on what was the eastern shore of the Champlain Sea thousands of years ago. The land is almost flat to the west but it rises steeply to the southeast. The house will be located in a dense mixed forest, with little clearing. I calculated that with its current shading conditions, the site won’t receive more than 52% of potential solar radiation. The effect on the energy balance was significant. In a PH, the windows usually contribute as much or more heat than the heating system. On this project, the solar gain from the south glazing couldn't even offset the losses from the four windows and one door on the east and west sides. There were no windows on the north side. On the other hand, the Windsor project could support three small north-facing windows.

I used PH energy modeling to determine that it was important to increase the glazing area of the Chittenden house by using larger fixed-pane windows. The client wanted to avoid having to use a crane to set the windows, so I was limited to a size that could be safely managed by a three- or four-man crew. These top-performing windows gain as much heat as they lose (unlike the homogenous wall section), and they provide desirable daylight, but they won't be able to lower the heating demand to PH levels.

In a typical design process, the seemingly minor differences between the two houses and site conditions might have been barely mentioned. In these projects, they meant the difference between PH certification and just plain efficient.

The Chittenden home’s shading analysis was the first sign that we weren’t going to meet the PH criteria, but it wasn't until I delved into the energy modeling that I realized just how hard it would be. Figure 5 shows the progression from a code level of insulation to the PH standard and beyond. The first drop-off in energy demand is the introduction of triple-pane PH windows. The next drop-off is in airtightness, starting at 5 ACH50 and going down to the PH benchmark of 0.6 ACH50. The practicality of reducing airtightness further starts to outweigh its effect after this point. Here (Figure 5) the Windsor project is around triple the PH standard, while Chittenden is still in the realm of conventional construction.

It’s Not About a Number

When everything that can be done with window size and placement has been done, and the building is as tight as possible, there is nothing left to tweak but the insulation levels. As Figure 5 shows, there is a point where that stops working too. The Passive House Institute US (PHIUS) is in the process of developing a climate-based standard that will be more sensitive to this reality than the original standard framed in Germany. Knowing where to draw the line with diminishing returns on insulation can be difficult. On the Chittenden project, the goal was to use a cord or less of wood for heating. I figured that 10.5 kBtu/ft2/yr was a good place to stop adding insulation. This will leave enough wiggle room to account for variations in woodstove efficiency and year-to-year variations in temperature. The average insulation levels will be just slightly less than those in the Windsor PH, but with a fuel source as renewable and cheap as wood, even at double the demand per square foot, this house will be cheaper to heat than the PH.

Get more information about PH.

In both projects, using the PH approach was essential, even though the Chittenden couldn’t meet the PH standard. Using a prescriptive recommendation like R-20 for the basement, R-40 for the walls, and R-60 for the roof simply doesn’t provide enough information to make smart design decisions concerning energy use. Understanding the importance of the A-V ratio, of window size and placement, and of site shading made far more of a difference than insulation levels in these houses. Using PH design methods on both projects helped me optimize efficiency to a level that worked for the client. Both houses will be extremely comfortable and easy to heat, and will reduce carbon emissions—regardless of whether or not they get a certification.

Indigo Ruth-Davis works at Montpelier Construction in Vermont and is a Certified Passive House Consultant.