A version of this article appears in the Fall 2019 issue of Home Energy Magazine.
SHARE
Click here to read more articles about The Back Porch

Recent articles about Induction Cookers, notably an opinion piece in the The New York Times, have sparked heated debate regarding the pros and cons of induction cooking vs. gas cooking. There are hundreds of comments at the end of some articles, from all sides of the issue, but there’s a commonality to many: Authors underestimate their audience’s level of understanding. Targeting just the range top instead of the bigger reasons to remove the gas line from new-construction homes is trivializing things. This is evident in the hundreds of comments left by knowledgeable and opinionated readers (over 700 in the NYT piece!). The issue is not how people will cook in the modern home, but how people will heat the air and water in their homes—less tangible for some than cooking. The induction cooker in some ways serves to downplay that issue, like a rodeo clown, running distraction on what will be a wholesale change for new construction. By focusing on a portable induction cooker (when in reality the home of the future will have a modern range-top of an array of cookers) is to trivialize the transition itself.

Richard Young is the Director of Education at the Food Service Technology Center (FSTC), a research and education energy center owned and operated by Frontier Energy and funded by PG&E, the California Energy Commission, and other municipal and investor owned utilities. FSTC helps make commercial kitchens more efficient. “The way that the whole gas vs induction range thing has been represented has been fairly simplistic and really missing the point,” Young says. It’s as if the articles wish to bring it home to people’s kitchens, where there is a connection to cooking, but consumers have been doing their homework. They know the issue at hand is how we heat our homes and make our hot water. “Readers know more than we think. They are coming back with legitimate arguments.” 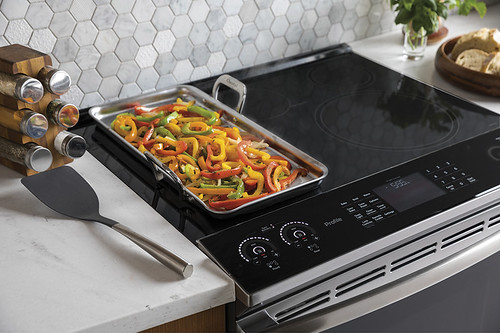 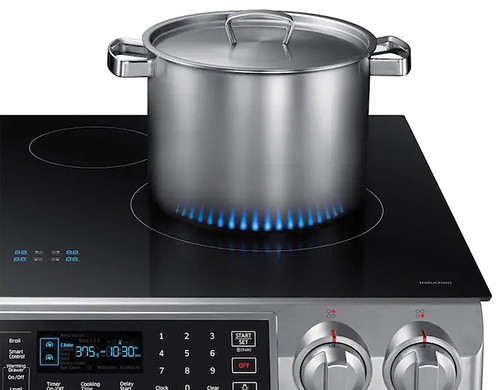 The Samsung NE58K9560WS was one of the induction cooktops used in the study. (Courtesy of Samsung)

“The [articles] are approaching the subject all wrong, and the readership is getting it, and pointing out the obvious, like exaggerations. The reason to get rid of the gas range in a new construction home is to get rid of the gas line. From a carbon standpoint, we don’t care as much about the difference between the gas range and the induction cooktop. You use your range so little; it is a low impact appliance. The object of the game is to get rid of the gas space and water heating equipment that has long hours of operations and a much bigger carbon footprint. But the gas range is simply the one thing in the house that somebody would care about that they would continue to demand a gas connection.” Not everyone notices what’s in their attic or basement, but they notice what they have a direct relationship to in their kitchen. “Nobody is going to say, ‘Man, I just want my gas furnace.’ … But people’s emotions are very much against the typical electric range, because it’s been a dog for various reasons.” Not so, the modern induction range top. “A benefit of the induction range top is the ability to control the temperature, and when you turn it off, it’s off. There is little residual heat; the range is no hotter than the pan itself." The modern induction range top is nothing like the dread coil-element electric stoves of the past.

The induction cooker is unarguably safer than the gas range, faster at cooking things, and more efficient BTU-for-BTU than gas. Nevertheless, what the readers get and the authors perhaps underestimated, is that the selling of the induction range top is not the best path. We need to be honest with consumers about the end-goal of replacing gas space- and water-heaters in the home of the future, so we can get straight to working on doing away with gas lines in new, all-electric homes, discussing the hurdles of bringing the technology up to the task, dealing with power storage at regional or neighborhood scales with battery back-up, and the health concerns of a new technology moving in.