BY SEAN MAXWELL
WEB ONLY

This online-only article is a supplement to the January/February 2016 print edition of Home Energy Magazine.
SHARE
Click here to read more articles about Ventilation

In 2014, Steven Winter Associates (SWA) was asked to review an entire portfolio of very similar buildings with the intention of developing a current inventory of heating equipment and identifying maintenance and capital upgrade priorities. A property management company had recently taken over management of 38 four- to five-story steam-heated masonry buildings in Queens, New York, all of roughly the same size (40 units) and vintage (1920s). The property owner urged us to rip out the older boilers and put in new ones, but the company managing the buildings wanted to take a data-based approach to making decisions, and we had a lot of data at our disposal.

One thing that stood out was the wide range of energy performance among the buildings, some of which performed up to 30% worse or better than the average similar building in SWA's own database of building performance. Thirty-seven of the 38 boilers were of the Scotch marine type; the other was a cast-iron boiler. The age of the boilers varied widely, but most boilers fell into one of two groups: “old” boilers built in the 1970s and “new” boilers built in the 1990s. We set out to see whether there were any links between the age of the boiler and other characteristics of the building. 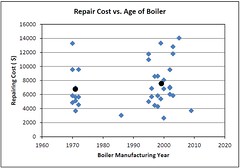 Figure 1. There was no direct correlation between boiler age and the building’s boiler fuel consumption. 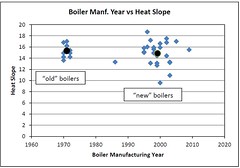 Figure 2. There appeared to be no dramatic correlation between boiler age and the building’s heat slope, with the average efficiency of buildings with new boilers only about 4% better than those with old boilers.

Repair Cost versus Age of Boiler

Figure 3. It appears that the old boilers often required fewer repairs than the new boilers, with 10% lower average repair costs.

Do older boilers use more energy than newer boilers? We found no direct correlation between the age of the boiler and the building’s boiler fuel consumption (including fuel used for heat and hot water). The buildings with old boilers were just slightly (3%) more efficient than the buildings with new boilers. Figure 1 shows boiler age plotted against fuel consumption. The black dot in the figure shows the geometric average of the groups of new and old boilers.

Clearly, energy consumption depends on other factors besides the age of the boiler. But is there anything that boiler age is a good predictor of? Are old boilers more expensive to maintain? In this study, we had access to boiler repair records for all the buildings, including the number and cost of tube replacements and welding costs for three years.

Surprisingly, the old boilers often required fewer repairs than the new boilers; average repair costs were 10% lower for the old boilers than for the new ones. See Figure 3. Still, we cannot conclude that the old boilers were somehow built better than the new boilers, because the Scotch Marine boiler design has not changed much at all in the past 40 years, and boilers built in 1975 are almost identical to those built in 2015. All of the boilers in the portfolio were replaced between 1970 and 1972. Some of these boilers were again replaced between 1995 and 2005, or 20–30 years into their operation. Many of these same new boilers were the subject of repeated repair calls in recent years.

How can we explain this accelerated rate of failure for some boilers? The reason could be the distribution system that the boilers are connected to. The boilers that were replaced early may have failed because the steam distribution systems they were connected to leaked too much water. Replacing lost water brings in fresh water, which is corrosive. Even the new boilers were being chewed away by the influx. Unless those distribution problems get fixed, the newer boilers are in fact more at risk of an early death than the old boilers. Many of the buildings had lengths of buried returns, and in some cases visible leaks, and these were noted in the survey.

In many cases, the buildings with new boilers had newer and better boiler controls. This may explain the 3% better average heat slope for buildings with new boilers. Yet the new boilers had 10% higher repair costs than the old boilers, and used 4% more energy on average for heating and hot water combined. Perhaps leaks in the distribution systems not only are causing higher heating and hot-water energy consumption, but also are damaging the boilers, leading to early replacement. Investigating boiler water consumption records would help confirm the hypothesis that boilers that consume a lot of fresh water not only use more energy but die early.

Look at the System as a Whole

This study, while it found no major links between boiler age and many other factors, reinforced the notion that replacing a boiler will not necessarily save energy or reduce maintenance costs. We need to look at the system as a whole. In fact, you could be basically throwing your money away if you don't find and fix the other problems before you replace the boiler.

Exhaust-only ventilation is one of the most common strategies for single-family and multifamily buildings alike. In multifamily structures, exhaust is pulled out of the apartments, often in bathrooms and/or kitchens, and fresh air is ...