A version of this article appears in the May/June 2014 issue of Home Energy Magazine.
SHARE
Click here to read more articles about Multifamily

What if you could save all the energy going down the drain in a multifamily building? The Sewage SHARC system is designed to do that. SHARC stands for sewer heat recovery, and the system has been proven effective in the apartments and common areas for residents of the Seven35 Building in North Vancouver, British Columbia. The city of Vancouver gave the builders a density bonus of additional units allowed due to the inclusion of a wastewater heat recovery system, making it possible for the building to hold 60 apartments. The SHARC system is generally feasible for buildings with 100 or more units, but in this case it proved effective in a smaller building. 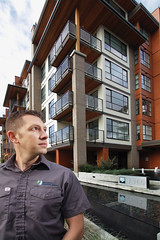 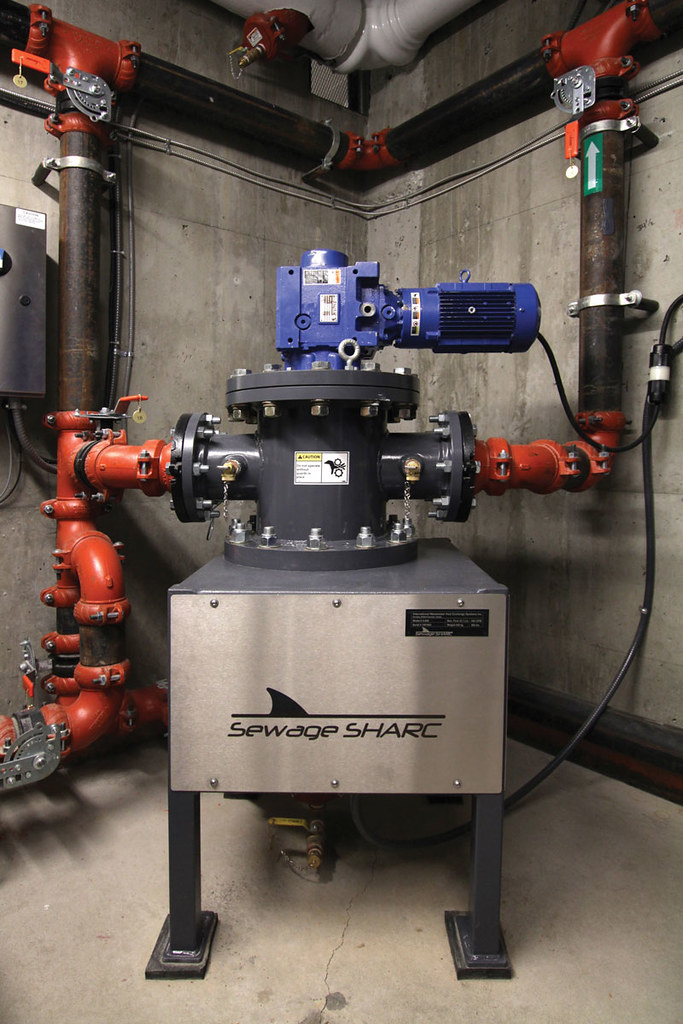 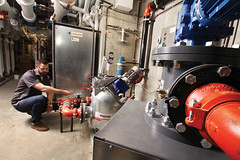 Raw sewage enters the system in the background and exits the Sewage SHARC filter in the foreground. (INTERNATIONAL WASTEWATER SYSTEMS) 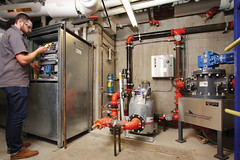 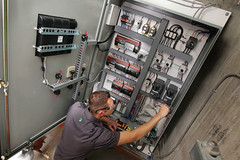 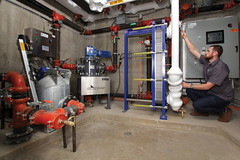 The Sewage SHARC uses two Florida Heat Pump (FHP) water-to-water heat pumps to extract heat from the wastewater leaving the building. The two 5-ton FHP heat pumps preheat incoming domestic hot water (DHW) to 52°C (125°F) and store 480 gallons of preheated DHW in the mechanical-room storage tanks. The 52°C-preheated water is then flowed into two booster tanks that are heated to 60°C (140°F) by a natural-gas boiler. See Figure 1 for a more detailed description of the system.

As it was a first installation of a new product, International Wastewater Systems, which manufactured and installed the Sewage SHARC system and system controls, subsidized the cost of the SHARC system for the Seven35 Building. In general, on the small end of the scale the full cost of the system would be in the range of $220,000–$250,000 depending on the various options chosen.

A team from International Wastewater Systems, installed flow meters, temperature sensors, and electrical meters throughout the heat recovery system at the Seven35 building in order to monitor and record the amount of energy used and recovered by the system. Adera, the developer for the Seven35 building, commissioned a third-party engineering firm to analyze hot-water energy use in the building for the week of August 18, 2012, to August 25, 2012, in part to satisfy the requirements of the city of North Vancouver for a third-party verification of an effective wastewater heat recovery system.

The data showed that, if the building were equipped with conventional 90% efficient equipment instead of the waste-heat recovery system, it would use approximately 830 kWh on average per day to provide DHW. The week of data shows that the heat pumps used 81 kWh per day, the other pumps used 10 kWh per day, and the top-up by the boiler used 115 kWh per day, for a total of 206 kWh per day for DHW. This represents a 75% reduction in energy use as a result of using the Sewage SHARC system at Seven35 rather than a conventional hot-water system (see Figure 2).

International Wastewater analyzed other critical components of the SHARC system over the two-year operational study, during which regular scheduled maintenance was performed.

The sewage-holding tank was closely monitored, and no buildup of solids or surface coatings was found in or on the tank. The bottom of the tank was completely clear and free of all buildup.

International Wastewater has collected data for the two years that the Seven35 residential building has been occupied and operating. These data actually show slightly better performance overall than the use monitored by a third-party engineering firm mentioned above during a week in August 2012. The two-year monitoring shows the daily energy use by the heat pumps and the other pumps to be 85.68 kWh per day. The energy used to top up the DHW with the natural-gas boilers remained consistent to the monitored data at 114.64 kWh per day. There was a slight increase in system operating efficiency to approximately 76% energy savings.