What the 2015 IECC Means for Contractors and Home Buyers

A version of this article appears in the Fall 2016 issue of Home Energy Magazine.
SHARE
Click here to read more articles about Codes and Standards

The latest International Energy Conservation Code (IECC) sets a high bar for residential energy efficiency, and slowly but surely states are moving toward more energy-efficient homes. Along with stricter energy goals, the 2015 IECC introduced standard options for airtightness tests, as well as an Energy Rating Index to simplify a home’s energy efficiency for the average home buyer.

The IECC was developed by the International Code Council (see “The International Code Council”). The IECC constantly evolves to meet the industry’s current energy efficiency needs. Over the years, new requirements have been added to the IECC to increase the overall energy efficiency of buildings. Some states resist these changes, and some choose not to adopt an official statewide residential IECC at all, leaving this up to local jurisdictions. In fact, of the 50 states, 10 either haven’t adopted a residential IECC, or are operating under a code that is as old as, or older than, the 2006 IECC.

However, most states have embraced the energy codes and are updating the energy-related portions of their statewide building code. As of March 2016, 13 states were operating under the 2012 IECC and 19 were operating under the 2009 IECC. Finally, 8 states have already adopted the 2015 IECC and are writing the updates into their building codes. Those states are Alabama, Hawaii, Illinois, Maryland, Michigan, New Jersey, Texas, and Vermont.

So what does the 2015 IECC mean for contractors? 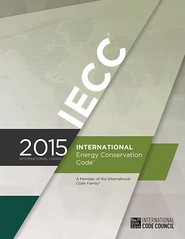 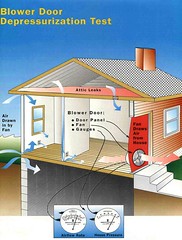 A blower door test will measure building envelope air leakage rates, which is a test required in the 2015 IECC. (The Energy Conservatory)

A contractor conducts a blower door test to see if the house meets the 2015 IECC air leakage rate requirements. (The Energy Conservatory) 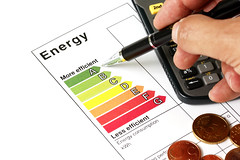 The Energy Rating Index (ERI) will make it easier for homebuyers to understand the energy efficiency of the home by displaying its ERI number. (MPanchenko/Shutterstock.com) 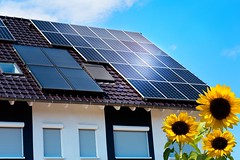 Solar panels can help lower the ERI number of the home. (magicbeam/Shutterstock.com)

Biggest Changes to the 2015 IECC

In terms of airtightness testing, little has changed from the 2012 to the 2015 IECC. Building envelope testing is required to verify air leakage rates of less than 5 ACH50 in climate zones 1 and 2, and 3 ACH50 in zones 3–8 (see Figure 1). Duct leakage testing requires air leakage rates of less than 4 cubic feet per minute/100 square feet of conditioned floor area at a test pressure of 25 Pa.

However, there are a couple of noteworthy updates to the 2012 IECC. The first is the addition of two industrywide standards for blower door testing. The second is the introduction of an Energy Rating Index (ERI), which helps home buyers to make informed purchases.

E779 specifies the test method for measuring building envelope air leakage using both pressurization and depressurization blower door tests. This test should be avoided during high winds, or when there is a large temperature difference between outdoors and indoors.

Under this standard, there are limitations on the conditions under which the test can be conducted. These limitations are based on the difference between indoor and outdoor temperatures and the height of the building.

Under the two-point method, the house pressure is tested at 50 Pa and at 12.5 Pa, and the test is repeated five times. A baseline measurement is taken before and after the test is conducted. This test is used for determining air leakage parameters that are used in natural-ventilation models. It requires taking measurements that are more accurate than measurements taken using the single-point method, because this test uses more complex techniques of data analysis.

After testing is completed, ASTM E1827 requires contractors to choose whether to pressurize, depressurize, or both.

The report should state which method was used. It should also describe the building, including address, elevation, and date of construction. Give the floor area and volume for each conditioned space. Describe the HVAC system, say what test equipment was used, and give the wind speed and direction and indoor and outdoor temperatures.

These two formal standards for blower door testing are a welcome update to the IECC, because they make it possible to test consistently. While there were requirements for air leakage testing in the 2009 and 2012 IECC, neither referenced a formal test standard. The 2015 IECC requires contractors to follow one of the two ASTM test standards described above. This not only ensures that testing is consistent and repeatable, but also helps to ensure that the test is performed correctly. 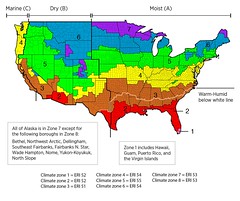 With the 2015 IECC comes the introduction of a new Energy Rating Index (ERI). The ERI provides flexibility for builders by allowing them to bring in a third-party rater, such as a HERS Rater, to give the home a numerical score based on its energy-saving characteristics and climate zone. The state or local jurisdiction can specify which ERI it will use. Many of them have adopted RESNET’s HERS index, which is based on ANSI RESNET Standard 301-014

“To date, over 1.5 million U.S. homes have been rated under the RESNET standards, and in 2013, half of all new homes were issued a HERS Index Score.

Think of the ERI as being something like the mpg rating on a car. It provides a simple way for home buyers to compare the energy efficiency of two or more houses. The lower the number, the more energy efficient the home, with zero being a net zero home. On the opposite end of the spectrum, a home with an ERI of 100 is about as efficient as a home built to the 2006 IECC standard.

For climate zones 2 and 3

When Michigan adopted the 2015 IECC in February 2016, the state also amended its prescriptive testing path, which ensures that dwellings have air leakage rates equal to or less than 4 ACH50. Michigan also states that the test is to be done by a certified third party if the code official so requires. The duct leakage test allows the use of either total duct leakage or duct leakage to outside at 4 CFM/ 100 square feet at 25 Pa. Each state and each county has the option to modify the latest IECC to be either more or less energy efficient.

How the ERI Helps Home Buyers

The introduction of the ERI will benefit home buyers in particular, since most of them find it difficult to evaluate home performance and energy efficiency. Building envelope, conditioned space, and air changes per hour are technical terms that most people have never heard before. To fully understand the industry terminology takes specialized education and training. The ERI helps break down those terms in ways that are easy for lay people to understand.

One concept many car buyers understand is mpg. The higher the number, the better the gas mileage and the more money that stays in your pocket. The ERI works the same way, only in the opposite direction. The lower the number, the more energy efficient the home and the less money you’re paying to utility companies.

A Caveat Within the ERI Compliance Path

While the ERI can make home-buying decisions simpler, it can also enable builders to cut corners.

The ERI compliance path gives credit for installed high-efficiency items that aren’t covered in the 2015 IECC. These items, such as solar panels and high-efficiency HVAC systems and appliances, can compensate for decreased efficiency in the building envelope.

Learn more about the Energy Conservatory.

See the complete text of ASTM E779, and a list of the items to be included in the report.

Read the complete text of ASTM E1827, and a list of items to be included in the report, go to .

See the source of the statement on the number of homes issued a HERS Index score.

Nevertheless, introducing the ERI, and two formal standards for blower door testing, are steps in the right direction. They give builders defined options for testing and new goals to aim for, and they give home buyers an easier way to understand the energy efficiency of their homes.

Driving along the rolling township roads of Appalachian Ohio, it’s easy to understand the opposition to community solar being whispered beyond the fence lines. This is proud and powerful coal country, after all, ...