Why Don't We Build Better Houses?

BY ANTHONY DENZER
WEB ONLY

This online-only article is a supplement to the Fall 2016 print edition of Home Energy Magazine.
SHARE
Click here to read more articles about Solar

Did you know that the solar house was a popular concept in the 1940s, and that architects like Fred Keck, an American modernist architect based in Chicago, Illinois, could save their clients 30–40% on heating energy by using simple passive techniques? My book, The Solar House: Pioneering Sustainable Design, describes some of the early experimental houses that used active-solar heating systems. One question I do not address in the book, but that I am always asked when I give public talks, is why we aren’t building houses like that now. If simple passive measures were common and effective in the 1940s, why aren’t they used by architects and home builders today?

The answer is not simple, and everyone must accept some of the blame. My friend Monte Paulsen posed his own version of this same question in a 2011 article in Canadian Geographic. Superinsulation techniques were developed north of the border in the 1970s and ‘80s. “We invented high-performance homes,” Paulsen asked, “so why don’t we build them?” He concluded that the marketplace is caught in a circle of finger-pointing. Home builders say that buyers and brokers baulk at paying extra for efficient homes, while buyers say they cannot find efficient homes for sale. 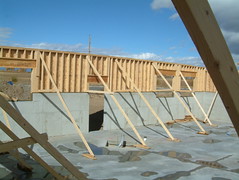 A typical American construction site would look odd to a Swedish homebuilder, where construction quality is much higher. (Anthony Denzer) 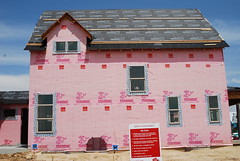 Newer homes may include a continuous air barrier and taped seams. This is a positive step, but much more can be done. (Anthony Denzer)

This circular blame game has been substantiated in academic research. An Ohio State University study (Garrett and Koontz, 2008) asked home builders and home buyers about the lack of availability of passive solar houses. The builders said lack of demand was the number one problem, while an overwhelming majority of home buyers said that builders did not offer passive solar.

Homebuyers and homebuilders both certainly share some of the responsibility for this lack of housing type. Homebuyers generally act like shoppers, and they are offered little information about the true range of options. Houses on the market aren’t required to have the equivalent of a car’s mileage sticker. When placed in the role of shopper, homebuyers passively accept the options available, and choose based on considerations other than science. In Britain, author Ben Adam-Smith addressed the demand-side problem of the consumer, saying that it’s up to the consumers to demand more from their houses. “The market is really not going to change until we get fussy,” he said.

And home builders are generally more concerned with reducing first costs than with reducing operating costs. They have little or no incentive to reduce a home’s operating costs, because they will walk away when the paperwork is finished. And they seldom offer warranties on a home’s performance. “Just imagine,” says Allison Bailes (2014) “how energy efficient new homes would become if builders were on the hook for the first three years of energy bills!”

Local governments do a poor job of demanding (or incentivizing) energy-efficient planning and construction. In Wyoming, where I live, the planners are beholden to the concept of growth, and they welcome anyone who can contribute to growth, regardless of design quality. Apart from LEED-ND’s Solar Orientation credit, I’m not aware of any incentives for developers to consider passive-solar principles in the planning process.

On the real-estate side, lenders do not help home buyers to act as intelligent investors with regard to energy (or anything else), and they have no method for figuring future energy savings into lending equations. Realtors and appraisers are generally uneducated about these issues. I recently learned that the leading appraiser in my state regards PV systems as having no value! The National Association of Home Builders acknowledges this problem in a web page entitled Valuing Green Homes for What They’re Worth.

But architects should not sit on the sidelines while home buyers, home builders, planners, and bankers blame one another. Architects are not very heavily involved in the home-building industry at present, except for boutique projects. Most home building in the United States is driven by developers, who may not even engage an architect. “Architects have largely marginalized themselves by completely separating themselves from what people want or care about in regards to homes,” says Tedd Benson (2008). The history of the solar house includes several figures—again I’ll point to Fred Keck as an exemplar—who did engage this messy world and made energy-saving houses for ordinary people—houses that were models of high architecture.

View the NAHB web page entitled “Valuing Green Homes for What They’re Worth.”

One issue that prevents architects from engaging in the building industry is that the culture of architecture is forgetful. The next new thing is the priority. The “culture of next” places no value on iterative, rational, anonymous decision making, and you won’t be rewarded for making a subtle incremental improvement to an established pattern. Architects in this country learn history as a collection of styles and ideas, but they generally do not learn the utility of history, or methods for applying historical knowledge. Sim Van der Ryn makes this point in his most recent book, Design for an Empathic World. In particular, I would add, architects do not know what is important in the history of building technology and building energy use. Contrast this with the design culture in Sweden or Switzerland, for example, where considerable importance is placed on a pragmatic and collective approach to long-term problem solving.

And finally, the term passive-solar house has negative associations for some professionals and laypeople. Call it an Age of Aquarius hangover. For example, an attached greenhouse immediately signals “hippie” to many. I sometimes use the eccentric solar architecture of the 1970s as a laugh line in presentations, in order to set up a serious point about the savings in residential energy use made after 1973—and to emphasize that progress can be credited to the earlier experiments that I describe in my book. But the fact that I can count on the laughs is significant.

So why don’t we build better houses? We have the science and we have the technology. We are not waiting for a revolutionary new invention. Nor do builders lack access to this information. Zero energy houses that build on the history of the solar house are feasible, affordable, and attractive. The barriers are cultural and institutional inertia, and there’s plenty of room for architects to learn from history and show more leadership.

Anthony Denzer is the department head of Civil and Architectural Engineering at the University of Wyoming and director of the Building Energy Research Group.