A version of this article appears in the Fall 2018 issue of Home Energy Magazine.
SHARE
Click here to read more articles about Training and Certification

Without teachers, imagine how long it would take and how painful it would be to learn new stuff. Trial and error over and over again! (That sounds like something Yogi Berra might have said!) I’m lucky that a number of folks have taken me under their collective wings and each in his or her own way, taught me how to do stuff (or sometimes how not to do stuff!). There is currently a thread on www.heatinghelp.com at The Wall, titled “Most memorable technician you worked with?” I chimed in about a man I worked with long ago, named Otello. He certainly gave me some different perspectives to work with! Here’s what I said:

Long ago and not far away I worked with a guy named Otello. He was the maintenance guy at a fancy girls’ school, and I was his helper. When I was cleaning paint brushes with solvents, he'd show me his way, which was to hammer on the hard brush and then take it to a wire wheel. It was fast, but the brushes always were a bit shorter. To unstop drains in buildings, he'd pour commercial strength granulated drain cleaner in a cardboard tube, remove a cap from the drain line, shove the tube in and quickly reinstall the cap. After a few seconds, you’d begin to hear the rumble, feel the pipe get too hot to hold, and then a great whoosh as something broke loose. He'd mix acid and base drain cleaners together to clear a toilet, and try to hold it down with a plunger! This resulted in a quick trip to the hospital for burns all over his face and hands. For main lines, he'd take the steel sewer rod, tie a ball of barbed wire to one end of it and a school bus to the other end. He'd then use the bus to pull the wire through the line and we'd get wheelbarrows of crud from the pipes this way. He'd take his motorcycle to the desert and "thinking like an Indian," would go find relics nobody else could. Then he'd feel bad and return the relics the next year. He could make "antique" furniture that could fool the experts. At a coffee shop, he'd pour hot coffee into his milkshake and not stir. Then with a straw, he'd slurp up the drink, moving the straw to get hot, cold, sweet, and bitter in quick succession. I learned a lot from him about creative thinking. 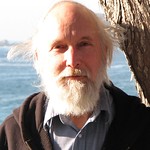 I’ve been lucky with mentors. They have shown me their ways of thinking and their tricks. With multiple perspectives, there’s almost no problem you can’t get to the root of.

I was taught something about electricity when I was 14, by a man named Hap. I couldn’t grasp the concept of parallel versus series wiring, so he had me apply 120 volts to a single Christmas tree light bulb. It burned out instantly with a bright flash. Applying the same voltage to a series of bulbs lit them all nicely, each adding resistance to the circuit, making it work well together. Words couldn’t have taught me nearly as well as his actions did. Hap also taught me how to service and rebuild a faucet, and I’ve been doing it ever since. It takes 10 to 15 minutes to properly fix a faucet. I’m talking about the old-style faucet that has a flat rubber washer and a brass seat that the washer rests against. Simply, you reface the seat, giving it a new flat, shiny surface for the rubber to meet up to. You also replace the washer, (or flip it over if the back side is good) and lube everything with faucet grease. It’s not hard. A friend in the San Francisco Bay Area needed this work done on a faucet recently. She called six plumbers and nobody knew how to do it! And they wanted $150 just to show up. She finally found a handyman who would just change the washer for $75. I need to teach some handypeople how to fix faucets!

Time to Be the Mentor

This brings me to my next point, which is about passing on what I’ve learned. Being an old guy, it’s my turn to mentor others. Actually, I’ve been teaching in one way or another for around 40 years. A couple of the guys I’ve worked with went on to become skilled craftsmen in their own right, exceeding my skills in many areas. But it feels good to have helped them get started. I like sharing what I’ve learned, and we really do need the graying workforce to train the next generation, or who will keep all of this infrastructure we have operating?

I’m teaching a younger friend all about the concept of efficiency. He’s a quick study, so he’s beginning to understand how much of what he runs across was done in the normal, inefficient way, and it frustrates him. It’s a good sign that he cares and grasps the underlying reasons for pushing efficiency and durability. Ultimately, if you do a job well now, it will take less of your time and money later. Putting thought into action, he’s managed to reduce his electric bill by over 60% and nearly eliminate a big propane bill. I’d happily work on Warren Buffet’s water heater for free if I got to hang around with him and gain some financial wisdom!

The Arts of Teaching and Learning

Andre, who was my English teacher in high school, mentored me in a very different way. Basically, we both grew up together. He is only about ten years older than me, and we wound up exploring our area on motorcycles. I got to know his parents and some of his brothers. He taught by example, demonstrating how to listen to others, coming up with interesting and insightful questions, and appreciating others for the learned or innate talents they brought to life.

Finally, one more mentor, Allan, who knew more about water heaters than nearly anyone. I was getting interested in water heaters and water heating and wanted to find somebody I could talk to about the many nuances of the field. There was nobody in the United States who knew AND wanted to share what they knew. Repairing water heaters is certainly a planned-obsolescence sort of business, so nobody really was interested in discussing ways to break that cycle. Finally, I was aimed in Allan’s direction, up in Canada. He worked for a utility company that also leased water heaters, so he was interested in making them perform well and last a long time. I began by soaking up what he had to share, but pretty soon I was able to give him information back, sharing my experiences in the field of solving hot-water problems and keeping water heaters alive. It became a fun two-way exchange that helped us both.

All my mentors have been different, and all of them have taught me to see through their eyes in their own way. Some with words or actions, some by showing me what not to do. Some by showing me alternate and rich perspectives.

How to Plumb the Depths

I take it as my responsibility to those who have mentored me to help and teach those who are trying now to learn what I’ve learned. They are unlikely to find the info in most schools, other than union training halls. Searching for the answer to a question on the Internet may help you solve a given problem, but doesn’t give you the depth of know-how that makes you into an expert. The quickest way to get there is to find a mentor and open your mind, so that mentor can pour some know-how in!

Larry Weingarten was raised on the Monterey Peninsula of California and has been self-employed most of his working life. He got his General Contractors license in 1982. Larry has written articles on water heating and energy for various trade journals. He has taught classes on these topics for Pacific Gas and Electric Company, the California State Parks, Affordable Comfort (now Home Performance Coalition), and others. More recently he has helped create DVDs on these and related topics. He finished building an off-grid home in 2006. Designed to be very efficient, comfortable, and inexpensive, it was the 13th home to meet the Thousand Home Challenge, a competition for creating superefficient homes. For over 35 years, Larry has been involved in rehabbing rental properties for fun, profit, and the adrenalin rush.

New Legislation in the House

There is cause for celebration this spring for all players in the home performance industry, as H.R. 1315 was introduced in the 116th Congress on February 27, 2019. New legislation that would support training for home ...

A House with Purpose