BY ETHAN SKUTT and IAN M. SHAPIRO
WEB ONLY

This online-only article is a supplement to the January/February 2015 print edition of Home Energy Magazine.
SHARE
Click here to read more articles about Windows

An important factor in the airtightness of a building, and its energy efficiency, is the amount of infiltration allowed through closed windows and doors. Typical old double-hung windows are especially prone to infiltration.

One solution to this problem is to weather-strip the windows with vinyl V-strips. V-strips are backed with an adhesive, allowing it to be easily installed in the tracks and under the rails of most windows. In the winter of 2012, Ian Shapiro and colleagues at Taitem Engineering installed vinyl V-strips on all of the windows in seven buildings. Our goal was to gauge possible savings, and to assess such factors as reliability, resistance to window opening and closing, and ease of installation. We presented our findings in an earlier issue of Home Energy (see “Weather-Stripping Windows with V-Strip,” HE Sept/Oct ’12, p. 38).

The initial results from the 2012 study were very good. Weather-stripping with plastic vinyl V-strips appeared to be a reliable and cost-effective way to dramatically reduce air infiltration, with an average of 9.2% infiltration reduction per building.

Figure 1. The diagram shows perpendicular motion of a surface relative to a V-strip.

Figure 2. A sliding motion of surfaces relative to a V-strip. 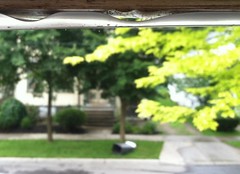 Figure 3. In this window, the adhesive backing remained attached to the wooden sash, but not to the V-strip itself.

However, we soon began to hear anecdotal reports of V-strip failures in the seven field test buildings. In response to these reports, we performed a follow-up study to evaluate the extent of the failures, and to identify possible causes.

Before the inspection began, we speculated as to what factors might be causing the V-strips to fail. Could it be the sun’s heat affecting the self-adhesive backing? Maybe it was the movement of the window sashes, mechanically ripping V-strips off the windows? Had we failed to prepare the surface properly before we installed the V-strips? We recorded data based on these conjectures. We also recorded our observations about the condition of the V-strips. Could we see sunlight between the V-strips and the window frames? Did the V-strips feel rippled or bumpy when we ran a finger down their lengths?

The results were not what we expected. When we conducted the 2012 study, we created a test rig that repeatedly opened and closed a window, to approximate the lifespan of the V-strips. The V-strips had held up well under this accelerated lab test, for the equivalent of 40 years of daily use. To our surprise, after a year and a half of operation in real-world conditions, we found that 16% of the V-strips had failed.

The second possible explanation we explored was that the V-strip failure was caused by the action of the window sashes in operation. This seemed likely, as the sole cause of premature failure during the prior study had been the “catching” of V-strips on the window latch.

To explore this possibility, we classified the movement of a window sash in relation to the V-strip. We defined perpendicular surface action as a moving sash closing shut on the windowsill, with a V-strip in between (see Figure 1). We defined sliding surface action as a V-strip positioned between two moving coplanar surfaces (see Figure 2). For example, a failure between the meeting rails of the two sashes would be a sliding failure.

We found that 85% of V-strip failures occurred in windows classified as frequently opened (opened and closed at least once a week). This did not come as a surprise, because it makes sense that the V-strips would experience more wear and tear in a regularly operated window. Fifty-two percent of failures in frequently opened windows were identified as sliding, as opposed to only 23% of failures in windows not frequently opened. These findings suggest that while V-strips positioned in sliding areas are more susceptible to operational failure, something else was causing the detachment of perpendicularly situated V-strips.

Finally we explored the possibility that faulty surface preparation had caused the V-strips to detach. We had been careful doing the original surface preparation: We sanded surfaces with sandpaper and a finer abrasive pad, vacuumed sawdust and dirt, wiped the surface with a damp paper towel, and allowed it to dry. During the inspection, we checked the condition of the area uncovered by V-strip detachment. We found nothing to indicate that surface preparation had been inadequate. But underneath the V-strips, we found evidence of an unexpected cause of failure. Under the lower rail of the lower sash, an area subject to perpendicular window action, the adhesive backing remained attached to the wooden sash, but not to the V-strips themselves (see photo above). In other words, the adhesive connection had failed between some V-strips and its adhesive.

Though we found this flaw only on the underside of the lower rail of the lower sash, it is possible that it was a factor in the failure rate of the weather strip overall. This conclusion is supported by the fact that underneath 67% of failed V-strips there was residual adhesive backing left on the wood. The detachment of some of the V-strips from its adhesive appears to be a manufacturing defect.

We are left in something of a limbo. Weather-stripping windows with self-adhesive vinyl V-strips offer the potential for substantial and cost-effective energy savings. The 2012 study also shows good ease and flexibility of installation over a range of crack sizes. And vinyl V-strips causes fewer problems, such as making windows difficult to operate, than metal V-strips. However, vinyl V-strips appear vulnerable to detachment of the adhesive from the V-strips themselves; to mechanical failure where it is subject to sliding action; and possibly to degradation due to solar exposure. While the 16% failure rate we found may not appear high, it is still high enough that we need to find ways to reduce the failures.

Ethan Skutt was an intern with Taitem Engineering and participated in the follow-up study described in this article. Ian M. Shapiro founded Taitem Engineering in 1989. He has led several applied-energy conservation research projects, led many design and energy projects, and conducted workshops on energy and ventilation, among other things.

By Joseph Petersen and Sarah Widder

Improving the insulation, solar heat gain, and infiltration characteristics of windows can significantly improve overall thermal performance by reducing heat transfer through the window and by decreasing air leakage into and out of a home. ...

By Theresa Gilbride and Katherine Cort

One recent addition to the cost-effective efficiency measures available for home retrofits is low-e storm windows. These high-performing window attachments are up to 25% more efficient than single-pane or double-pane windows. Recent validation studies by DOE ...