BY JOHN DIXON
WEB ONLY

This online-only article is a supplement to the January/February 2015 print edition of Home Energy Magazine.
SHARE
Click here to read more articles about HVAC

The rules regarding home energy savings are changing. New technologies and shifting realities are showing us that many of the old energy-saving dictums are now obsolete. If, for instance, you look at the top energy-saving tips offered by experts 15 or 20 years ago, the idea of duct sealing is virtually absent from that list. Instead, we were taught that projects such as replacing windows or insulating walls were the most effective strategies for saving home energy. This has changed.

It’s not that experts didn’t know that leaks in the ductwork are typically the single biggest source of home energy waste. It’s just that there really wasn’t an effective solution to the problem. Sure, you could use tape or mastic to manually seal some of the leaks. But most ductwork is located behind drywall or under insulation, or is simply impossible to reach. Effectively accessing and manually sealing those leaks required some degree of demolition, and for both logistic and economic reasons, this was simply a deal breaker.

So the problem was virtually ignored, and advice to homeowners continued to focus on turning off lights and investing in Energy Star appliances. We were resigned to living in a world where the average home lost about 30% of its heating-and-cooling energy through leaks in the ductwork. 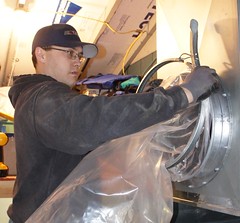 The sealant is delivered to the inside of the ductwork via long flexible tubing attached to a temporary access point. (Aeroseal LLC) 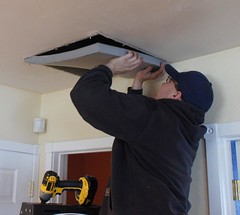 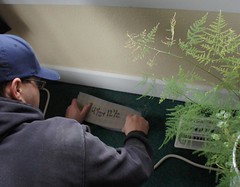 In preparation for sealing, all registers are blocked with foam plugs. (Aeroseal LLC)

Itwas this gnawing reality that set the wheels in motion to seek an effective solution. Around 1994, DOE got together with EPA, and several utilities to invest in the research needed to finally solve this problem. They asked the scientists at Lawrence Berkeley National Laboratory (LBNL) to come up with a way to seal leaks throughout the duct system—even those that were hidden behind walls or that were otherwise inaccessible. In addition, the solution had to be safe for use inside occupied homes. It had to work without interfering with the proper operation of HVAC systems. It had to be easy to apply, and it had to be cost-effective to use.

Quite a Tall Order

You can imagine how daunting a task this mission to seal duct systems must have seemed to the LBNL team assigned to come up with a solution. It took real innovative thinking to flip the problem inside out in order to solve the puzzle.

The solution came in the form of an aerosol-based sealant that works from inside the duct system. It does not coat the entire interior of the ductwork but instead acts primarily at the leak sites.

The aeroseal process begins by blocking the wall registers so that air can escape only through the leaks in the ductwork. The duct system is slightly pressurized to 0.1 IWC, increasing to a maximum of 3 IWC during the sealing process. The sealant is then heated up and blown into the ductwork through an existing access point or through a temporary entranceway cut into the system. The dry, 7–10-micron adhesive particles remain suspended in air as they travel throughout the ductwork. When they reach a leak, they accumulate around it, bonding to one another until the entire hole is permanently filled.

Unlike some sealants, such as those used for weatherization or material bonding, the aeroseal sealant is a vinyl acetate polymer with a cure rate of approximately two hours. The sealant exhibits minimal VOC off-gassing, and because it is nontoxic, it has no OSHA maximum-exposure limitations. The technology has been used to seal leaks in school buildings, health clinics, and hospital buildings. In the majority of cases, the duct-sealing process is conducted while the building remains occupied. (For more on the development of aeroseal technology, see “Weatherization Test Drives Spray Sealant,” HE Nov/Dec ’01.)

About a year and a half ago, Doug Beiser and his crew at Hader Heating & Cooling installed a new energy-efficient air conditioner at a ten-year-old home in Liberty Township, Ohio. This was before Doug had heard about the aeroseal process, but he knew that Tim, the homeowner, was unhappy with his rising energy bills and was having trouble getting conditioned air to the upstairs of his two-story house. So Doug sold Tim an air conditioner with variable-speed technology, a two-stage compressor, and other features designed to solve both of these problems. Mastic sealant was used around the connections between the air duct and the new equipment, but, as is often the case, further duct inspection was minimal.

Doug made a call to Tim to find out how the new air conditioner was working out. Tim told him not so good. Despite all the innovations in the equipment, his utility bills remained high, and the rooms upstairs were still much hotter in summer and colder in winter than the rooms downstairs. By this time, Doug had learned about the aeroseal processand had become trained and licensed to administer the technology. He told Tim he would come right over to see what he could do.

At Tim’s house, Doug went around to some of the exposed ductwork in the basement and, holding a smoke device up to various areas along the duct system, showed Tim how leaks in the ducts were fanning the smoke in all directions. Then, using a simple tissue test, he demonstrated how the upstairs return grilles were not even getting enough suction to hold up the tissue. Clearly duct leaks were behind Tim’s high energy bills and his hot or cold upstairs rooms. While his new equipment was certainly adequate to cool the entire house efficiently, the leaks were wasting energy and keeping cool air from reaching all intended destinations—particularly those furthest from the air conditioner.

So Doug told Tim about the aeroseal process. He explained how it works from the inside of the ductwork to seal leaks. He told Tim that the process would take less than a day to complete, and that it was perfectly safe to use the sealant while the family remained at home. He also told Tim that the duct sealing not only would ensure a more even distribution of conditioned air throughout the house, but would save Tim a bundle on his utility bills.

But Tim was a home construction contractor by trade. Now that Doug had demonstrated that his problems were caused by leaks in the ductwork, he was pretty sure he could fix the problems himself by manually sealing the ducts.

So Tim went to work. He spent the weekend up in his attic sealing what he could find. He also sealed around the area the boots met the wood floor, and he sealed off every header in the basement. He really did a good job—using tape and mastic to seal every nook and cranny he could get to.

When Tim was finished, he invited Doug back to test out his work. To do so, Doug hooked up the aeroseal equipment to Tim’s ductwork as if preparing to do an actual seal. Since the computerized sealing process begins with a pre-seal measurement of airflow in the return and supply side of the duct system, and leakage, Doug could use the equipment to measure the current leakage rate.

Tim was not happy. He told Doug to go ahead and aeroseal his home. Since the ductwork was already prepared for the aerosol sealing process and the equipment was attached to the ductwork, the sealing was only a matter of instructing the system to blow sealant into the interior of the ductwork.

It took Doug and his assistant another twenty minutes to finish the sealing process. The computer monitor showed the progress in real time. In the end, post-aeroseal testing showed that supply side leakage was reduced to 22 CFM—about 90% better than what Tim was able to do manually. The return side leakage rate dropped down to 20 CFM—a 97% improvement.

Specifications aside, the real proof was that Tim and his family could immediately feel the difference. Registers in the problem areas were now moving the right amount of treated air into the affected rooms. Tim actually had to turn down his thermostat to get proper heating. Cold spots were, for the first time, getting sufficient heat. Tim estimates that he will save about 30% on his heating bill alone.

So the aeroseal not only accomplished what the latest equipment technology could not, it turned a skeptic into a believer and blew away the results obtained by the manual efforts of a professional contractor working on his own home.

Over the past three years or so, more and more contractors have become aware of this game-changing approach to duct sealing. The aeroseal process has been used to reduce energy costs, improve comfort, and increase indoor air quality in thousands of homes and buildings throughout the United States and around the world. From the state-of-the-art Arzanah Medical Complex in Abu Dhabi to the new Hyundai U.S. headquarters in Southern California, aerosol duct sealing is taking hold within the industry.

And while duct sealing is still not the first thing most energy-minded Americans think about, it’s quickly getting there. Now that there is an effective and cost-effective solution to leaky ducts, the rules are beginning to change. A growing number of energy advocates— from DOE and EPA to local utility companies and green building certifiers—have begun to advocate for aeroseal duct sealing as a recommended practice in both new construction and existing homes. With recent building code specifications for permissible duct leakage growing tighter and tighter, the duct sealing technology is quickly becoming recognized as one of the most effective things homeowners can do to reduce their energy bill and increase indoor comfort.

John Dixon is a freelance writer who has written and published numerous articles related to home performance and energy efficiency technologies. He is based in Portland, Oregon.