BY KRISTIN MOYE and BENJAMIN KNOPP

A version of this article appears in the Winter 2016 issue of Home Energy Magazine.
SHARE
Click here to read more articles about Multifamily

Designed, built, and managed by Community Housing Partners (CHP), Grissom Lane Apartments in Blacksburg, Virginia, are affordable homes for seniors and the first EarthCraft Virginia Net Zero Certified homes in the state. As such, each home produces as much energy as, or more energy than, it uses. One of the primary reasons the four duplexes were built to net zero standards was so that residents age 55 and over could continue aging in the same home for as long as possible.

In 2012, CHP and the town of Blacksburg committed to developing Grissom Lane Apartments to address a growing need for senior housing in the New River Valley. Through their combined experience, they realized that aging in place can be very difficult if a home cannot efficiently and cost effectively maintain the inhabitants’ physical comfort level. An inefficient home can often lead to utility bills that weigh heavily on the fixed incomes of many aging citizens. In fact, the Older Americans 2012 Key Indicators of Well Being report assembled by the Federal Interagency Forum on Aging Related Statistics identified housing cost burden (expenditures on housing and utilities that exceed 30% of household income) as one of the most significant housing problems facing aging Americans. While Grissom Lane resident utility bills are currently paid by CHP as the property manager, it is the hope of CHP and the town of Blacksburg that Grissom Lane will serve as a model both of innovative sustainable design and of ways in which that design can support affordable aging in place. 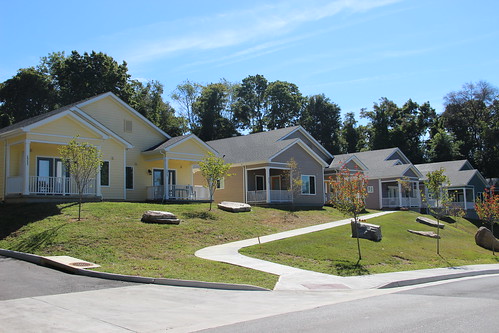 Community Housing Partners developed, designed, and constructed Grissom Lane Apartments in partnership with the Town of Blacksburg, Virginia, as a model of low-income housing for residents aged 55 years and older. 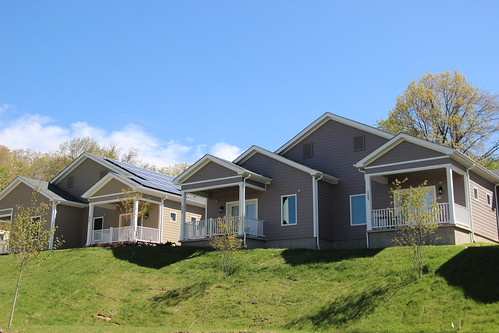 Located on 1.2 acres, Grissom Lane Apartments has four duplex cottages with each containing two apartments with two bedrooms. The apartments were designed using Universal Design features to help facilitate aging in place for its residents.

Once the homes were built and occupied, the units had to go through one year of energy monitoring in order to verify that they actually produced as much energy as, or more energy than, they used. During that one-year period, CHP learned ten invaluable—and surprising—lessons, according to the development’s energy monitor, Benjamin Knopp of Think Little, the company that served as energy efficiency consultant for the project.

The solar PVs outperformed all estimates.

The solar PV systems at Grissom Lane Apartments performed better than CHP’s and the installer's estimates. They proved to be extremely consistent and reliable.

Many people do not know that there is such a thing as a ducted mini-split, or that a well-designed high-efficiency heat pump may not need a backup heat source such as electric resistance. CHP was able to design a system that was 40% more efficient than a typical new 14 SEER heat pump, without electric-resistance heat, for about the same cost.

CHP learned several interesting things by analyzing the minute-by-minute energy consumption data from the energy-monitoring systems. For instance, there were some unusual energy spikes at certain times of the day. CHP shared these data with the residents and identified behaviors that were based on misunderstandings of the energy systems in their homes. By filling in the gaps in tenant education, CHP was able to improve resident comfort while simultaneously reducing unnecessary energy consumption. 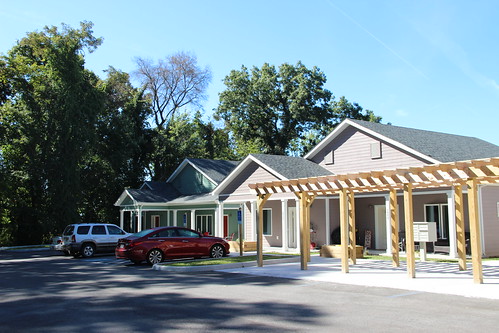 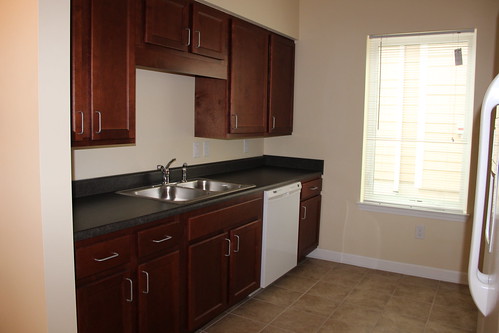 The kitchens at Grissom Lane Apartments were designed with Universal Design features, including “D” handle pulls on cabinets.

During 4°F temperatures, the mini-split units used as little as 30% of their heating capacity to maintain resident comfort.

The real-world performance of the mini-splits proved to be exceptional. Credit must also be given to the tight air sealing and the R-60 roof, the R-20 underslab, and the R-26 exterior wall insulation.

When occupants used Nighttime Setback, the heating system used twice as much energy as it did when occupants took the set-it-and-forget-it approach.

This discovery was made when CHP compared the energy consumption of the heating systems in two units that maintained the same average indoor temperature, but whose occupants used the thermostat differently. It seems counterintuitive, because using Nighttime Setback can save energy in homes with oversized single-speed equipment. However, CHP observed that using Nighttime Setback increases energy usage in high-performance homes with variable-speed equipment. CHP’s real-world evidence of just how much energy can be saved by leaving the thermostat at a comfortable temperature can benefit owners of high-performance homes.

This is another counterintuitive finding based on real-world energy usage data. Residents were experiencing cooler showers in the winter from a combination of colder incoming water and the type of antiscald safety device built into the shower hardware. The residents began switching off the Hybrid mode on the water heaters to have hotter showers, not realizing that they were using 4 times as much energy to heat their water. CHP proposed raising the temperature set point on the water heaters but leaving them in Hybrid mode. This win-win solution allowed the residents to have the hot showers they wanted while using as little energy as possible. Ultimately, it is better to use a little more energy from a heat pump than to switch to electric-resistance heat. 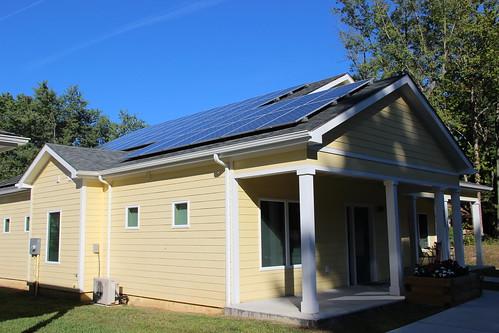 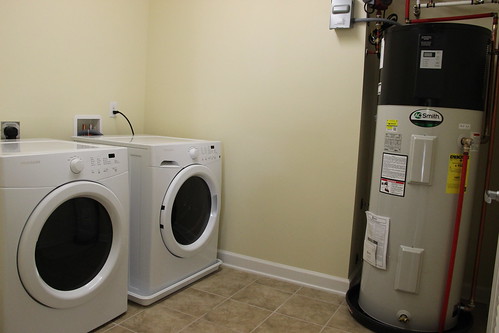 The spacious laundry room also provides ventilation for the hybrid water heater, as required by the manufacturer.

Raising the thermostat temperature for the entire home used less energy than using a space heater to raise the temperature of one room.

Grissom Lane Apartments would not have been Net Zero Certified without energy monitoring.

The energy monitoring allowed CHP to identify opportunities for resident education that had a big impact on total energy consumption. For instance, one unit was using over twice as much energy as the next-highest energy user. The team was able to identify the cause and provide education so that the resident could stay comfortable using only half as much energy as before.

The residents were generally eager to reduce their energy use to help reach the goal of EarthCraft Virginia Net Zero Certified, even though it had no financial impact on them, since their utilities were paid for by CHP. Some tenants even approached CHP to ask what they could do to reduce their energy use. After some discussion, they voluntarily replaced the incandescent lights in their plug-in lamps with LED bulbs.

The biggest variable in energy consumption was resident behavior.

In summary, the Grissom Lane Apartments teach us that while it is important for the home energy industry to continue to strive for increasingly efficient equipment, designs, and strategies, residents are the final active component of any energy-efficient home.

Kristin Moye is a design associate at Community Housing Partners (CHP). She is a LEED Accredited Professional with Building Design + Construction Specialty and an AIA (American Institute of Architects) Associate Member. Kristin is working toward becoming a licensed architect.