Part 1: Evaluation of Mini-Split Heat Pumps as Supplemental and Full System Retrofits in a Hot-Humid Climate

A version of this article appears in the Winter 2017 issue of Home Energy Magazine.
SHARE
Click here to read more articles about Retrofit

More stringent energy efficiency standards and the demand for higher efficiency are increasing the popularity of technologies such as mini-split heat pumps (MSHPs). The market for ductless heat pumps is growing 10–30% annually. The U.S. mini-split market has seen a 221% growth rate over the last seven years, and a 20% growth rate is expected to continue, thanks partly to the introduction of the highly efficient, inverter-driven compressor. Growth projections are supported by high customer satisfaction, but most of the research has been conducted on space-heating applications.

However, studies report highly variable MSHP energy savings results. In heating-dominated climates, MSHPs are typically supplemental retrofit installations, providing the primary source of heating to the rooms that are most used. Research on southern-climate MSHP installations, where the primary focus is on cooling, is limited. However, the sparse data suggest that MSHPs are installed primarily to replace noisy window units or to serve a previously unconditioned space, rather than to displace less-efficient central air-conditioning systems, where they can also be useful. MSHP research needs to focus more on field performance, as opposed to laboratory testing; on measured performance and savings evaluations in different climates zones; and on submetered load shape, energy use, and energy savings information. A case study evaluating MSHPs as a complete system solution in the hot-humid climate found comfort issues, and recommended that future research focus on field performance data.

The project described in this article was conducted to address the need for this research. The Phased Deep Retrofit (PDR) project, conducted by the DOE Building America team Partnership for Improved Residential Construction (BAPIRC) in collaboration with Florida Power & Light (FPL), sought to determine what impact the installation of advanced residential technologies had on annual energy reductions. Using this platform, researchers investigated the impact of MSHP retrofits to answer questions about energy use savings, peak load shaving, and comfort issues in the hot-humid climate.

Total house power as well as detailed energy end-use data were collected to evaluate energy reductions and the economics of each retrofit at each PDR study home. All of the homes were audited and instrumented during the second half of 2012; shallow retrofits were conducted from March 1 through June 30, 2013. Monitoring of hourly house power and the various end uses was accomplished with a 24-channel data logger, supplemented by portable loggers to take temperature and relative humidity (RH), located near the central system thermostat. (Additional portable loggers were launched to obtain room-by-room comfort data). Hourly power was measured by SiteSage loggers, generally using 50 amp current transformers. Interior temperatures were measured near the thermostat using Onset HOBO U-10-003 portable loggers.

Regression analysis was used to project space-conditioning energy savings for each retrofit measure. To estimate pre- and postretrofit annual space-heating and -cooling energy use, daily average ambient temperatures were regressed against monitored daily HVAC energy use.

In keeping with the statistical analytical concept of parsimony, this study used the simplest model that showed stable and reliable results with strong explanatory power, a linear regression using a single independent variable. Outdoor temperature (in degrees Fahrenheit) was used rather than outdoor temperature minus indoor temperature, because of expected behavioral changes with the supplemental or total MSHP replacement. Differences in interior temperature are likely with the MSHP, because uniform interior room temperatures do not typically yield the greatest comfort. Brand found that space-conditioning systems that facilitate zoning have significantly lower energy use. When a supplemental or total MSHP is added, it becomes likely that occupants will maintain different heating and cooling conditions in different rooms of the home.

For each site, the typical meteorological year 3 (TMY3) weather data were applied to the regression coefficients to normalize the savings.

The equipment chosen for this measure was the 1-ton ductless, inverter-driven Panasonic XE12PKUA. This is a 25.5 SEER unit with a heating seasonal performance factor (HSPF) of 12. The variable-speed units have an Air-Conditioning, Heating, and Refrigeration Institute (AHRI)-rated nominal cooling capacity of 11,580 Btu per hour at the 95/80/67 rating condition, ranging from 2,800 to 14,000 Btu per hour; and a heating capacity of 13,800 Btu per hour at 47°F outdoors. As shown in Table 1, homes receiving the supplemental MSHPs were highly varied, with central air-conditioning systems of various ages and efficiencies. Duct systems for all central systems were located in the attic space of each home.

a Air Handling Unit
b Some systems were apparently unmatched; stated are manufacturer listed compressor efficiencies.
c Duct leakage measured at a test pressure of negative 25 pascals with respect to the outside, divided by the building’s conditioned floor area. Site 12 results were projected as test pressures could not be reached.

The supplemental MSHPs were expected to reduce space-cooling and -heating energy by reducing the run time of less-efficient existing central systems subject to duct losses. However, the configuration with two different systems with potentially competing thermostats serving a single zone made it hard to guess how this would work out. Moreover, no existing simulation model can provide savings estimates, because having two HVAC systems serve the same zone violates limits for hourly calculations.

The indoor fan coil was centrally located within each home. In most cases, the unit was located as close as possible to the central return grille of the existing system, to help with room-to-room distribution of MSHP air when the central unit was operating. At install, the cooling set point of the MSHP was set either 2°F or 4°F lower than the central system temperature. Owners were advised against setting the central system fan to run constantly, to prevent moist air from compressor coils from being brought back into the home, and to avoid excessive fan energy consumption.

To examine how the supplemental MSHP influenced space-cooling and -heating energy, an evaluation method was applied to the measured data for each installation. The evaluation periods generally spanned about 18 months in total: January 2014 through July 2015 for the late-summer 2014 installations, and summer 2014 through January 2016 for the early-summer 2015 installations. Evaluation periods varied according to installation date, other retrofit measures, and other significant changes, such as a change in occupancy. Energy savings results were normalized to TMY3. Tables 2 and 3 show the cooling and heating results from the regressions ,along with the hourly-logged interior temperature (Int T) and RH (for cooling), as measured near the thermostat, before and after the MSHP retrofit. Space- cooling energy savings were large, with a median of 33%, 2,007 kWh per year, or about 6.7 kWh per day. The median daily space-heating savings were 59%, 390 kWh per year or about 6.5 kWh per day.

Table 2. TMY3-Normalized Cooling Energy Use and Savings from the Supplemental MSHPs 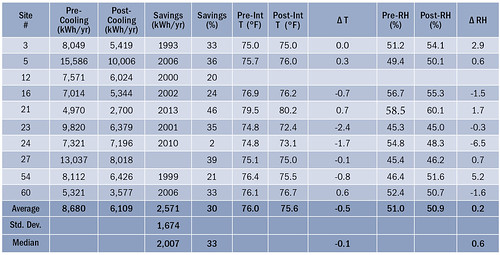 Table 3. TMY3-Normalized Heating Energy Use and Savings from the Supplemental MSHPs 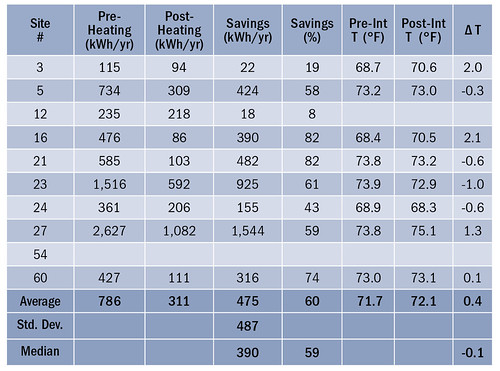 b Site had no pre-retrofit heating to measure.

Examining the sites as a group, cooling-season interior temperature and RH were relatively similar between pre and post periods, on average, and with dew points averaging 68.3°F pre and 69.2°F post. On average, no moisture removal advantage of the supplemental MSHP was apparent. The heating-season interior temperature was also essentially unchanged between periods, on average; however, there were some increases. Cooling-season ambient temperature was typically slightly cooler, averaging 0.4°F lower postretrofit (76.9°F versus 76.5°F).

However, there were significant variations for some homes. For instance, the innovative configuration showed a large improvement to interior temperature and RH at Site 24, with reductions of 1.7°F and 6.5%, respectively, where the average dew point exceeded 69°F both pre- and postretrofit.

The impact on savings can be large.

Assuming an 11.5% increase in energy use for every 1°F of postretrofit take-back, cooling energy savings would have been about 18% without the take-back.

The average percentage space-heating energy savings achieved by the supplemental MSHPs was greater than the average percentage cooling energy savings. This was because Sites 16, 21, 23, 24, 27, and 60 had electric- resistance heating (the other four sites had heat pumps). The MSHPs with the much more efficient, inverter-driven heat pump technology provided most of the heating capacity, which eliminated or reduced auxiliary strip heat of central systems. Figure 1 shows the time series data, where electric-resistance strip heat is highly visible, as is the reduction to the space cooling in summer and the very low power of the MSHP system for Site 60. 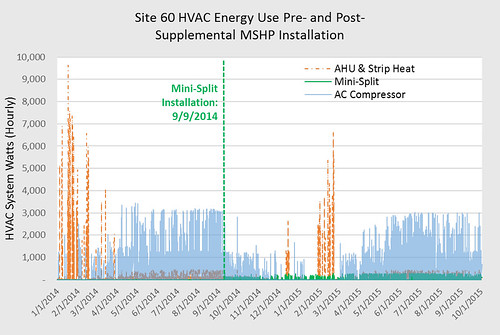 Table 4. TMY3-Normalzed Annual Cooling and Heating Energy Use and Savings from the Supplemental Mini-Splits 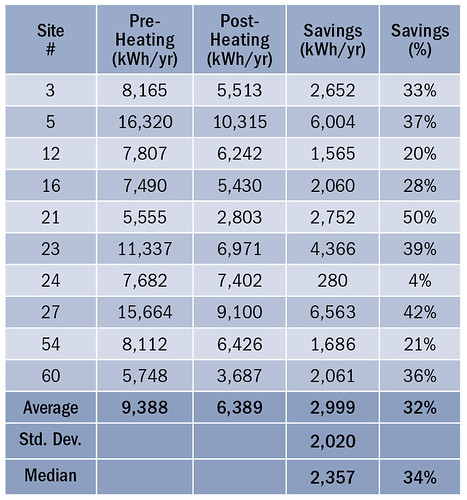 The average full retail cost for equipment, materials, and labor for each of the ten supplemental MSHP installations was about $3,900. The median annual HVAC energy savings translates into about $285 saved per year (2,375 kWh/year * 0.12/kWh), which yields a simple payback in about 14 years and an annual rate of return of 7.3%. In a mature market, economics are likely to improve with equipment and labor cost reductions—particularly as crews become more familiar with the relatively simple job of installing MSHPs. This cost analysis does not consider one notable benefit to the consumer—the redundant heating-and-cooling system for the home, which is highly desirable given the inevitable and unpredictable failure of central air-conditioning systems, some of which may take a few days to repair.

In order to evaluate the effect of the supplemental MSHPs during peak summer and winter hours, HVAC power demand at the utility coincident peak hours in 2014 were compared to that of 2015. Figure 2 compares the average HVAC demand of the ten supplemental MSHP sites for the summer peak, showing a large demand reduction of 0.50 kWh, or 16%. The winter peak evaluation is limited to the six supplemental MSHPs installed in 2014. Figure 3 compares the average HVAC demand at these sites, which shows a very large demand reduction of 2.06 kW, or 56% between 7 and 8 am. 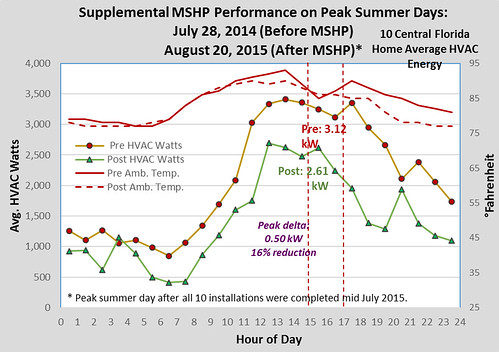 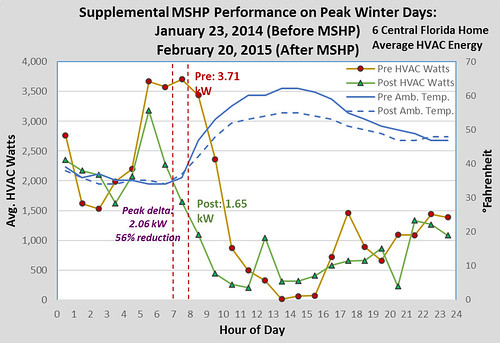 Karen Sutherland is a research analyst at the Florida Solar Energy Center (FSEC). Danny Parker is a principal research scientist at the FSEC. Eric Martin is a program director at the FSEC. All three of them work in the Buildings Research Division.

Welch, C. and Rogers, B, 2010.“Estimating the Remaining Useful Life in Appliances,” Proceedings of the 2010 Summer Study on Energy Efficiency in Buildings, 2:316–327. Washington, DC: ACEEE.

By Eric Moshier and Leslie Jackson

You enter the house on a winter’s evening, remove your wet boots and coat. In your living room, there are a few pieces of split, dry firewood, ready to burn. You open the ...

All-Electric is the Past and Future

Since 1993 the Federal Energy Information Agency (EIA) has reported a non-stop, national growth trend in all-electric buildings, led by the Southern states at 44% of all their built homes (Figure 1). Why is all-electric growing when conventional ...