ScanTheSun: A Tool for Solar-Panel Users

BY ERNEST GRODNER
WEB ONLY

This online-only article is a supplement to the September/October 2015 print edition of Home Energy Magazine.
SHARE
Click here to read more articles about Solar

In the ideal case of an individual installation, solar panels are mounted on the southern pitch of a roof of buildings with high insolation. (See “Vocabulary” for the definition of insolation and a few other words used in this article.) These conditions are fulfilled for houses without shading sources in the vicinity, where the area of the southern part of the roof dominates. However, even detached houses are often surrounded by trees or other kinds of greenery. In the city, neighboring buildings often cause additional shadowing of the sunlight (see Figure 1).

Sources of shading change the solar-energy stream reaching the panel, as well as the optimal orientation for the panel. Furthermore, the assumption that only the southern part of the roof is suitable for the panel arrangement may not be correct in some cases. Even partial shading may significantly reduce the output power of PV panels. In that case, it may be preferable to arrange the panels on some other part of the roof, or to install additional stands. On the other hand, residents’ habits may influence the placement of solar-thermal collectors. 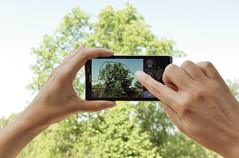 Shading sources are measured by touching points along the edges of obstructions on the touch screen. (Dominika Grodner) 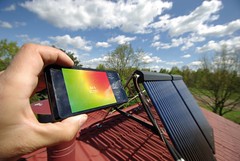 ScanTheSun helps to determine the best panel orientation, which is shown in the red area. (Dominika Grodner)

Figure 1. Insolation of a solar cell (yellow) with obstructions in the form of trees and buildings (gray). (Dominika Grodner) 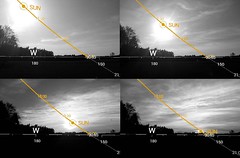 Energy by the Hour

Figure 3. Energy inciding on the panel plane during each hour. (Dominika Grodner) 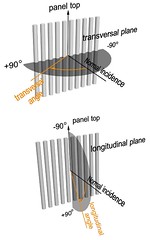 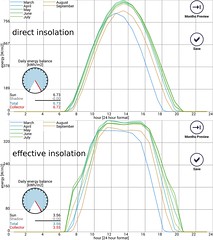 Figure 5. Comparison of direct and effective insolation of a tubular collector. (Dominika Grodner)

ScanTheSun is an app that’s designed for Android phones and tablets (it’s free and available on Google Play). The app utilizes a phone’s camera and a magnetic-field sensor to determine geographic north. The position of the sun seen on the camera preview is used to calibrate the magnetic-field sensor. This ensures precise determination of north.

The ScanTheSun app may help users to analyze the issues mentioned above. In particular, the app can be used

The app consists of three modules, numbered, respectively, A, B, and C. Module A enables you to get your geolocation, either with Google Maps or with the GPS sensor. Your actual geographical location is calculated using the sun’s position and its trajectory in the sky. See Figure 2.

Module B enables you to measure sources of shading. Obstructions that block the sunlight are measured intuitively by creating a contour of the horizon line. The contour, containing buildings, trees, or other obstacles, is created on the touch screen on which the camera preview is displayed. When the contour is complete, ScanTheSun will find the best panel orientation, taking into account the shade cast by all obstructions nearby.

Module C enables you to determine the best panel orientation. It calculates the sun’s trajectory in the sky for each day of the year, together with the contoured horizon to find the value of solar energy reaching 1 square meter of panel surface. A color gradient map displayed on the screen shows how this finding changes with the panel orientation. A model of atmospheric solar energy attenuation is used to account for irradiation changes as a function of the sun’s elevation angle. This model is based on seasonal deviations of 6.8% of the incoming solar radiation due to the eccentricity of the Earth’s orbit.

It is also possible to create daily energy curves showing the energy collected during each hour (see Figure 3). Hours during which energy collection stops (due to shadows on the panel) are also shown. Additional pie chart plots display the daily solar energy balance for the panel. In short, module C enables users to judge the overall quality of a given panel orientation.

Figure 3 contains information on the

The plots are stored in JPG format on the phone’s SD card.

It’s important to consider solar-panel optics when panels with complicated geometry (that is, other flat-plate panels) are installed. These include solar-thermal collectors in the form of evacuated tubes or heat pipes as well as PV panels with concentrators, and other hybrid collectors. The efficiency of panels with complicated geometry may depend heavily on the incidence angle of solar radiation. Therefore, certification companies have introduced incidence angle modifiers (IAMs) to account for the optical characteristics of these panels. A recent version of the ScanTheSun app has been updated to measure effective insolation ased on IAM data. The measured effective insolation is the amount of solar energy being effectively intercepted from incidence radiation, taking into account the optical characteristics of the panel. Therefore, ScanTheSun may help you to set up specific panels by showing you how they “see” the incoming sunlight.

A solar-thermal collector with passive tracking serves as a good example here. This type of collector absorbs almost the same amount of solar energy at different incidence angles, while the amount of energy absorbed by a flat-plate panel decreases as the incidence angle increases. This affects how optimal orientation of the panel is measured, since the range of acceptance angles for passive tracking collectors is wider than that for flat-plate panels. The angle also shows a significant effect when the energy collected during each hour is measured. See Figure 4.

ScanTheSun utilizes cosine-weighted IAM factors for effective insolation measurements where a product of longitudinal and transversal IAM has been adopted for panels with biaxial optics:

Figure 5 compares the measurement of direct insolation with that of effective insolation. Average energy yield per day for the period March–September differs in both measurements. The main reason for this difference is that the zero loss efficiency causes effective insolation (energy collected by a panel) to be less than direct insolation (energy hitting the panel plane). The shapes of the curves show that the energy collected during each hour also differs from the incidence energy. For effective insolation, the curves remain almost constant from 11 am to 7 pm. For direct insolation, the curves peak at around 1 pm. It is worth noting that all values displayed by ScanTheSun are calculated per square meter of gross area (not the aperture area of the panel). This makes it easier to calculate the roof area needed for an installation that will provide the desired output.

In a study conducted the company, ScanTheSun was used to determine the optimum solar collector arrangement on a detached house. The roof of the house has two slopes. These face east and west respectively; each slope is tilted at about 20°. Total annual solar energy yield is projected to be the same for both slopes. In selecting the correct panel position on the roof, ScanTheSun took two factors into consideration. The first was highest total energy yield. The second was shortest amount of time required to heat water.

Although there are no buildings surrounding the house, analysis has shown that around one-fifth of the solar energy is lost due to the shade of surrounding trees. How much of the remaining energy will be used by the panels depends on their orientation. If one stand of flat-plate panels is installed on the roof, 65–70% of the remaining solar energy will be collected independent of their position on the roof. If an additional stand of panels is installed, up to 80% of remaining solar energy will be collected. There is, however, a decisive argument for mounting the panels on the eastern slope of the roof. This argument is based on calculated hours of water heating. For the western slope, the water in the cumulative tank will be heated from 12 noon to 7 pm. Hot-water consumption in the afternoon will reduce the accumulation of thermal energy in the tank. This means that the water in the tank may not reach the required temperature, even though the overall efficiency of heating may be high. For the eastern slope, however, water will be heated from 7 am to 2 pm, and it will have reached the required temperature by the time the occupants have returned home.

Ernest Grodner works in the Nuclear Physics Division at the University of Warsaw in Poland. Since 2009, he’s also been a software developer of web and mobile applications.

Insolation – Amount of solar radiation falling upon a solar panel per unit area.

Zero loss efficiency –Efficiency when energy losses other than optical re not used.