A version of this article appears in the September/October 2015 issue of Home Energy Magazine.
SHARE
Click here to read more articles about The Back Porch

This spring in New Orleans I hosted “True Tales of Haunted Home Performance,” my first session at an ACI National Home Performance Conference. I was joined in this true storytelling event by seven home energy pros, who contributed their real-life stories—without notes or PowerPoint slides.

All the storytellers gave examples of what they had learned from the haunted houses they worked on, including the heat pump from hell, the Edgar Allan Poe home, and a hard lesson in sewage drain plumbing for a wannabe jack-of-all-trades. We'll be reprinting two of these stories in future issues of Home Energy.

My story was about time—the time it takes to build, move, and relocate a house—and how time anchors a house to the land.

My partner and I had read in a Berkeley (California) newspaper that the Cheney Cottage, a small two-story chalet-style house, was being offered by the University of California, an institution not known for selling homes, to the highest bidder. This house was unique—a city and state landmark, built in 1902 as a rental property by the family that lived next door, in what was then a residential community on the eastern edge of the campus. The original owners were Warren and May Cheney. Warren was a magazine publisher, author, and real estate developer. The university acquired the Cheneys’ main home and the smaller rental cottage in the 1930s, and by 2010, both homes were being used as offices. (The cottage was the office of the campus's Energy Efficiency program.)

The cottage spoke to us. It embodied lots of energy: old-growth redwood and Douglas fir, and amazing craftsmanship that did not deserve to end up in a landfill. My partner and I bid $17 (not wanting to be outbid) on the cottage and won it. The catch was that we had to move it by a certain date or it would be bulldozed. 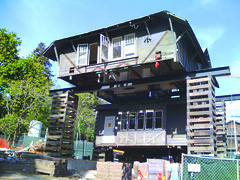 The Cheney Cottage at the UC Berkeley campus (left) and in its new home in South Berkeley (right). (Tom White)

We found that moving a house is not like picking up and moving a piece of lumber or a stone, unless that stone is actually a boulder buried beneath the surface. There were countless physical ties that anchored this house to its site over the years: steam pipes that ran from the campus heating plant through the house, a chimney, and a foundation with massive hold-downs to keep the building in one piece should the nearby Hayward earthquake fault rupture. We had to sever these physical ties one by one, and then separate the house into two pieces!

It takes an enormous amount of energy and willpower to sever all those ties, plus the many legal ties, that were layered like 100 years’ worth of cobwebs. We severed the second-floor studs from the soleplate and lifted the top half, with attic roof attached, off the bottom half. And after the home was separated, I spent many sleepless nights thinking about a divided house suspended 25 feet in the air, balancing on four stacks of cribbing, only a stone’s throw from the Hayward fault.

Like a Gulliver giant playing with a Lilliputian town, our housemover lifted the cottage up in the air on two steel girders, lowered each section down, and rolled them clear across town. Seeing a house rolling down the familiar streets of your town gives you a new perspective on how sturdy old houses are, and how worthwhile it is to save them. It also gives you a new sense of what’s possible when you’ve got a good housemover, the will and support of your community, and streets wide enough to move houses through!

We brought the two pieces of the cottage back together on a new foundation in south Berkeley. We saved many of the steam radiators left behind by the university and converted them to hot-water hydronic heating. Now, after 70 years as a decaying gray office building covered in conduit and office fixtures—and three years of restoration—the old redwood beams, wainscoting, and trim are shining, and it's a home again.