BY DEBORAH LASTOWKA and HEATHER HEAD
WEB ONLY

This online-only article is a supplement to the March/April 2016 print edition of Home Energy Magazine.
SHARE
Click here to read more articles about Weatherization

The idea of using step-by-step descriptions to help workers understand what's needed to achieve a desired outcome is common in the fast-food industry—but applying this approach to weatherization requires some creative thinking. Clearly, building a double cheeseburger and properly sealing can lights from the attic require completely different skills, but there is a similarity: Both have right and wrong outcomes that can be depicted.

That’s the concept behind an enhancement to the Standard Work Specifications (SWS) Home Energy Upgrades Online Tool, which allows states to produce step-by-step weatherization field guides for their workers. The SWS were initially developed as part of DOE’s Guidelines for Home Energy Professionals project, or the Guidelines project for short. The Guidelines project was designed to develop a high-quality workforce in the home performance industry. The project specifically includes the SWS, advanced professional certifications, and training accreditation. 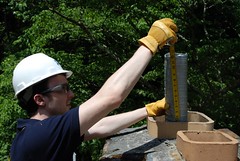 “The SWS were designed so that we would all have a common understanding of what quality work is across the country,” says Chris Baker, former training manager for the Southwest Building Science Training Center. I “It’s not opinion anymore; it’s a shared definition of what the finished work should look like.”
The SWS were not just created as a hypothetical ideal. In 2015, DOE began requiring grantees in state weatherization programs to meet the quality outcomes defined in the SWS under its comprehensive Quality Work Plan (QWP). As part of this effort, grantees were required to develop field guides for their workers that were aligned with the SWS and that provided detailed instructions on how to install high-quality retrofit measures.

Josh Olsen, Technical Operations team lead for WAP, says that this requirement puts the resource into practical application and ensures that everyone is working from the same bank of knowledge. "The tool allows this dense resource to become very accessible," Olsen says. “It removes a lot of the interpretation and shows the worker exactly how the work should be done.”

While the new QWP requirement initially posed a challenge to the state agencies, which often struggle with reduced budgets and staff, a handful of key trainers in the field are credited with spearheading a collaborative approach to overcoming this obstacle, including Baker and his team. Baker was a member of the technical committee that helped develop the SWS, and he used this early access to create what he called critical details. These critical details, which were developed in collaboration with Advanced Energy Industries, Incorporated, were heavily based on the SWS and laid the groundwork for the Arizona, Nevada, and Navajo Nation field guides.

"The SWS contains an incredible amount of written information on individual home performance retrofit measures,” says Amanda Hatherly, director of Energy$mart Academy (NME$A) at Santa Fe Community College (SFCC), “but for those working in our field, text-based instructions can be problematic." Those at her training center at SFCC knew that the SWS presented a real opportunity to put workers on the correct path, but to do so, it would be necessary to present the SWS content in a visual format.

Leveraging some of the initial work done by Baker and his team, NME$A began creating illustrated step-by-step entries for 50 of the most basic SWS. The initial batch was well received, and other states expressed an interest in contributing to the development of further entries. Hatherly proposed an arrangement whereby other state weatherization programs would help fund this expanded project. Eventually, 26 states collaborated to develop illustrated step-by-step field guide entries using the SWS Online Tool and its Field Guide Template. To date, over 350 details for single-family construction and over 200 details for manufactured-housing construction have been illustrated through this collaborative effort.

“The addition of illustrated steps really makes a difference to workers in the field," says Hatherly. Using the Field Guide Template produced benefits that would not have been possible without the collaboration of the network. "We’ve definitely accomplished more by working together than if we’d all tried to do this on our own."

And this coordinated effort has led directly to better work. "What I noticed was a distinct improvement in work quality," says Troy Cucchiara, who inspects fieldwork in his role as green initiatives manager with the New Mexico Mortgage Finance Authority. "This did seem to coincide with the distribution of the new guides."

The SWS Field Guide Template, which was developed by NREL and is based on the initial network collaboration, is now available to the industry at large through the SWS Online Tool. Registered users of the NREL website can gain access to the SWS Online Tool by sending an e-mail to workforce.guidelines@nrel.gov.

Chris Baker reports a similar experience. He says the new SWS-based visual field guides “work really well. Beforehand, we did have a few problem contractors, struggling with some of the required weatherization measures. We put this resource in their hands, which they were able to access via their phones and tablets, and now they’re doing perfect work.”

Rafael Ramirez, who does weatherization work in New Mexico, agrees. "When we have to reference the SWS, seeing the pictures is very useful." He adds that the guides also explain how the work can be done safely. "The guides make our job easier and faster, because all of the information is right in front of us.”
And Central New Mexico Housing Corporation crew leader Eulalio Vega says, "The field guide has helped my crew with weatherization measures when I have been unavailable to show them how to install something, or run the equipment. It has made my crew much more productive.”

“We do 4,000 jobs a year in Arizona, and the work we are seeing now is nearly flawless,” says Baker. “The only issues we ever see are contractors who have been doing this work for years and who assume they are doing it correctly . . . until they start failing inspections. Then we put the field guide in their hands, and they don't fail inspections anymore.”

Deborah Lastowka is a communications specialist at NREL. Heather Head is a project lead for NREL.