A version of this article appears in the Winter 2019 issue of Home Energy Magazine.
SHARE
Click here to read more articles about Weatherization

Occupying 80 acres of land just north of Lower Manhattan, Stuyvesant Town, and Peter Cooper Village is an 11,241-unit apartment community that is home to over 28,000 residents. It consists of two properties, bounded by First Avenue and the East River and extending from 14th Street to 23rd Street. The complex was originally conceived in the early 1940s as a place for veterans returning from World War II to call home. More than 70 years later, the complex has successfully adapted to meet the needs of the times. The past decade has been particularly transformative and noteworthy for the strategic emphasis placed on improving building performance. The 500-plus staff members have worked with Steven Winter Associates (SWA) to achieve the highest levels of energy and sustainability, all while housing a population that is the size of a small city. 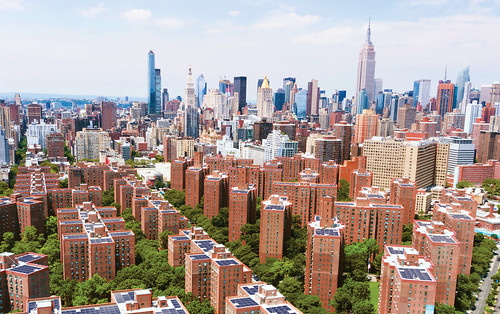 In 2014, the properties became the first and second to achieve EPA’s newly released Energy Star certification for existing multifamily buildings in New York State, and were one of the first five nationwide. To date, Stuyvesant Town/Peter Cooper Village is still the largest property to achieve this distinction. Earning less publicity, but of equal importance, is the ongoing effort by the properties to maintain building performance levels and certification from other organizations.

In 2018, Stuyvesant Town/Peter Cooper Village achieved certification under the newly released U. S. Green Building Council (USGBC) program LEED for Communities. The USGBC created LEED for Communities and LEED for Cities to support and celebrate large-scale, existing developments that exhibit continuous progress in creating a higher quality of life for their residents. The two properties represent the first privately owned buildings, as well as the first in New York State, to be certified—and they did so with a Platinum rating, the highest possible level within the LEED rating system.

This holistic approach employed in the new LEED program measures community performance across five different categories: Water, Waste, Transportation, Human Experience (quality of life factors) and, of course, Energy. The property reports key metrics for each category that highlight sustainability efforts, such as reduced carbon emissions per occupant or landfill waste diversion. To support these ongoing efforts, energy-saving and sustainability tips, such as recycling, composting, and water conservation, are provided to residents on the community’s website.

Here Are the Data

Underpinning these project achievements is the property’s annual data collection and reporting. For example, each year the operations team reviews its weather-normalized raw carbon emissions to track its progress in meeting its internal goals and those of the NYC Carbon Challenge. The Challenge is a voluntary leadership initiative and public-private partnership between the NYC Mayor’s Office and leaders in the private, institutional, and non-profit sectors who have committed to reduce their greenhouse gas emissions by 30% or more over ten years. To date, the property has achieved an 18% reduction across all residential carbon emissions. 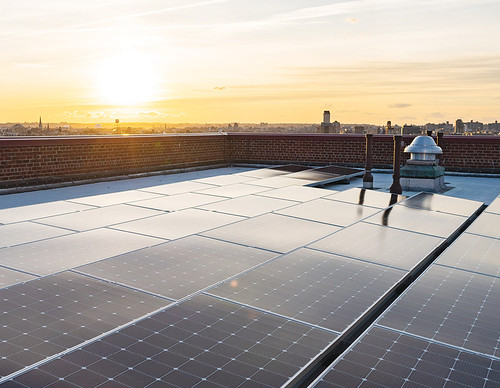 The building’s total of 22 acres of roof area make up the largest private multifamily solar PV array in the United States. The 3.8megawatt (MW) system is expected to provide 6% of the electricity used at the property, roughly double Manhattan’s total solar-generation capacity. (Courtesy of Stuyvesant Town)

These accomplishments were achieved by a dedicated team committed to finding practical and cost-effective ways to meet its goals. The unique way in which energy is distributed across Stuyvesant Town/Peter Cooper Village has presented both challenges and opportunities to achieve the high level of sustainability desired.

Heating and domestic hot water (DHW) services are provided from multiple mechanical rooms located throughout the properties, each of which serves several buildings. Heat is provided by steam, as is common for buildings built in the 1940s. The configuration of the heating system is one known as metro steam, which is distinctly different from the one- and two-pipe systems typically installed in residential and commercial buildings.

The metro steam design was conceived to save money and metal during World War II and reduces the number of valves and steam traps required to provide heat to a large apartment building. A single pipe runs from the bottom of the building to the top. In some cases, including Stuyvesant Town/Peter Cooper Village, this pipe will be exposed in kitchens and bathrooms, providing heat to those spaces. Once it reaches the top of the building, the pipe snakes back down, connecting to a convector as it passes through each floor.

While this method minimizes required materials and reduces operational requirements, it eliminates independent temperature control for each space. To maintain comfort in the building with varying outdoor conditions, the system changes the temperature of the steam by creating subatmospheric conditions in the system, which allows operation similar to a hydronic hot water system. While this makes technical sense, it is very difficult to maintain even distribution of heat in these systems. When distribution is uneven set points are increased to maintain adequate temperature in the coldest parts of the building, while other parts of the building become too hot. Since there is no individual control at each radiator, residents typically open a window, which wastes energy. 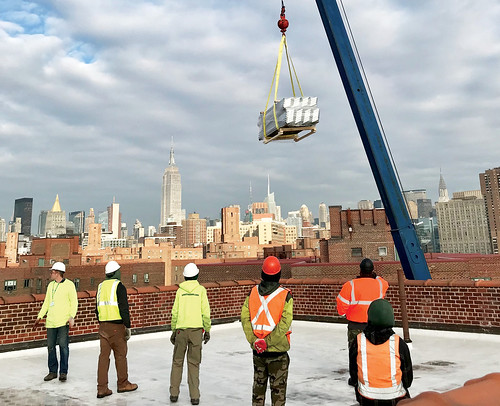 The team identified the imbalance and lack of heating control in the mid-2000s and embarked on a major heating-system upgrade to address this issue. A campus wide building automation system was installed to allow the operators to centrally control and monitor the complex.

Temperature sensors in apartments at high, mid-, and low levels on each vertical line to provide feedback to the system in order to regulate heat. It also installed control valves at the start of each vertical section of piping that runs from the bottom to the top of the building, so that any given riser can be turned on and off individually, which improved the zoning of the system. The installation of this control system resulted in a 19% reduction in heating use based on weather normalized utility data.

In parallel with the installation of the heating system controls, an energy audit was performed to identify additional opportunities to reduce energy consumption. The team identified a number of potential projects that could be undertaken, many of which the property has implemented over the past decade.

One of the more-interesting projects that have been completed relates to the control of passive-ventilation openings. The original design for the buildings provided natural ventilation to a majority of the spaces. In the public corridors, a vertical shaft runs from the ground floor to the roof with louvers on each floor. In practice, this created a chimney that greatly increased air infiltration from stack effect, resulting in energy waste. In fact, the buildup of pressure as air attempted to enter the base of the building was so great that it was hard to open and close the front doors.

To minimize the impact on energy use due to these vertical shafts while maintaining indoor air quality, centrally controlled dampers were installed at the top of each shaft. As the weather gets colder, the total free area is minimized, which reduces air infiltration. Other envelope penetrations and openings have been minimized over time, resulting in decreased energy consumption. 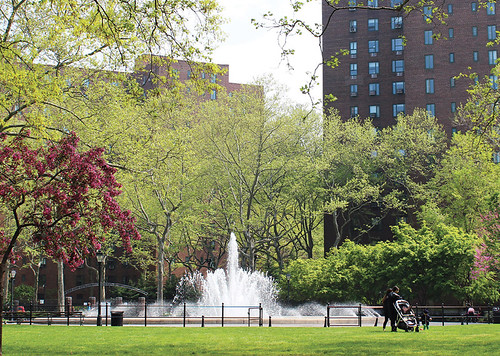 Occupying 80 acres of land just north of Lower Manhattan, Stuyvesant Town, and Peter Cooper Village is an 11,241-unit apartment community that is home to over 28,000 residents. (Courtesy of Stuyvesant Town)

The property uses steam provided by the local utility to deliver heating and DHW services. This district steam grid, operated by Consolidated Edison Company of New York (Con Ed), is “the largest steam system in the United States, serving more than 3 million New Yorkers.” When the steam is consumed, hot condensate is formed and is returned to a central tank, where it sits until it is at a safe temperature to send back to the utility. Instead of sending this energy down the drain, the hot condensate is pumped from the storage tanks through a heat exchanger paired with the DHW. This heat recovery system allows Con Ed to extract more energy from each unit of steam entering the property and reduces the amount of steam used to heat DHW, particularly in the winter, when heating loads are higher than hot water.

All interior common areas and exterior lighting were recently converted to LEDs. Over the course of the project, more than 13,400 light fixtures were upgraded. The property also installs LED lights in apartments as they are being renovated and encourages residents to swap out existing incandescent and compact fluorescent lamps.

On-site electricity use has been further reduced since the property utilized its 22 acres of roof area to install the largest private multifamily solar PV array in the United States. The 3.8 megawatt (MW) system is expected to provide 6% of the electricity used at the property, will roughly double Manhattan’s total solar-generation capacity, and was completed in 2019. 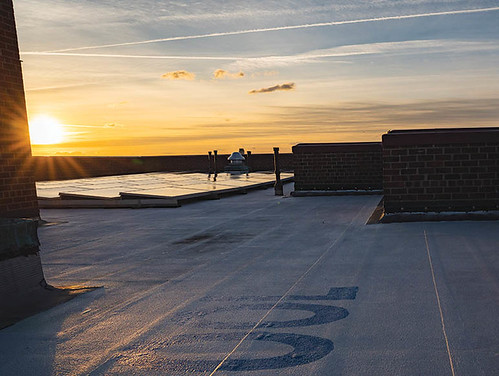 In addition to the work that has currently been done on the buildings, Stuyvesant Town/Peter Cooper Village is exploring innovative ways to reduce energy use and carbon emissions—installing air-to-water heat pumps for DHW, promoting smart and connected-community solutions, supporting additional electrical demand-response initiatives, and more. (Courtesy of Stuyvesant Town)

The current energy-related project that the team at Stuyvesant Town/Peter Cooper Village is undertaking is the construction of a 2-plus MW cogeneration facility that will provide it with on-site electrical and thermal generation. Cogeneration, alternatively known as combined heat and power, operates on the principle that it is more efficient and cost-effective to generate power on-site if both the electrical and the thermal energy can be consumed in the building. A gas-driven engine is connected to a generator, which creates electricity. Thermal energy is recovered from the engine through a heat exchanger that can create hot water and steam from the exhaust or from the engine itself.

More info on Con Ed’s claim to be the largest steam system in the country.

Completing even one of these projects across a community with such a large population would be laudable, and the team is showing no sign of slowing down. Moving forward, it is exploring other innovative ways to reduce energy use and carbon emissions. These include installing air-to-water heat pumps for DHW, promoting smart and connected-community solutions, supporting additional electrical demand-response initiatives, and more. The multitude of successful projects achieved during the last decade, along with those that will take place in the future, are a testament to the community’s “ongoing commitment to green living, including making it easy for residents to do their part.”

Eric Skiba is a senior buildings systems engineer at Steven Winter Associates, Incorporated. Since 2006, Steven Winter Associates, Incorporated has been working with Stuyvesant Town/Peter Cooper Village and its dedicated partners to reduce energy and carbon while promoting sustainability. The team has conducted energy audits, benchmarking, retro-commissioning, and sustainability program certification.