Ohmconnect Gets Customers Involved in Demand-Response

BY MARIEL WOLFSON
WEB ONLY

This online-only article is a supplement to the September/October 2015 print edition of Home Energy Magazine.
SHARE
Click here to read more articles about Trends

The year 1973 was an important one in the history of energy efficiency. Due to the OPEC oil embargo, heating fuel was scarce and costly. President Nixon asked all Americans to lower their thermostats to 68°F, and homeowners looked for ways to control their energy bills by insulating their homes and adopting a new ethic of conservation. Whether for financial, political, or environmental reasons, waste was out and thrift was in. A memorable cartoon in Time magazine showed Uncle Sam ordering Americans: “I want YOU to lower your thermostat!”

In the 40-plus years since the first major U.S. energy crisis, changes in technology, design, and policy have improved the energy efficiency of commercial buildings and homes. But we’ve retained the fundamental idea of homes and their occupants as consumers of energy.

Ohmconnect wants to change this. The California-based startup (whose name refers to a unit of electrical resistance) is initiating a quiet paradigm shift in the way we see and use our homes. It is currently the only program that makes possible direct residential participation in demand-response. Cofounder Curtis Tongue explains that homes “are still stuck in a uni-directional relationship with the grid; i.e., they create demand.” Despite California’s heavy investment in smart meters, this technology has produced little tangible benefit for residential energy customers. But, says Tongue, “homes can respond in a truly intelligent way to the real-time needs of the grid,” and Ohmconnect has been building a platform to make this a reality. 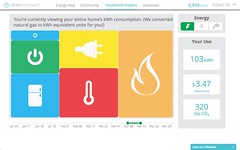 Ohmconnect users can view how their home has consumed energy over any time period. (Ohmconnect) 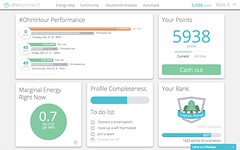 Dashboard: Users can review OhmHour performance and see how to improve. (Ohmconnect) 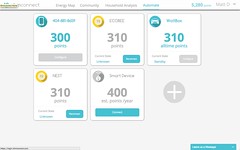 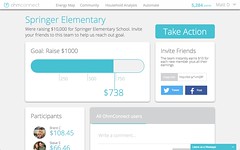 Entire communities can donate their earnings as an easy way to fundraise. (Ohmconnect) 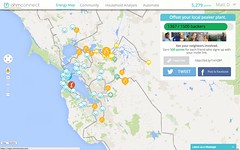 Here’s how it works. When customers sign up, their utility account provides Ohmconnect with their historical smart meter data. This establishes their baseline energy consumption and allows Ohmconnect to forecast their future usage. When wholesale electricity prices have spiked (for example, from about $40/MWh to $1,000/MWh), Ohmconnect notifies customers via text alerts to reduce their consumption. This notification to reduce electricity use is called an Ohmhour. In California, reductions below the forecasted baseline are considered energy generations or new-found power. These load reductions are sold, and the proceeds are passed back to the users through a PayPal or Venmo account. The benefits are more than financial, since the power plants used during times of peak demand (peaker plants) may be especially polluting.

Ohmconnect’s model differs from typical utility-sponsored demand-response programs, which ask customers to reduce their energy use on only a handful of occasions per year, usually on extremely hot summer days. Because Ohmconnect can declare an Ohmhour at times of its own strategic choosing, the financial and environmental advantages are greater: Customers get more chances to reduce their use of costly and polluting peaker plants.

Ohmconnect has also gamified users’ participation in the program. Gamification is an emerging trend in energy and other industries, and refers to the practice of making an action more gamelike (with rewards and competition) in order to encourage people to do it. Ohmconnect’s basic reward mechanism is direct compensation: Reduce your use during an Ohmhour and get rewarded in cash. There are also weekly lotteries that offer a higher potential payoff. Ohmconnect has also been testing a loss aversion strategy: Accounts are preloaded with two weeks’ worth of points; nonparticipation in Ohmhours then results in loss of these points. So far, this has resulted in the highest rates of participation, although Ohmhour participation across all users is an impressive 65%. Social media are an increasingly important part of many energy games, and Ohmconnect is no exception. For example, users can share their results on Facebook and earn more rewards than they would if they had kept their data private. This is a way of using social norming to encourage the spread of energy-conserving behavior among friends. If you’ve ever received a utility bill that compares your household’s consumption to that of your neighbors, you’ve experienced your utility’s attempt at social norming.

Some Ohmconnect users have devised creative ways to put their savings toward a cause: They’ve pooled their rewards into a single account that benefits a school or other nonprofit organization. Interestingly, this option was not built into the original Ohmconnect platform, but rather evolved organically through users’ collaboration.

Ohmconnect’s users provide the best windows onto what the platform can do, and provide hints as to what it may make possible in the future. Danny ter Haar, a 48-year-old electronics engineer (and part-time organic beekeeper) who moved to Southern California from the Netherlands six years ago, came to Ohmconnect through the world of electric cars. In 2011 he bought the first Nissan Leaf in Ventura County. After three years, he replaced the Nissan with a rare electric vehicle, a Toyota RAV4 with Tesla electric parts. He loved it and bought one for his wife as well. With two EVs needing charging, Danny looked for options and discovered a pilot program (through Electric Motor Werks and Ohmconnect) that would provide him with Electric Vehicle Supply Equipment (EVSE). But after joining Ohmconnect, says Danny, “I made a lot of changes in my house . . . I modified my current EVSE in such a way that my car stops charging during an Ohmhour event. I recently added some extra smart-home devices, which switch off my fridge in the kitchen and even some computers . . . That basically gets my whole-house usage to less than 100 watts when there is a pollution/demand event.” He has also linked his Ohmconnect account to a Nest thermostat and a Wink hub.

Steve Reed, a 50-year-old video game programmer, was already environmentally and energy conscious before he joined Ohmconnect. The San Diego home he shares with his wife and two teenagers has 8.3 kWh of solar panels, a high-efficiency heat pump/AC system, and all-LED lighting. He and his wife both drive electric vehicles. Because Steve’s house was already so efficient, Ohmconnect does not yet save him too much money (about $50–100 a year), but that was not his motivation in the first place. “We can’t do much more to reduce our total usage,” he says, “. . . but by making a few small changes we can still reduce the amount of pollution and CO2 produced on our behalf. . . with very little impact on our lives.” Steve has maximized the automation potential of Ohmconnect—his two EVs and his JuiceBox charger are registered so that they do not charge during Ohmhours. Ohmconnect is constantly adding devices that can integrate with its platform, and as of April 2015 Steve can also connect his Lennox iComfort smart thermostat and his Insteon hub to his Ohmconnect account.

Ohmconnect’s cofounders, Matt Duesterberg and Curtis Tongue, have found that automation is highly valued among their customers. Experts debate the relative impacts of behavior change versus automation when it comes to improving residential energy efficiency; Ohmconnect shows that the two can be mutually reinforcing. Its behavioral strategies—whether loss aversion, personal savings, or fundraising—provide incentives to participate in Ohmhours, but many users automate their homes to maximize their total number of points available. In fact, reports Curtis Tongue, “users have been driving the expansion of Ohmconnect’s ‘compatible devices list’ by requesting new integrations such as the Tesla Model S, Wink Pivot Genius, and more.” The explosion of the Internet of Things, in which devices can communicate with each other, as well as share and respond to real-time data, creates the possibility of homes responding to the grid in newly intelligent ways, and truly reshaping and redirecting energy demand.

But what about all of the homes without Wi-Fi thermostats or other smart devices? Ohmconnect proposes that these devices be distributed for free, as they hold significant potential for increasing the value each residence has to the grid.

See an interesting and related article, “California Could Rewrite the Rules for Distributed Demand Response.”

We already know that many older American homes—for reasons of design, weatherization, insulation, appliances, lighting, and more—are not nearly as energy efficient as they could be. We know what it takes to make them tighter, warmer, cooler, and cleaner. But what would it take—and what would it achieve, economically and environmentally—if we also made them smarter?

Ohmconnect highlights the potential of the smart home to shift energy demand in a cleaner and cheaper direction. The more homes that can participate, the greater the chance of eliminating peaker plant usage. The digital divide refers to the gap between those who have access to computers and the Internet and those who do not. The latter may be poor, rural, elderly, handicapped, or otherwise disadvantaged. As the Internet of Things becomes ever wider and more powerful, it is likely to play a greater role in how our homes either conserve or waste energy, and perhaps in how well they keep us safe and comfortable. The rise of the smart home may, or may not, extend the reach and implications of the digital divide. With this in mind, Ohmconnect is currently exploring a collaboration with energy efficiency retrofitters, who could help make homes smarter as an integrated part of their projects.

Mariel Wolfson is a freelance writer focusing on energy and environment. She recently completed a PhD at Harvard University with a dissertation on the history of energy-efficient and healthy housing in the United States.