Editorial: Learning Applied Building Science is Still Hard to Do

A version of this article appears in the July/August 2014 issue of Home Energy Magazine.
SHARE
Click here to read more articles about Editorials

As part of Home Energy’s 30th birthday celebration, we are pleased to reprint a 1994 article by Michael Uniacke describing the way he taught building science in a community college (see the article here). Mastering the intricacies of the building science related to energy performance is no easier today than it was 20 years ago, but sadly, neither is finding a good place to learn it.

Uniacke’s 1994 article is still right on with respect to the curriculum. His approach easily accommodates new technologies, materials, and methods. I particularly like the way he emphasizes hands-on exposure to both things (such as construction details) and needs (such as occupant hypersensitivity). Uniacke proposes placing building science courses in community colleges. This proposal still makes sense, because community colleges can provide a unique perspective on local building designs, climate features, codes, and utility programs. Of course, the private sector, federal and local governments, and utilities have played a vital role in training the home performance workforce and I imagine that they will continue to do so.

The building science of energy efficiency has naturally evolved over 20 years. One big change: the routine inclusion of solar-energy technologies (usually PV). This means learning new theory and new principles and gaining new forms of practical experience. This in turn helps building performance experts teach the integration of efficiency and solar—and to meet the demanding goal of achieving net zero energy homes (and especially zero energy).

Half of the home performance job is doing it right, but the other three-quarters is maintaining a viable business that will be around to do the next job. Uniacke didn’t cover that aspect of building science—though many articles in Home Energy have done so. The business aspects of building science are also inherently local, because they are influenced by policies and regulations established by communities, utilities, and states. The community colleges could play a role here, too, by offering classes about starting and growing a successful home performance business. 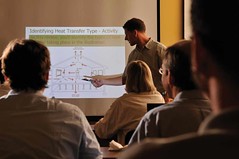 People complain about the lack of programs that train contractors to apply building science to improve efficiency, comfort, and materials. But the other side of the coin is the lack of customers willing to spend extra money for higher-quality services. It seems as though customers as well as contractors need to be better educated.

The situation could be worse: Our problems are much less daunting than those faced by China. Chinese officials now realize that a massive building performance upgrade will be necessary in order to reduce coal consumption and restore the environment to at least survivable levels. That translates into hundreds of millions of retrofits on an improbably short time scale. There’s no community college system to train this workforce in the necessary building science—but I imagine there soon will be.

Let’s face it, there’s nothing electrifying about discussing building science education—in the United States, in China, or anywhere else. It wasn’t sexy 20 years ago and it’s not sexy now. On the other hand, how often have you found yourself mentoring newcomers while thinking that they should have learned more in a real class—rather than learning just enough to solve the problem at hand?