A version of this article appears in the March/April 2015 issue of Home Energy Magazine.
SHARE
Click here to read more articles about The Back Porch

Tom White: How does carbon monoxide (CO) compare to other flue gases that we should be concerned about in homes?

Vi Rapp: CO is the biggest health concern because it can result in death very rapidly, and it can do so without the occupants knowing it—it’s the silent killer. CO isn’t the only concern we have, especially in terms of acute or chronic cases where people are exposed over an hour or longer. We definitely are concerned about nitrogen oxides, a respiratory irritant; and particulate matter, which can also result in lung cancer; and ultra-fines, which can cross the blood-brain barrier and cause even more damage. And then, of course, we also worry about moisture problems, which is a product of combustion, resulting in mold and other moisture-related issues.

Vi Rapp
is a research scientist working in the Environmental Energy Technologies Division at Lawrence Berkeley National Lab (LBNL). She holds a Ph.D. in Mechanical Engineering from the University of California, Berkeley.

TW: Is it still common for space heaters to be installed and vented into the living area?

VR: I don’t do home inspections but from what I understand they are still common, although there are countries that have banned them. I think all of Canada has said they are illegal. If you want to see which states have regulations on them you can go to ventfree.org. It’s definitely still a problem.

TW: What is sublethal verses lethal exposure? Or, what are the parts per million (ppm) limits?

VR: What the occupant actually experiences is going to depend highly on how air is moved through the home, as well as how big the home is. Typically when we look at exposure we look at what the ambient concentrations are, so maybe what a carbon monoxide alarm would measure. For those kind of measurements, we know that the EPA and other organizations limit exposure to 25 ppm for an hour and 9 ppm for an eight-hour period. That’s what they call acute exposure, addressing the most sensitive individuals in a population, which could result in maybe a headache or feeling dizzy. 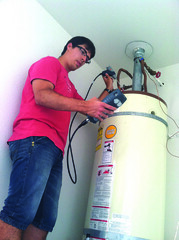 A student collects CO data from a water heater, an appliance that’s less likely to result in an IAQ hazard than others because they are typically operated for short periods of time. (LNBL)

As we move higher, we find that about 100 ppm can, for one to three hours of exposure, result in a headache, and at 400 ppm you are definitely into the life-threatening area where you are probably nauseous and vomiting. At 800 ppm, an exposure of two hours would definitely result in death. The exposure not only depends on dilution but also depends on the individual and how sensitive they are. If you have a child in the home or have someone that has asthma, they can be much more sensitive to those pollutants.

VR: A few of my colleagues at LBNL have done a lot of studies of pollutants from cooking (see “Kitchen Ventilation”). As for combustion safety, those investigations came from building professionals and contractors complaining that they were doing combustion testing protocols, but they didn’t know if they were truly protecting occupants. When they left the home, they didn’t know if they were doing no harm; they didn’t feel like the test gave them that warm, fuzzy feeling that they would leave the occupants safe. When that got brought to our attention, we started looking into it and investigating it to help address their concerns and needs. Our goal at LBNL is to help BPI, RESNET, Energy Upgrade California, and other institutions develop a test that will keep occupants safe and give that feeling for the building professionals that they did the right thing and they are doing what they can to mitigate the risk.

TW: What other advice do you have?

VR: Use a range hood, get rid of unvented combustion appliances, and when you’re inspecting homes, check that the vents aren’t blocked, and the flue carbon monoxide is low (the burner is operating properly), and that the appliance flues and venting are connected and not damaged. Checking those things will significantly reduce your risk.