BY ERIC MARTIN and KAREN SUTHERLAND
WEB ONLY

This online-only article is a supplement to the Spring 2017 print edition of Home Energy Magazine.
SHARE
Click here to read more articles about Hot Water

The Building America Partnership for Improved Residential Construction, led by the Florida Solar Energy Center, investigated the effect of ducted and interior-located heat pump water heaters (HPWHs) on space-conditioning energy use and water-heating energy use in a study conducted in Brevard County, Florida during 2013-2015. A growing volume of research shows that HPWHs have the potential to save significantly more site and source energy than other electric-storage water-heating options, but little research has been done to meter potential positive / negative impact on space conditioning energy.

In an earlier study that began in 2012, we replaced electric-resistance storage water heaters with HPWHs in eight central Florida homes. Comparison of one-year pre- and postretrofit hot-water energy use showed 68.5% (5.3 kWh per day) submetered savings. Not only do HPWHs heat water efficiently, but they create cool air as a byproduct, which could be used to supplement space cooling. However, common practice in Florida is to locate water heaters in attached garages.

All the HPWHs were installed and/or ducted between July and October 2014, and left in their default hybrid operation modes. For most sites, data for the period July 2013–July 2015 were analyzed in order to include both heating and cooling seasons, pre-and post-retrofit. For sites 1, 13, and 51, the preretrofit period was shorter, because other HVAC installation measures could potentially have confounded the data, and because there were limited preretrofit data for space-heating analysis.

To identify heating and cooling days, we determined heating and cooling balance point temperatures for each site by plotting daily average space-conditioning energy use versus daily average outdoor temperature. Regression analysis was then performed to determine space-conditioning energy savings. We used the difference between average daily indoor and outdoor temperature in the cooling regressions, as it normalized differences in average indoor temperature between pre- and postretrofit periods, which exceeded 1°F in some houses. Another reason the temperature difference was used is because operation of the ducted HPWH could alter the interior temperature profile. Cooling results are shown in Table 1, with median savings of 1.1 kWh per day (8.2%). 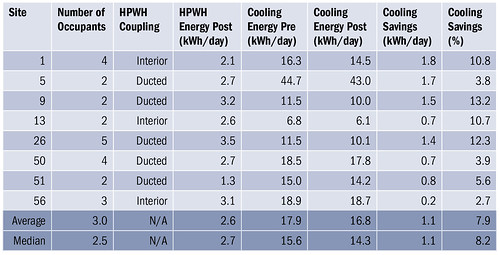 Figure 1 shows the postretrofit composite average day’s water-heating power for the four sites with the greatest cooling energy savings. Sites 9, 13, and 26 display both a morning and an evening (bimodal) hot-water energy use peak, with the evening peak dominating for sites 13 and 26. Site 1 peaks in the middle of the day, with some evening operation. It is possible that late-day HPWH operation occurring at these sites provides beneficial cooling as the house recovers from the load imposed during the hottest part of the day, when cooling is needed most. 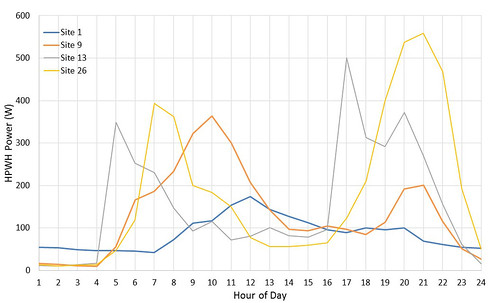 In Table 1, sites 5, 50, 51, and 56 show lower cooling savings. Regression lines for these sites show savings at low Delta T, but converge at Delta Ts between 2°F and 4°F. Examining hourly water-heating power for these sites (not shown) reveals that sites 5, 50, and 51 exhibit peak HPWH power consumption in the early morning hours, with little daytime and evening operation. It is likely that during the morning, when outdoor temperatures are cooler and less demand is placed on the cooling system, extra cooling provided by a coupled HPWH is less beneficial. This is because the HPWH exhaust depresses space temperature below the thermostat set point, but without energy savings. 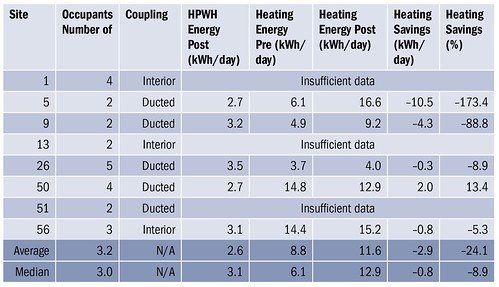 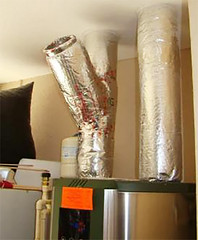 Ducting arrangement at site 5 allowing cold exhaust air to be diverted from the conditioned living environment if the house became too cold during the winter.

As expected, coupling an HPWH to the conditioned space has a negative effect on space heating. However, the seasonal magnitude of the heating increase is rather small, as heating needs in central Florida are modest. Nonetheless, one way to counter this effect for a ducted HPWH is to install a damper system allowing cold HPWH exhaust air to be diverted from the conditioned space. Many of the ducted installations described in this article were installed with such a damper system, allowing the homeowner to act if the HPWH exhaust air made the room uncomfortably cold, but our findings indicate that none of the homeowners used the system.

Note that without a corresponding damper on the HPWH intake allowing air to be drawn from outside the conditioned space, some space depressurization could occur during HPWH operation if the HPWH exhaust is diverted away from the living space. The effects of this space depressurization on space-conditioning energy use are unknown.

We also investigated the effect of coupled HPWH retrofits on domestic hot water (DHW) energy use, again using data for the period July 2013–July 2015. As seen in Table 3, the six sites receiving coupled HPWHs as replacements for electric-resistance tanks had a median savings of 53.3% in DHW energy. 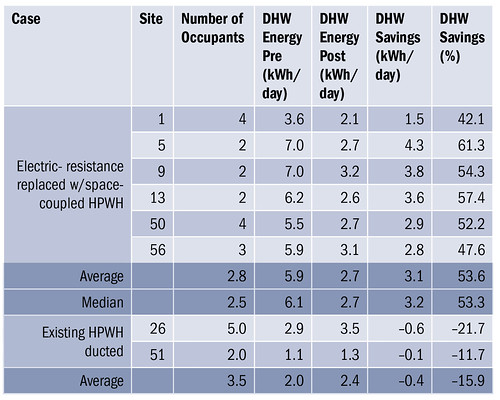 Two sites (26 and 51) had a HPWH for more than one year before being ducted, and as expected these sites showed slight increases in DHW energy use after the HPWHs were coupled to the conditioned space (0.4 kWh per day). This study estimates that the coupling reduced potential DHW energy savings from a garage-located HPWH by 10.6% (0.4/3.6 kWh per day, where 3.6 = 3.2 kWh per day saving for electric-resistance replacements + 0.4 kWh per day loss for existing ductwork). In Florida, using garage air as a heat source is beneficial for HPWH water-heating operation because garage temperatures are high for much of the year. Changing to a room temperature heat source can be expected to reduce water-heating efficiency. Also, airflow restrictions introduced by the ductwork result in lower efficiency.

Download the full report, upon which this summary is based, including results of corresponding lab experiments and references.

This field study estimates that coupling a HPWH with the conditioned space increases HPWH energy use by 16% (0.4 kWh per day); and that replacing a garage-located electric-resistance tank with a coupled HPWH would generate 10.6% less in DHW savings than replacing the electric-resistance tank with an uncoupled HPWH. Cost to install the ducting as described in this article, inclusive of materials and labor, was $620 per site. At this cost, the coupling would not be cost-effective because net savings would be only $33/year ($49/year cooling savings minus $16/year heating penalty). The simple payback period of 18 years exceeds the expected life of the equipment. Cost effectiveness improves if a damper system diverting cold exhaust air from the conditioned space during winter reduced the energy used for space heating. There is, however, a small net benefit to installing an HPWH in a location inside the conditioned space, where ductwork would not be needed.