Who benefits from all this upward-shining light? Maybe a few alien beings.

A version of this article appears in the November/December 2014 issue of Home Energy Magazine.
SHARE
Click here to read more articles about Kitchen

You have probably seen those amazing images of the world at night as observed from space—hundreds of times. Below is one photo, but many others show expanded views of smaller areas. I still marvel at how those necklaces of light show the shapes of our cities. The lights tell stories, too. For example, the Korean peninsula appears surgically sliced at the Demilitarized Zone, thanks to South Korea’s intense illumination and the darkness of North Korea. But only recently did I consider these images from a completely different perspective: All of this light is waste!

Who benefits from all this upward-shining light? Nobody really. It provides a stunning view of an otherwise dark Earth to astronauts, airplane passengers—if you are lucky enough to get a window seat—and perhaps a few aliens. But for those of us on the surface, this illumination mostly consists of light fixtures pointed upward toward space, providing little benefit. It corresponds perfectly to leaving windows open while you heat or cool the house—which we all know accomplishes little—only this kind of waste is visible. Wasted light is also a kind of pollution for everyone, and for astronomers in particular. They have struggled to create dark-sky preserves near observatories to prevent artificial light from interfering with their observations. More generally, wasted light compromises people’s ability to see when they are walking, driving, or pursuing any outdoor nighttime activity.

These images got me thinking that a bright city, as viewed from space, is a wasteful city. Perhaps we should make a goal of creating brighter cities where (and when) we need illumination but dimmer cities as viewed from space. The smarter the city, the less visible it would be from space—quite the opposite of our current notion of “progress.” The residential sector is not the largest contributor of upward-shining light—cars, street lights, and commercial lighting contribute much more—but many, many homes are visible from the night sky. 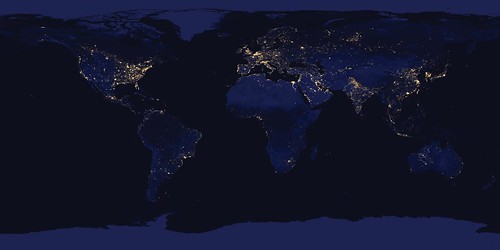 It was a complaint from my uphill neighbor that made me realize that I too was illuminating outer space. I had recently installed a Solatube in my house. It does a wonderful job of piping sunlight from my roof down into a windowless room. It comes with a built-in CFL for operation at night. Unfortunately, at night the CFL shines half of its light up the tube to the outside! That realization launched me into an obsessive hunt to reduce upward-shining light. I immediately installed a separate room light (so that only reflected light leaked back up through the Solatube). I also retargeted my outdoor lights and realigned the motion sensors to capture movements closer to my home. My home is now brighter inside but dimmer to those aliens. I may have saved a little electricity, too.