BY KAREN SUTHERLAND, ERIC MARTIN and DANNY PARKER
WEB ONLY

This online-only article is a supplement to the Summer 2017 print edition of Home Energy Magazine.
SHARE
Click here to read more articles about Kitchen

The study consisted of 56 homes, eight of which received a HPCD retrofit during the course of the study. In a subsample consisting of 45 homes that did not receive a dryer retrofit during 2013, existing electric-resistance clothes dryers were found to account for 3% or 741 kWh per year of annual energy consumption. A second subsample of 53 homes included 8 higher-use homes that received the energy-efficient dryer retrofit described above near the end of 2013. The 2013 average for this subsample of 53 homes was 814 kWh per year. These end-use findings are a little lower than those reported in older studies, but they reflect the effect of improved clothes washer energy efficiency on clothes dryers, as the clothes washers remove more moisture from the load before it is placed in the dryer.

Figure 1 shows the average-day dryer demand profile for the 45 non- dryer altered homes for 2013, along with plots for select months. Each data point represents the average hourly dryer power for all homes, taken from one-minute measurements and then averaged for every day in the period resulting in the diversified appliance electrical demand. While individual electric-resistance dryers use about 5 kW while operating, data points in Figure 1 represent an average demand for all measured dryers for the hour. In many cases, dryers are not operating in a given hour, and the diversified demand includes averages both for those in use and for those not in use. As Figure 1 shows, maximum dryer energy demand occurs around noon, with a broad demand between 8 am and 8 pm. There is little monthly variation from the annual average. This finding is consistent with that of an earlier large-scale study (Pratt 1989). Significant use occurs during utility summer afternoon and winter morning peaks, and Figure 2 shows that weekend use is nearly double use on weekdays. 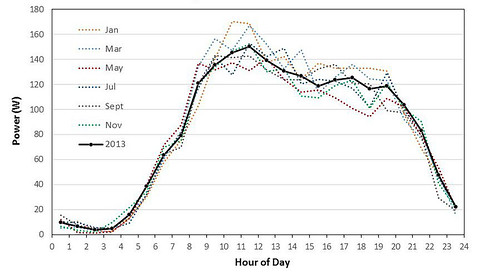 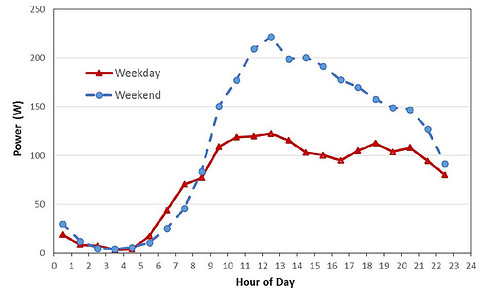 In 2015, in order to explore the potential for dryer energy savings, electric-resistance clothes dryers were replaced with new Whirlpool HPCDs in eight homes. This unvented condensing dryer model (WED99HED), with an energy factor of 3.71 lb/kWh, is designed to be approximately 40% more efficient than standard units; it received Energy Star’s 2014 Emerging Technology Award. The dryers were matched with a high-efficiency Whirlpool clothes washer.

The Whirlpool HPCDs and matched clothes washers were installed in May and June 2015. and homeowners were provided with instructions on efficient operation. Seven of the homes had conventional existing clothes washers and dryers, which were replaced by the efficient Whirlpool models. The eighth home (site 19) had been involved in an earlier part of the study that included testing of the Samsung DV457 efficient resistance clothes dryer. Significantly, the occupants of this home do a very large volume of laundry, with baseline dryer energy use (before the Samsung was installed) of 9–10 kWh per day (~3,500 kWh per year). The Samsung efficient resistance dryer was shown to reduce consumption by 26% at this home. It was hoped that replacing the Samsung unit with the new Whirlpool HPCD dryer would further reduce clothes-drying energy.

Table 1 shows the measured data in the pre- and postinstallation periods for each site. However, the savings level for clothes drying probably reflects not only the efficiency of the clothes dryer, but also that of the clothes washer in reducing the amount of moisture left in the clothes to be dried. We discuss this issue in the next section. 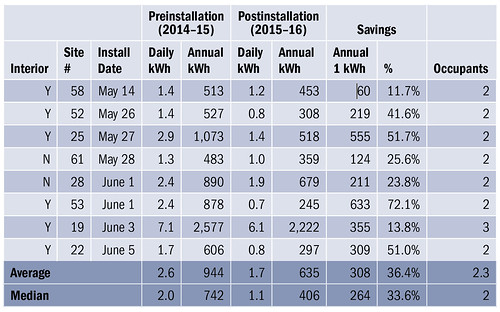 Median energy savings in the pilot demonstration were estimated at 264 kWh per year, or 34% of median baseline consumption, and average savings of 308 kWh per year, or 36%. Savings results at two sites are noteworthy. The savings for site 19 would be 27% if they were based on the baseline unit rather than on the more-efficient Samsung DV457 unit that was in operation in 2014, and the owners at site 58 refused to use the eco mode and instead chose the speed mode, which resulted in lower savings.

The impact of the HPCD on utility peak demand was also investigated. Figure 3 plots the average daily profile for seven of the eight HPCD sites preretrofit (2013) compared to postretrofit (May/June 2015– February 2016). While this plot consists of annual data, seasonal variation is limited as we explained above. Thus this plot provides good indication for the large potential demand reduction coincident with utility summer peak—the period in which demand for electrical power is highest–which typically falls between the hours of 4 and 5 pm. For the homes in this study, the HPCD generated a demand reduction in dryer energy of 0.09 kW, or 48%, between these hours. 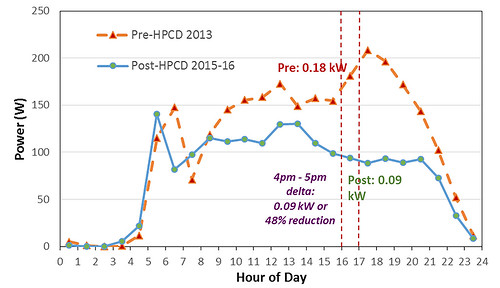 The new heat pump clothes dryers were installed together with a high-efficiency, front-loading WFW95HED washing machine with an integrated modified energy factor of 2.75. Washer energy use was measured for about 60 days pre- and postinstallation. The results suggest a median washer energy use savings of 38%, or 36 kWh, per year, but with wide variation among sites, including negative savings. In addition, this low-residual-moisture washing machine is designed to remove more moisture during its operation than typical models. Thus some of the energy use reduction measured with the new HPCD may be attributed to starting loads with less moisture content. To investigate the potential impact of the washing machine’s improved moisture removal on the HPCD energy savings, participants were asked to weigh their wet loads before being dried and again after the load was dried to satisfaction. Measurements were conducted on a target of at least ten loads for each evaluation period. The median pre- to post-retrofit reduction to field-measured residual moisture content (RMC) is estimated to be 9%, ranging from 5 to 20%.This represents a reduction in moisture level of material coming out of the washer of about 23% in the post condition. Results confirm that the new washing machine with superior residual moisture removal characteristics is responsible for some of the HPCD energy savings.

FSEC researchers calculated that the installed washer would save about 118 kWh per year (14%), and the installed dryer would save about 220 kWh per year (26%), compared to the typical appliances being replaced. It follows that about 35% of the measured dryer energy savings in this study are attributable to the improved washer water removal, and 65% are attributable to the heat pump clothes dryer itself.

With predicted median annual savings of 264 kWh ($32 at 0.12/kWh), outright replacement of existing models with the Whirlpool HPCD is not a cost-effective measure, given its full cost of $948. Additionally, some portion of the energy cost savings for the dryer is attributable to the low-residual-moisture washing machine, as we explained above. However, based on the assumption that consumers will purchase the HPCD only if they are in the market for a new dryer, economic evaluation should consider only the incremental cost for the HPCD. Supposing that a standard dryer costs about $700, the incremental cost of $248 will be paid back in about eight years with a 13% annual rate of return.

Arguably, the cost of the paired low-residual-moisture washer should be considered, which makes the economics of the HPCD measure appear less attractive. While market data suggest that consumers purchase matched washer-dryer pairs 50-55% of the time (DOE 2015), and a low-residual-moisture washer was paired with the HPCD in this project, the economics of replacing them both at once are difficult to project within this study. The energy savings during laundry washing must also be considered. As we explained above, washer energy measured for about 60 days pre- and postinstallation suggests median annual washer energy use savings of 38% or 36 kWh per year. Economics of the paired set would also need to account for water- heating energy cost savings, which was beyond the scope of the study.

During operation of the unvented HPCD, the condensed moisture from clothes is passed down a drain, and the waste heat from the heat pump and electric-resistance elements is released into the surrounding space. Although the amount of sensible heat released into the space from the nonventing HPCD was expected to be modest given the increased efficiency of the unit, this proved not to be the case. Although vented electric-resistance clothes dryers use about 40% more electric power than a HPCD, more than 95% of that heat is vented outside the home, as shown in detailed testing done by done by Ecova (Figure 1 in Bendt 2010). For the ventless HPCD clothes dryer, however, all of the energy used becomes heat that is released into the surrounding space. Evaluation results showed that a very significant quantity better to give actual amount of sensible heat was released—much more than the amount of heat released into the space from a conventional electric-resistance vented clothes dryer. At site 25, for example, pre-retrofit, the dry bulb temperature of the utility room during appliance operation rose from about 80°F to 83–84°F. However, post-HPCD dryer installation, the utility room dry bulb temperature frequently exceeded 95°F and nearly approached 100°F. Ambient moisture levels also varied somewhat, with slightly elevated room dew point temperatures coincidental with the room dry bulb temperature spikes associated with dryer operation.

The full report upon which this article is based is

A field test of unvented condensing HPCD showed energy savings were achieved in all eight homes evaluated. The estimated median energy savings were 34% (312 kWh per year or 0.92 kWh per day) for an average annual savings of 36% (346 kWh per year or 0.85 kWh per day). There were also sizeable energy demand reductions coincident with utility summer peak. Energy Star washing machines were installed along with the clothes dryer. The energy-efficient washing machines are probably removing more moisture from the laundry loads than the replaced washers, thus also contributing to these savings. The model installed in this study may be responsible for about 35% of the HPCD energy savings, given its improved moisture removal capability.

With a current available cost of $948, there is only a modest premium at the time of purchase for the HPCD compared with standard resistance dryers. With replacement at the end of appliance life, and incremental cost, the HPCD choice appears quite economical, depending on the cost of the standard model. However, these economics ignore HPCD energy savings that might be attributed to the paired low-residual-moisture washing machines.

Although the HPCD use less electricity than a standard resistance dryer, the unvented model tested released a significant amount of heat. It also added slightly greater moisture to the building interior during operation. The units that were located inside the home led to very high utility room temperatures and increases in cooling energy that may compromise identified dryer savings. Thus, these unvented clothes dryers appear to be appropriate in Florida only if they will be installed outside the conditioned space, typically in the garage.

It seems likely that vented HPCD technology is the superior solution in Florida, considering that many dryers are located inside the conditioned space. However, the condensing unvented clothes dryers may be a very attractive option in heating-dominated climates, particularly given reductions to infiltration-related air leakage.

Clothes dryers account for 6% of residential electricity consumption in the United States. Approximately 85% of U.S. households have a clothes dryer, and 6–7 million new dryers are sold every year. Clothes dryers consume as much ...