What Aerosol Taught Us About Compartmentalization

BY SEAN MAXWELL
WEB ONLY

This online-only article is a supplement to the May/June 2016 print edition of Home Energy Magazine.
SHARE
Click here to read more articles about Trends

Every once in a while in my previous job at Steven Winter and Associates I got to work on something very cool with the real experts—folks like Mark Modera and Curtis Harrington at UC Davis. They have been developing a potentially game-changing technology based on the use of aerosolized sealants to seal houses and apartments. It is similar in concept to Aeroseal technology and has been described in several magazines already, but in case you haven't seen it, here is a quick summary.

Using specialized nozzles and compressed air, a water-based sealant is atomized into particles small enough that they can be carried by light air currents. Sealant nozzles are placed throughout the space (a house for example), and using a standard blower door, the space is pressurized to up to 100 Pa. Air currents and pressure differences created by the blower door carry the sealant toward leaks in the building envelope. The sticky sealant particles catch on the edges of the leaks, and more particles stick to these, slowly building up over time. Eventually, the leaks are virtually completely sealed. The result is a relatively hands-off way to seal an apartment or house to extremely tight levels, without ever opening a tube of caulk.

Figure 1. Pressure measured inside a wall in relation to location of air barrier. 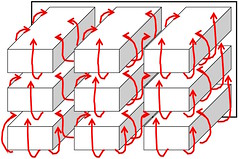 Figure 2. Very tight air barriers at the apartment interiors may leave leakage paths around these sealed “boxes within a box”. 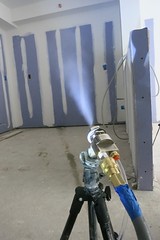 Using specialized nozzles and compressed air, a water-based sealant is atomized into particles small enough to be carried by light aircurrents. 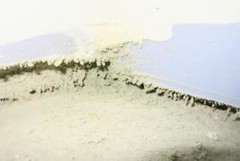 Here’s what the sealant particles look like when they collect near a joint at the bottom of a wall. 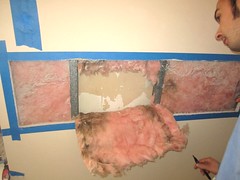 Dust patterns on the insulation indicate airflow through dead spaces between two fairly airtight walls, the old plastered masonry, and the newer framed wall built inside.

We were very excited to work with UC Davis in the summer of 2014 on a demonstration of this process in a Queens, New York, apartment building, and the results showed a dramatic ability to seal apartments in less than 90 minutes. Four apartments were sealed to less than 0.1 CFM50 per square foot of enclosure, or less than 2.1 ACH50. For projects that must meet apartment airtightness requirements, this process has the potential to virtually guarantee supertight apartments.

While there is plenty that can be said about this process and its effectiveness, we became interested in what it could teach us about apartment air barriers. So we deployed a bunch of manometers and watched what happened to the walls themselves while the sealing progressed.

If you know the pressure inside the wall, and you compare it to the pressure inside the apartment being tested, you can find out things about the air barriers that make up the wall. One is where the air barrier in the wall actually lies. If the apartment is pressurized to 100 Pa with respect to outside, and you measure the pressure in the wall itself, you can infer how tight the near and far surfaces of that wall are compared to each other. For example, if the near surface of the wall is very airtight, the pressure in the wall with respect to the outside will be relatively low (see Figure 1). This makes sense, because if there isn’t much air leaking into the wall cavity from the inside of the house, the wall cavity won’t be pressurized much.

But say the near surface of the wall is leaky compared to the far surface—for example, if some plumbing penetrations haven’t been sealed from the inside. If the leaks on the far side of the cavity are relatively small, air leaks into the wall, but it has nowhere to go. The pressure in the wall builds with respect to outside. The leakier the near surface is compared to the far surface, the closer the pressure in the cavity will be to the overall test pressure.

Mind you, this alone doesn’t tell you how much leakage there is in the wall; it just tells you where the leakage is, relatively speaking. To get a visceral understanding of this, imagine you are doing a blower door test on a house, and the house is at –50 Pa with respect to outside. Now imagine you are holding a cardboard box. Poke a manometer hose into the box, and you’ll notice a zero pressure difference in the box with respect to the apartment. That cavity (the box) is totally within the air barrier of the house.

Why You Should Care

You still might be inclined to ask why you should care—after all, this technique seems pretty esoteric. But it allowed us to ask and answer some interesting questions about the aerosol sealing process and compartmentalization in general. First, we found that the aerosol typically seals the first leak that it encounters—the near side of the wall cavity, for example. This wasn’t exactly a surprise, but monitoring the pressures allowed us to solidly confirm what we could see with our eyes. It also led us to some other questions about the nature of air leakage in multifamily buildings.

Sure, the aerosol could compartmentalize the units quickly and reliably, and we even found that it made ventilation systems work better. But would compartmentalized apartments mean lower energy bills? After all, if one could break a six-story building down into many smaller one-story compartments, wouldn’t the stack effect, and therefore energy use, be reduced? I don’t believe it as much as I had once hoped.

We once cut open walls in an old masonry hospital building that was converted to apartments to identify possible retrofits. The dust patterns on the insulation inside the walls were puzzling to me. The patterns indicated that air currents were traveling upward through the building walls, especially through channels like the steel studs, but blower door tests showed the apartments to be fairly well compartmentalized and airtight. Where was this vertical air travel coming from? I was naïve to think that an apartment blower door test would tell the whole story.

The aerosol process creates extremely airtight apartments, but as we found with the pressure monitoring, the air barriers are created on the innermost surface of the apartments. What about all the spaces between the apartments? Wall cavities can be complicated places, containing pipes, ducts, mechanical systems, and just plain dead space. If the aerosol seals only the innermost surface of these complicated spaces, these interstitial pathways—horizontal and vertical between floors—are mostly untouched. What you get is a bunch of airtight boxes (the apartments) nested within a larger box (the exterior envelope). Any airflow patterns in the nether regions of the building—the myriad chases, raceways, and rat paths—remain. See Figure 2.

Back to the converted hospital. The exterior walls of the old building, which were basically solid concrete and masonry, had been left untouched in the retrofit. I would expect this exterior air barrier to be actually pretty airtight. At some point in the 1970s when the building was converted to apartments, walls were built on the interior of the exterior masonry walls and insulated. Blower door tests showed that these walls created fairly airtight apartments. This is a good example of boxes within a box. When we tried to specify retrofits, we were disappointed when a measurement of apartment airtightness before and after injecting foam into various wall cavities showed almost no improvement. But in retrospect, this makes perfect sense. We were injecting foam into dead spaces—into the space between the boxes within a box. That wasn’t going to change the apartment airtightness, and probably not energy use either. Insulation in these walls showed ample evidence of air travel. How much windwashing of the insulation was going on? Sealing the apartments further wasn’t going to change that at all.

Read about the effectiveness of the aerosol process.

This has some bearing on our ability to claim energy savings from air sealing apartments in new construction and retrofit. Even if we were able to aerosol seal every apartment to virtually zero leakage, air would still flow through the building skin. Compartmentalization is an admirable goal, but extrapolating apartment airtightness—or even whole-building airtightness—directly to energy savings can be a tricky affair.