Passivhaus 101: Sustainable Architecture from the Inside Out

A version of this article appears in the Summer 2017 issue of Home Energy Magazine.
SHARE
Click here to read more articles about Passive House Approach

This article discusses the Passive House (PH) as an example for sustainable architecture. It defines what a PH house is as well as how it uses shading, ventilation, and solar power efficiently.

Originating from the efforts of German physicist Wolfgang Feist, the word Passivhaus, or Passive House, is a term that defines a building’s energy use for heating. For the purposes of this discussion, a PH is one that uses not over 15 kWh/m2/yr. Let’s look at an example.

In the wintertime, let’s say it is –15° Celsius with a flow of about 15 watts per hour per square meter of heat energy escaping the building. At –2° Celsius, around 7.5 watts per hour of energy loss would be expected.

At the same time, the building would have energy inputs—for instance, through heating, cooking, charging stations for computers, and not to be forgotten, the heat that human bodies emit. Every person constantly produces about 100 watts per hour. So if you have four persons, you have a constant production of about 400 watts. If we calculate the heat distribution in winter, we can bring the indoor temperature into balance with the outdoor temperature. 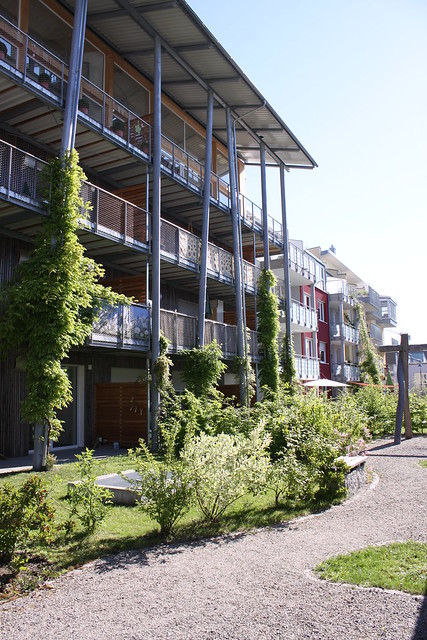 Integrating Plant Life into the Design

The big challenge is in the summertime, when the heat production inside the building remains constant. How can we cool it? For one, through plants!

Plants serve several functions. They create shade, and they have a relaxing effect on people. Most of us would agree that it is less relaxing to stare outside at a concrete slab parking lot than it is to gaze at green plants that give off the oxygen we need to breathe. Surrounding ourselves with plants in an urban environment helps us feel closer to nature 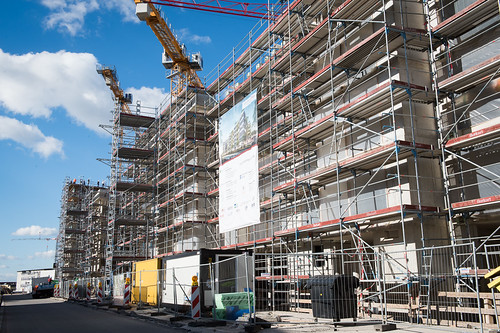 Plants emit moisture and oxygen. They filter light and absorb sound. All this creates a pleasant indoor environment, which boosts our well-being.

But above all, plants prevent overheating in the summertime. They do this by absorbing the sun’s rays, unlike concrete, which reflects the heat.

In 2012, the University of Freiburg and Frey Architekten conducted research to show how to ensure effective cooling in a PH. The tiny dotted line in Figure 1 represents the summertime indoor temperature in the test PH. which is notably more consistent than summertime indoor temperature in the other buildings measured, as represented by the other three lines. Another benefit of the shading effect of the plants and solar panels is temperature constancy. Regular, non-passive houses experience extreme temperature changes, especially during the summer months. 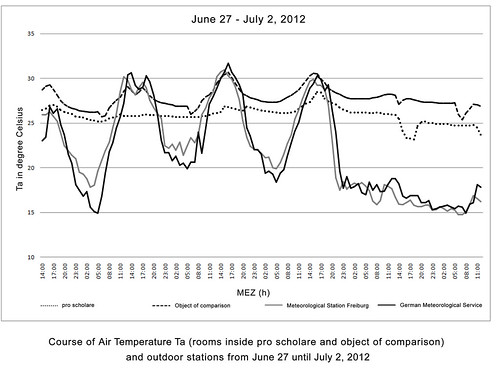 Figure 1. The course of air temperature is shown here comparing the rooms inside to the outdoors from June 27 to July 2, 2012. (Frey Architekten, Germany)

It requires a high level of conscious effort to focus on all the details when planning and constructing an energy-efficient building. It’s not just a matter of providing enough insulation. It’s about the painstaking work that goes into every detail—like adding trees to shade a home. The more diverse the structure, the more details you have to deal with. But that is the job of a qualified architect.

Ensuring a healthy environment in a PH requires closely monitoring air quality and providing for air circulation. To guarantee air quality in a PH despite the airtightness of the structure, it is necessary to monitor

An air exchange device is installed in every PH. This device is automatically activated when levels of humidity, toxins, or dust exceed a predetermined level. This ensures that air quality will remain optimal.

It is important to pay attention to all elements of the building to ensure that there are no thermal bridges. Balconies, for instance, could be placed on steel pilings that are attached to the external thermal insulation.

The interior surfaces of a room create a certain surface temperature. The better the insulation, the less heat gets trapped. The lower the thermal bridge, the less heat that gets transported.

Aside from the room’s air temperature, the surface temperature determines how the person perceives the temperature. The percentage of radiant heat is four times higher than the proportion of convection. Improving the surface temperature of the outer shell vastly reduces the need for heating the air temperature. When the thermal bridge and thermal insulation are optimized, it requires less air heating. Less air heating translates into lower heat performance. The air exchanger’s primary function is to improve the air quality and also reduces heating energy since the room isn’t flooded with cold air from outside.

A Multifamily PH Is Actually Easier to Build

It is actually easier to build a multifamily PH than it is to build a single-family PH. Our latest Heidelberg Village project, with 162 units, provides an example. This project was more economical to build than the same number of single-family PHs would have been. The reason is that the building surface of a multi-family house is smaller than that of single-family homes. Hence the heat loss is far smaller. 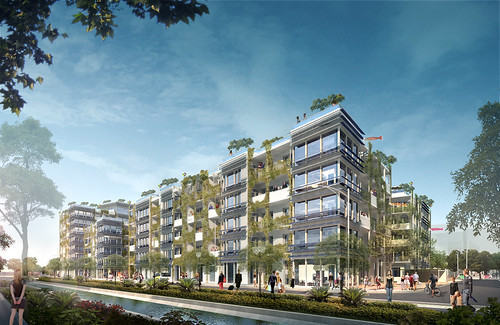 A rendering of the exterior of Heidelberg Village from the street. (Frey Architekten, Germany)

The reason is the volume-surface ratio. While it might seem that creating a single-family PH would be easier, multifamily homes have the same size roof to put solar panels on, so we installed solar panels on the façades as well, including the balconies. The solar panels not only produce energy and shading, they also act as guardrails. Because we can produce shade with the solar panels, they serve a dual purpose: energy production year-round and cooling in the summertime. Because the dwellings share walls with one another, we lose less heat and produce more energy by using every surface we can to generate it.

Creating these façades is difficult, because you have to make sure that you do not generate thermal bridging. But in the end, a bigger building has much less outer surface space in relation to the occupied space. The PHs does have a reputation for being a boring box. But as you can see from our Heidelberg Village project, it’s possible to create PH structures that are varied and interesting.

The biggest challenge for the project developer has been to integrate our residents into the planning process. We invite them into this process at an early stage, engaging them and asking them to take part in some of the planning. Often we get unusual demands. But that’s the most interesting part. Because the buildings we create are meant to house human beings, it is unimaginable not to ask them to participate in the planning. After all, it will be a place they call home— for a long time, we hope.

About a decade ago, it was common for PHs to be built without windows that could be opened. Now we use a combination of cross-ventilators with a cross-flow heat exchanger (for wintertime air exchange) and opening windows (for summertime air exchange). The resident gets to decide whether to open the window or press the button to activate the ventilator. As I explained above, we install solar panels on the façade as well as the rooftop, to maximize surface use. In addition to producing more energy, this reduces the loss of heating radiation in the winter and reduces overheating by sun radiation in the summer.

Here we need to differentiate between subtropical and Northern European climates. Ultimately, each climate has a specific set of heating and cooling needs. In Europe, the focus is on heating needs. 30 percent of the energy needed for heating is used for air circulation. That means without heat recycling through air exchange, a passive house would not be possible. We have discovered that ventilation with heat recycling is absolutely essential. It only works when the residents behave in a certain manner because you can waste energy even in a passive house when the residents are wasteful and live without a certain level of mindfulness. For that reason it is important for the residents to have environmentally friendly choices as to whether they can open a window when it is cold outside or turn the air ventilation on a higher setting without losing heat.

In subtropical areas we have two challenges: cooling and humidity. Just as with heating we need to pay more attention to the interior walls facing the outside and their surface temperatures. The higher the interior room’s surface temperature, the cooler the air must be to maintain a pleasant atmosphere indoors. The interior room’s surface temperature is high when the sun is shining on the façade. That means the façade must be shaded so that it does not overheat. Through the shading cooling the air is less needed. The lower cooling differential in the air means lower humidity. We have started including dehumidifiers in homes with subtropical humidity levels.

When it’s hot outside, humans use a vast amount of energy to combat the heat on the inside of buildings. Air conditioners are the most commonly used solution. However, these activities are in conflict with the idea of sustainability: We use, in the most literal sense, energy to fight solar energy. 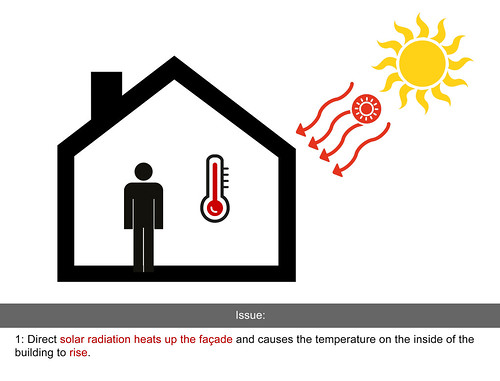 Figure 2. Direct solar radiation heats up the façade and causes the temperature on the inside of the building to rise. (Frey Architekten, Germany) 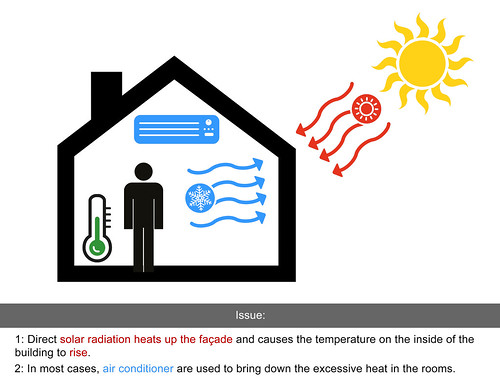 Figure 4. In most cases, an air conditioner is used to bring down the excessive heat in the rooms.(Frey Architekten, Germany)

Anyone who wants to stay cool in the summer and stay out of the sun will seek shade, for instance under trees. Figure 5 shows the effectiveness of shading very clearly. Temperatures are significantly lower in the shade. (In this example, the temperature variance between the façade exposed to sunlight and the façade in the shade is around 40° Celsius.)

The Principle of Shading 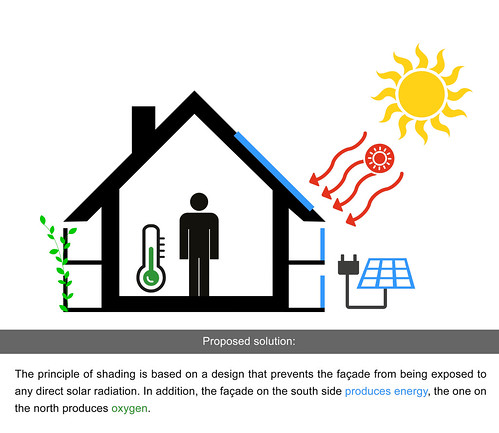 Figure 6. The principle of shading is based on a design that prevents the façade from being exposed to any direct solar radiation. (Frey Architekten, Germany)

This simple principle can also be applied to buildings (see Figure 6).

Living in a Tree House Is Easier Than You Think

Our buildings simulate the feeling of living beneath old trees: You have the feeling of being protected by the massive structure and the overhanging boughs, but you also have the freedom of open space beneath them, on the forest floor.

A Passive House is anything but passive. From smart use of the façade through the use of plants, proper paint, and openable windows, to attention to details to prevent thermal bridging, a PH requires a constant exchange of energy—from the inside out and back again.