If You Sell Electricity, You Should Be Worried

A version of this article appears in the Fall 2017 issue of Home Energy Magazine.
SHARE
Click here to read more articles about Editorials

Any way you look at it, residential electricity use in America is falling. Recent data from the Energy Information Administration show that electricity use fell 3% in total and 7% when calculated per person in the last five years. This is a lot of electricity, corresponding to a 300 kWh per year reduction per person, or about one refrigerator per home. The decline also appears to be widespread; for example, residential electricity consumption fell in 48 out of 50 states between 2010 and 2015 (Rhode Island and Maine being the outliers). This is encouraging news, but is it real? And what’s behind it?

The trend is almost certainly real. It spans several years, through wide variations in energy prices, weather, and economic conditions. This also occurred in the midst of the explosion of the Internet of Things—all powered by electricity—which people worried would increase electricity use. We can also probably exclude the possibility that Americans are choosing to be more frugal—colder in the winter, hotter in the summer, darker all the time—because that’s an unlikely response during a period of economic growth. 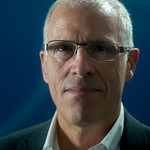 What other interpretations are possible? Hundreds of thousands of homeowners have installed PV systems. Their electricity production contributed to a 15% reduction in Hawaiian homes but much less in other states. Another factor to consider is the exceptionally low price of natural gas; perhaps some people have favored their gas appliances over electric ones when they have an option. This is probably a small adjustment. Higher summer temperatures (which are occurring in many parts of the country) would have increased air-conditioning electricity, so that would make the observed reduction even more impressive. 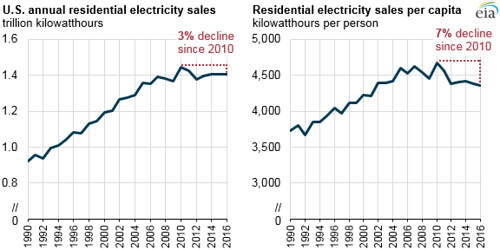 Following sustained growth through 2010, U.S. residential electricity sales have declined in both absolute and per capita terms.

The most likely explanation for this persistent downturn in electricity use is greater efficiency. Air conditioners, refrigerators, heat pumps, and a host of other devices use much less electricity than they did ten years ago. So as old units die, new, efficient models replace them. Tens of millions of these appliances have been replaced in the last five years, each time resulting in a downward bump in a home’s electricity use.

Then there’s the one-time impact of LEDs displacing hundreds of millions of incandescent bulbs (and CFLs). Unscrew a few incandescent bulbs, screw in a few LEDs, and save a few hundred kWh. It’s an action that is being repeated everywhere. This is the efficiency success story of the decade.

What happens next? This downturn in residential energy use is likely to continue. New, efficient appliances will continue to displace the older ones (although perhaps less dramatically if the Trump administration succeeds in the unwise defanging of mandatory standards). Electricity savings from PV installations will have an ever-growing impact, and new technologies will appear. Zero energy and passive homes—barely known a decade ago—are already appearing in every corner of the country. Homes will use less energy because these trends make them more comfortable, safer, and more economical. If you sell electricity, you should be worried.